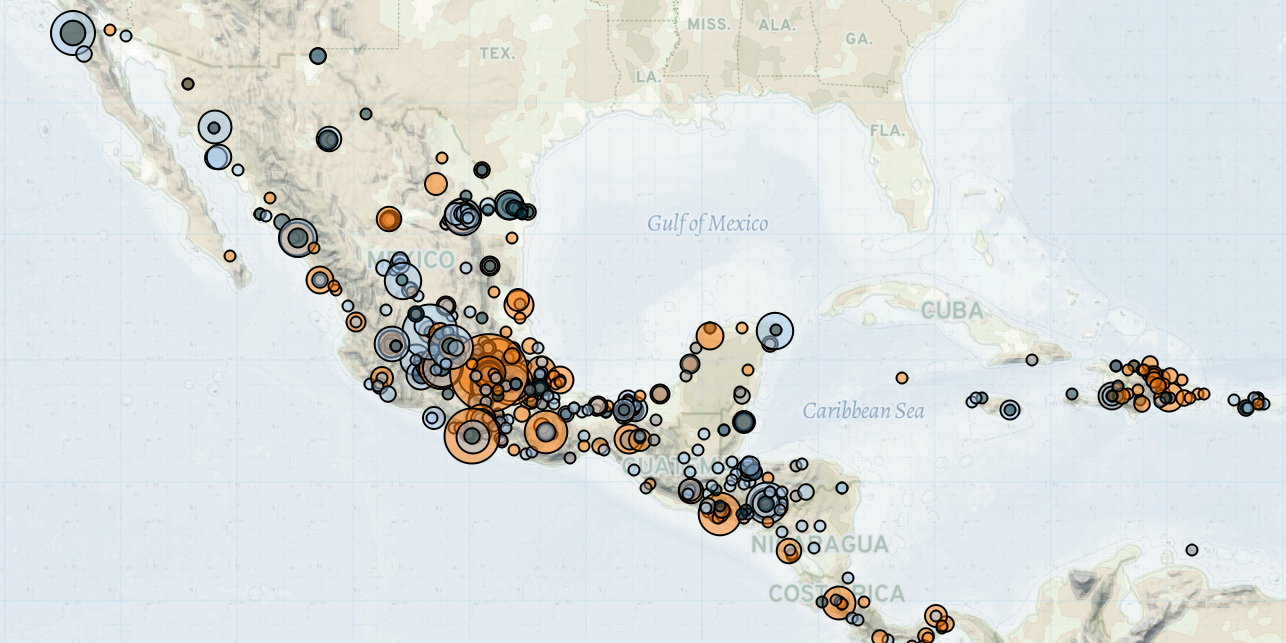 Last week, land conflicts continued across Central America, with attacks in Costa Rica, Guatemala, and Mexico. Demonstration events increased in comparison to previous weeks, especially in Costa Rica, Honduras, and Panama. Protests are motivated by issues with bad governance, stemming from a lack of access to water, poor infrastructure, and general insecurity.

In Guatemala, two people reportedly died and five were injured by gunshots due to land conflicts between the Markajam II and Rubelpec communities in Izabal department. The dispute over territorial boundaries between those two communities has been going on since 1996 (El Periodico, 5 March 2020).

Also, in Costa Rica, the struggle around land-grabbers and indigenous groups continued when a group of local farmers attacked and burned an area that was recently reclaimed by the Cabecar indigenous groups. The farmers proceeded to build a barricade to hamper access and threw rocks at arriving police officers. Indigenous groups regularly face attack by land-grabbers when reclaiming land that is granted to them by Costa Rican law (Prensa Latina, 7 March 2020).

In Mexico, an armed group attacked several communities of the Tzotzil indigenous group in Aldama, Chiapas. Though no fatalities were reported, these attacks caused displacements of the communities, resulting in men, women, and children taking shelter in the mountains (El Universal, 4 March 2020). The attack broke a non-aggression agreement that was signed by the residents in June 2019; the agreement sought to end a territorial conflict over 60 hectares of land between the municipalities of Aldama and Chenalhó dating back to the 1970s (Milenio, 4 June 2019). There are no reports yet on what triggered this attack nine months after the agreement.

Elsewhere, the protests of students who demand more security and justice for the victims of armed attacks continued last week in Puebla, Veracruz, Tabasco, Mexico City, and Guanajuato. In Puebla, there was a massive demonstration in which more than 100,000 students participated to demand more security (Sintesis, 06 March 2020). The protests were sparked by a fatal attack against three students and an Uber driver in Huejotzingo, Puebla at the end of February (La Verdad, 25 February 2020). While insecurity is a recurring issue for demonstrations in Mexico, students in Mexico are also quite active in taking to the streets to demand political and social change (CNN, 25 May 2012; Los Angeles Times, 26 September 2016).

Also, in Honduras, increasing insecurity has prompted widespread protests by taxi drivers. More than 22,000 taxis blocked roads in the cities Tegucigalpa, Comayaguela, Choluteca, Yoro, and El Paraiso, among others. The protesters demand protection from gangs who regularly target taxi and bus drivers for extortion, forcing them to pay a so-called “war tax” or face the risk of death (El Heraldo, 2 March 2020; InSight Crime, 7 June 2019). Taxi and bus drivers must drive in and out of spaces under the control of gangs; gangs will charge these drivers a “war tax” in exchange for not harming them.

Following the trend of the past two months, demonstrations against the mismanagement and shortcomings of water supply took place in Costa Rica, El Salvador, Honduras, Mexico, and Panama. The start of the school year has also prompted protests, with students and their relatives protesting against poor infrastructure and understaffed schools in Costa Rica and Panama.

In El Salvador, President Bukele declared a state of emergency in all prisons, in response to the second killing of a military officer within two weeks. The measure of placing all prisoners in total confinement is part of a security process in trying to gain control over the prisons and to prevent gang leaders from communicating with their members outside (BBC, 3 March 2020).

In Nicaragua, last week was marked by the funeral and burial of the poet and opposer to the Ortega regime Ernesto Cardenal. Both events were followed by attacks from pro-government groups against participants and journalists covering the events (Despacho 505, 4 March 2020, La Prensa, 6 March 2020).