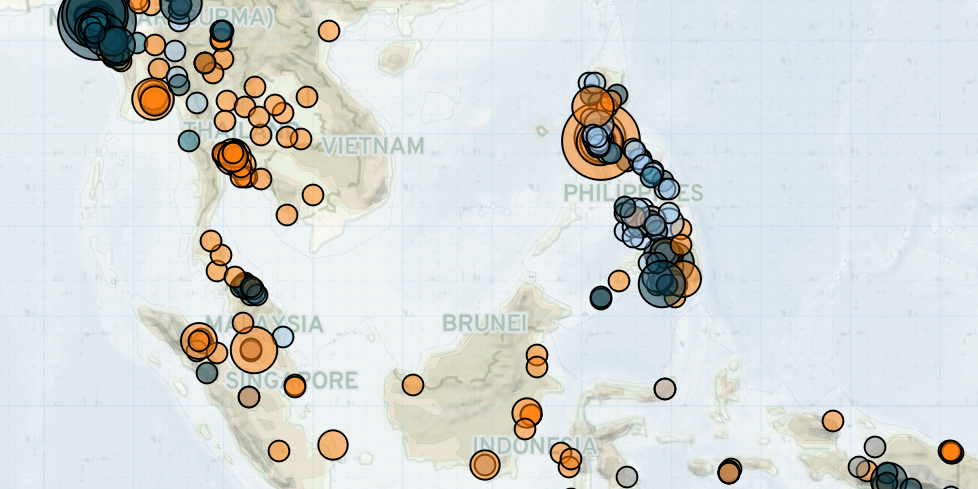 In Southeast Asia, key developments last week include: continued fighting in Rakhine state in Myanmar; ongoing pro-democracy protests across university campuses in Thailand; deadly clashes between state forces and Islamist rebels in the Philippines; demonstrations stemming from the political upheaval in Malaysia; and labor protests in Cambodia and Indonesia.

Clashes in Myanmar between the military and the United League of Arakan/Arakan Army (ULA/AA) continued last week in Rakhine state and southern Chin state. Civilians likewise continue to be injured and killed in the crossfire between the two groups. In Paletwa township, a civilian was killed last week during the ongoing fighting. As well, clashes between the military and the Restoration Council of Shan State/Shan State Army-South (RCSS/SSA-S), a signatory of the 2015 Nationwide Ceasefire Agreement (NCA), were reported in Shan state. As noted in a recent ACLED report, signatories to the NCA still clash with the military since the signing of the agreement.

Pro-democracy demonstrations on university campuses continued last week in Thailand led by students and other groups angered by the dissolution of the Future Forward Party. Meanwhile, as the government and Barisan Revolusi Nasional Melayu Patani (BRN) met in Malaysia for peace talks, separatist violence was reported in Narathiwat and Yala provinces. The government has stated that progress is being made in the talks with the BRN, the main separatist group in the deep south (Reuters, 4 March 2020).

In the Philippines, deadly clashes between state forces and the Bangsamoro Islamic Freedom Fighters (BIFF), an Islamic State-inspired group, occurred across Maguindanao, resulting in 18 reported deaths. The clashes come as the Philippines recently withdrew from the Visiting Forces Agreement with the United States, a decision which is now being challenged by the Philippine Senate before the Supreme Court (Al Jazeera, 9 March 2020).

Ongoing political turmoil in Malaysia led to a number of demonstrations last week. In the wake of Prime Minister Mahathir Mohamad’s resignation, a member of his Bersatu party, Muhyiddin Yassin, was appointed Prime Minister by the King. Muhyiddin broke away from the formerly governing Pakatan Harapan (PH) coalition, and instead allied Bersatu with the Malay-nationalist United Malays National Organization (UMNO) and the Islamist Malaysian Islamic Party (PAS) to form the Perikatan Nasional (PN) coalition. Many who supported the previous PH coalition government view the recent changes in the country as undermining Malaysia’s democracy (Asia Times, 1 March 2020).

Finally, labor protests were reported last week in Cambodia and Indonesia. In Indonesia, several protests over the ratification of the omnibus bill were held as dissatisfaction persists over the bill which is seen as anti-labor (The Jakarta Post, 9 March 2020).