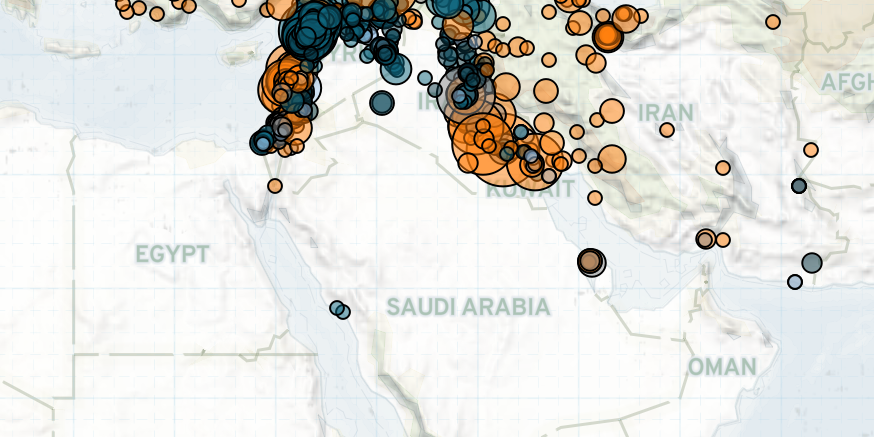 Last week in the Middle East, key developments include: continued fighting across most frontlines in Yemen; an escalation in Iraq following fatal rocket attacks against an Iraqi military base that hosts coalition forces; the maintenance of the Turkey-Syria ceasefire in northwestern Syria; and an overall decrease in demonstration events regionally due to fears of spreading the coronavirus.

Security in the south was restored after a brief spike in conflict. Pro-Southern Transitional Council (STC) forces reportedly deployed throughout Aden to increase stability. However, conflict between STC and pro-Hadi forces continued throughout the southern governorates, while clashes also increased between security forces and communal and tribal militias.

Meanwhile in Iraq, the protest movement continues to dwindle due to fears of coronavirus along with a general fear of attacks by security forces, which have targeted several activists over the past weeks. Most demonstration activity was reported in Baghdad, Basra, Kut, and Diwaniya cities, with decreased numbers compared to prior weeks.

Tensions between the US and Iran once again escalated in Iraq, after the Popular Mobilization Forces (PMF)-affiliated Kataib Hezbollah (KH) and Nujaba Movement reportedly fired at least 10 rockets at an Iraqi military base hosting coalition forces in Taji, north of Baghdad. While neither KH nor the Nujaba Movement claimed the attack, they praised it and expressed support for the perpetrators (Al Monitor, 13 March 2020). The attack reportedly killed two American soldiers and one British soldier, and injured 14 other coalition personnel (CNN, 11 March 2020).

A day later, joint US and UK retaliatory airstrikes targeted the 19th Division of the Iraqi army, a headquarters of KH, and the 3rd Babylon Police Regiment in Babylon and Kerbala provinces. The attacks reportedly killed three Iraqi soldiers, two policemen, and one civilian, and injured five PMF fighters. Infrastructure, equipment, and weapons at the targeted locations were completely destroyed (Al Monitor, 13 March 2020). US forces also launched airstrikes against KH and PMF locations in eastern Syria that reportedly killed 26 people. This represents an escalation in tensions between not only Iran and the US, but also involving Iraq. Previous attacks in January largely targeted the Iranian-backed PMF, but this series of attacks also targeted Iraqi military and police personnel. This puts additional pressure on Iraqi leadership, especially following the parliamentary vote in January, to expel US forces from the country, which has largely been ignored. This could further fuel unrest and calls for the government to take more active steps in expelling US and coalition forces from the country. Additionally, there were almost daily Turkish airstrikes in northern Iraq against the Kurdistan Workers’ Party (PKK). Meanwhile, IS has continued to increase its activities in Iraq, with two US soldiers reportedly killed in armed clashes with IS forces in the north of the country (NBC News, 9 March 2020).

In northwestern Syria, the ceasefire agreement between Turkey and the Syrian regime that came into force on 6 March continues to provide the Greater Idleb area some respite. This is despite repeated violations along the contact lines where regime and allied forces come up against opposition and Islamist factions. Meanwhile, Turkish and Russian forces commenced patrols along the key M4 highway, as per the agreement, with the participation of air elements, while Turkey continues reinforcing its troops on the ground in the area (Al Jazeera, 15 March 2020).

Most countries in the Middle East registered reduced numbers of demonstrations last week due to fears around the spread of the coronavirus. In Lebanon and Jordan, fewer demonstrations were held due to public health precautions as well as bad weather. In Iran, there were also fewer demonstrations as the country grappled with the spread of the coronavirus. In Israel, approximately 2,000 employees of El Al, an Israeli airline, demonstrated at Ben Gurion Airport against the company’s decision to lay off 1,000 employees and to put up to 80% of the remaining employees on unpaid leave (Jerusalem Post, 11 March 2020). El Al has halted a number of flights due to Israel’s quarantine restrictions over the coronavirus outbreak.

Despite the decline across most of the region, demonstration activity remained relatively high in Turkey. Over 50 protests were reported in Turkey last week, primarily over human rights and labor issues, though many others were cancelled or had lower participation due to precautions related to the coronavirus (T24, 14 March 2020).

In Palestine, clashes broke out again in the village of Beita, south of Nablus, as Palestinians tried to prevent settlers from seizing their land. During the violence, a 15-year-old Palestinian was shot and killed by Israeli forces with live ammunition. Israeli forces said 500 Palestinians participated in the clashes (BBC, 11 March 2020). In Kafr Qaddum, clashes erupted when Israeli forces suppressed the weekly anti-settlement march. There were also several incidents last week of armed settlers assaulting Palestinian civilians. Additionally, an Israeli youth was seriously injured by a stone thrown by a group of Palestinians in Huwwara, south of Nablus. Meanwhile, Gaza and the City of Bethlehem were placed under lockdown due to the Purim holiday and to prevent the spread of the coronavirus.