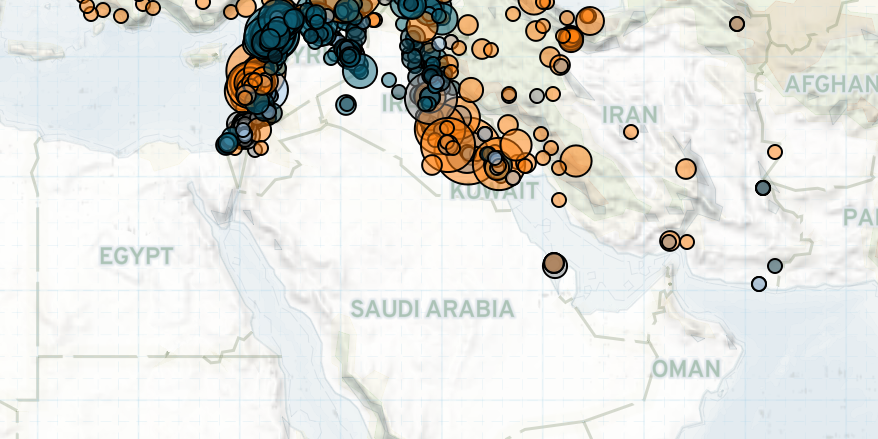 Last week in the Middle East key developments include: continued fighting in Yemen; a new prime minister-designate and reduced coalition activity in Iraq; relative calm in Syria’s Greater Idleb area; and prison riots in Iran, Jordan, and Lebanon over the threat of coronavirus.

In Yemen, pro-Houthi forces clashed with anti-Houthi forces repeatedly in Ad Dali, Hodeidah, and Marib governorates. Northwestern Ad Dali was a central focus of fighting for the third consecutive week. Fighting in Hodeidah increased last week after the pro-Hadi government announced the suspension of its participation in the Redeployment Committees (Asharq Al Awsat, 13 March 2020). Al Jawf was also the site of fighting between pro-Houthi and anti-Houthi forces but to a lesser extent. Pro-Houthi forces claim to control all of Al Jawf except parts of Khabb wa ash Shaaf district and the Al Hazm desert. However, the Saudi-led coalition continued to launch frequent airstrikes in Al Jawf against pro-Houthi forces, in addition to a number of airstrikes in Hajjah, Marib, Sadah, and Sanaa governorates.

Multiple clashes between pro-Southern Transitional Council (STC) and pro-Hadi forces were reported in central Aden, with some also occurring on Socotra. Pro-STC and pro-Hadi forces redeployed throughout Abyan governorate in contravention of the ‘Riyadh Agreement,’ reportedly to control access to Aden. Infighting was reported between pro-Houthi forces as well, with a number of clashes near the frontlines in Ad Dali, along the Sirwah front in Marib, and in Taizz. Pro-Houthi forces also carried out a campaign of abductions near frontlines in Ad Dali for yet unknown reasons. Pro-Houthi forces prevented people from entering Houthi-controlled territories amid fears of the coronavirus, forcing thousands to live without shelter or basic provisions. No cases of the coronavirus have been confirmed in Yemen as of yet.

Islamic State (IS) forces claimed two roadside bombings against anti-Houthi forces in the Qayfa area of Al Bayda governorate. Al Qaeda in the Arabian Peninsula (AQAP) did not claim any activity this week but did claim a prior attack from 5 March 2020 against pro-Houthi forces.

Last week in Iraq, President Saleh named Adnan Al Zurfi as prime minister-designate in an effort to end months of political deadlock. Zurfi was rejected by both the demonstrators, who believe he belongs to the political elite and does not represent their hopes for an independent candidate, and the main Shiite political parties (BBC, 17 March 2020). However, by the end of the week, demonstrators in Baghdad and across the country’s southern and central regions announced they would return to their homes until the coronavirus threat subsides (Asharq al-Awsat, 22 March 2020). While this may provide a brief reprieve for the Iraqi government, the demonstrations will likely return to the streets if authorities continue to fail to meet the movement’s demands

Additionally, the US-led coalition fighting IS suspended training of Iraqi forces citing fears of spreading coronavirus. This move coincides with an overall reduction of coalition activity in Iraq following recent rocket attacks reportedly carried out by Iranian-backed militias targeting bases hosting foreign forces (Reuters, 19 March 2020). This may also represent a move towards de-escalation with Iran, which could result in inadvertently giving Iran more sway in Iraq and also provide IS with an opportunity to launch more attacks. The risk of a power vacuum is most apparent in disputed areas such as Tuz Khurmatu, which has become the site of repeated attacks by unidentified groups over the past two weeks, as well as areas in Diyala province.

Meanwhile, relative calm took hold in the Greater Idleb area in Syria as a result of the 5 March ceasefire agreement between Turkey and Russia, despite some violations by both regime forces and the opposition and Islamist factions along the frontlines. During the past week, Turkey conducted at least four patrols along the M4 highway and Russia participated in one joint patrol. Two Turkish soldiers were reportedly killed in an explosion carried out by an unidentified group during one of the patrols. Turkey continued to intensify its presence in the area, bringing more military reinforcements and setting up two additional posts in Idleb.

At the end of last week, Syria confirmed its first case of coronavirus (The Guardian, 23 March 2020). The current situation in northwest Syria and in other parts of the country makes the catastrophic spread of the virus more likely in the absence of functional healthcare infrastructure. Even in regime-held areas, the health system may not be able to detect and respond to the pandemic. As such, a high number of undisclosed cases is to be expected.

Prison riots were reported in Iran, Lebanon, and Jordan over coronavirus fears amidst poor prison conditions and new restrictions. As a precautionary measure against the spread of the virus, Iran temporarily released 85,000 prisoners as of Tuesday of last week (Al Jazeera, 17 March 2020), though two prison riots took place in Lorestan province. One of the riots reportedly resulted in the escape of 23 prisoners, while another was shot and killed by prison guards. Iran also released a number of international prisoners, including French researcher Roland Marchal, in a prisoner swap, and has temporarily released a US navy veteran and a female British-Iranian dual national, both incarcerated on charges of espionage. In Jordan, two inmates were killed in a prison riot in Irbid after visits to inmates were banned to contain the spread of coronavirus. Riots also broke out in at least two overcrowded prisons in Lebanon as inmates feared the spread of the disease. Lebanese relatives of prisoners also held demonstrations calling for their release.

Meanwhile, the Palestine Liberation Organization (PLO) called on the UN to pressure Israel to release Palestinian detainees following reports of Palestinian prisoners testing positive for coronavirus in Israeli prisons. Some 500 Israeli prisoners were released to house arrest amid the crisis. Palestinian prisoners are planning to launch a hunger strike (Al Jazeera, 23 March 2020). This increasing trend of prison riots is likely to continue across the Middle East as prisoners have little reason to believe that the state is protecting them.

Three riots were also reported in Bahrain marking the anniversary of Saudi and Emirati security forces entering Bahrain in 2011 to put down unrest, and commemorating those killed in the uprising.