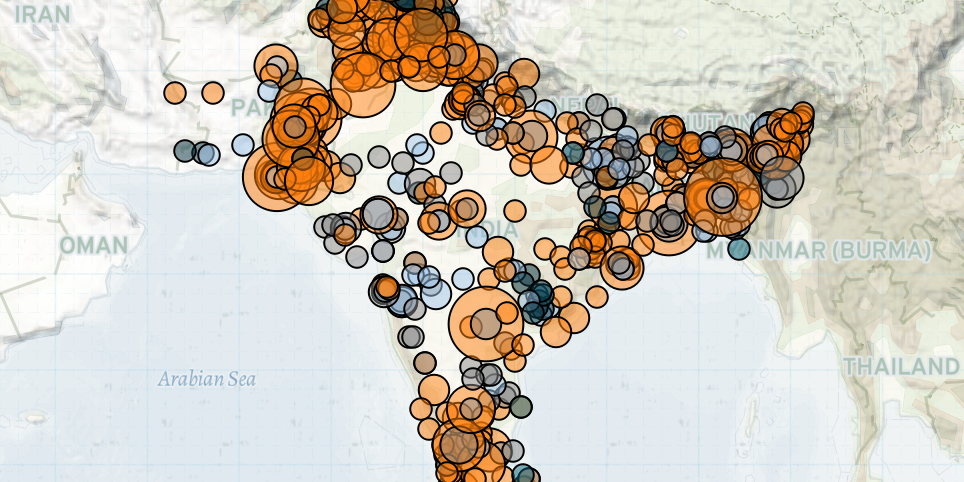 Key trends in South Asia last week include: continued security operations against domestic rebel groups in India; and continuing demonstrations and violence over the spread of coronavirus across South Asia.

Violent resistance against security forces trying to enforce coronavirus related lockdowns was reported in India, Pakistan and Nepal. In several states of India, including Gujarat, Assam, West Bengal and Uttar Pradesh, locals attacked and clashed with security personnel enforcing the lockdown. In Gujarat, hundreds of migrant workers clashed with security personnel in a bid to return to their native villages despite restrictions on movement of people across state boundaries during the lockdown (Hindustan Times, 30 March 2020). Clashes erupted as police attempted to disperse religious gatherings at several mosques in Bihar and Maharashtra. Similar clashes were reported in Pakistan, where police personnel attempted to enforce a complete curfew to prevent people from congregating during Friday prayers at local mosques. In Nepal, locals clashed with police personnel after they were prevented from opening a flea market defying the lockdown orders. Hundreds of Nepali citizens, including migrant workers, clashed with Nepali security personnel close to the Nepal-India border, in a bid to force their way into Nepal from India. The complete lockdown imposed in India, and the enforcement of a border lockdown by the Nepal government to reduce the spread of coronavirus, has left thousands of Nepali citizens stranded at the Nepal-India border (Al-Jazeera, 1 April 2020).

Several events of violence against social and health workers were recorded in India. In the states of Madhya Pradesh, Bihar and Kerala, locals attacked and injured health workers who were performing contact tracing and screening suspected coronavirus patients, out of fear of being identified and kept under quarantine. In Uttar Pradesh, a woman whose family prepared a list of persons who had come to their village from other cities, to be used in health examinations, was confronted and killed by an army personnel who took offense with his name being on the list. A man was lynched to death by locals in Bihar for informing the authorities about people who had returned back home after the lockdown.

Community fears prompted violence, pre-emptive measures and several demonstrations targeting suspected carriers of the virus. Locals assaulted migrant workers in India’s Arunachal Pradesh, while in several states including West Bengal and Jharkhand, migrant workers seeking to return home were refused entry to their villages. Locals in several villages reportedly erected barricades and armed groups of villagers guarded entry points to prevent outsiders from entering their villages (Al-Jazeera, 30 March 2020). Furthermore, in India and Sri Lanka, several demonstrations were recorded by locals against the burial and cremation of patients who died of coronavirus, fearing contamination of local communities.

Demonstrations were also reported across South Asia against government failures in the provision of protective equipment and facilities to contain the spread of coronavirus. In Pakistan, doctors and paramedics demonstrated to call for protective equipment to treat coronavirus patients. In Bangladesh, hundreds of tea garden workers demonstrated demanding protective equipment for work. In India, ward volunteers responsible for delivering government sanctioned rations demonstrated for the provision of masks and sanitizers. Additionally, doctors and nurses protested in Jammu and Kashmir over being provided substandard Personal Protection Equipment (PPE). In India and Nepal, migrant workers, stranded due to restrictions on movement of people, demonstrated demanding food, water and transportation to return to their native villages.

In other developments, the Indian government issued a notification introducing a new set of laws for the union territory of Jammu and Kashmir. The region’s limited autonomy which protected the region from demographic changes was revoked in August 2019 and the new domicile rights now provide the modalities for Indian citizens from other areas to settle permanently in the region. According to the new set of laws, several categories of Indian citizens, including those who have resided in the region for a period of 15 years, will be eligible to become permanent residents (Al-Jazeera, 3 April 2020). The opponents of the law including the former Chief Minister of Jammu and Kashmir claimed that the timing of the announcement amidst a nationwide lockdown due to the coronavirus outbreak, was aimed at preventing public outcry against the law (Hindustan Times, 4 April 2020).