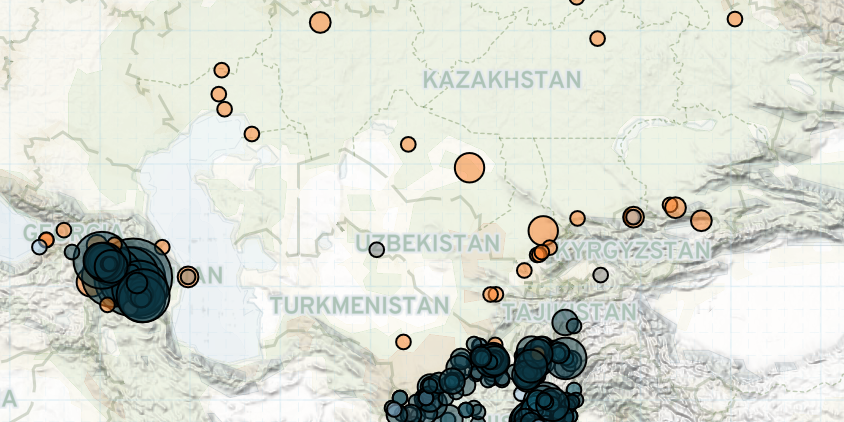 Last week in Central Asia and the Caucasus, the Taliban increased attacks on Afghan forces, and the spread of coronavirus led to multiple prison riots in Afghanistan. In Kazakhstan, medical workers protested, while Kazakh and Azerbaijani opposition activists claimed that state forces are using coronavirus restrictions to suppress dissent. As elections in the breakaway Republic of Artsakh created further controversy, ceasefire violations continued along the Armenia-Artsakh-Azerbaijan lines of contact.

In Afghanistan, violence continued at a slightly higher level compared to the week prior, with the Taliban launching the majority of attacks. However, pro-government forces also carried out approximately two dozen attacks targeting Taliban militants, following several weeks of a mostly defensive posture. According to the Taliban, the US military also conducted several air and drone strikes, although these reports have not been confirmed. Amidst fears that the continued fighting could derail the peace process, the commander of US forces in Afghanistan met with Taliban leadership in Doha on 10 April, reportedly to discuss the need to reduce violence (Reuters, 11 April 2020). Specific details about the meeting have not been disclosed. However, in a potential breakthrough following the meeting, the Taliban released 20 Afghan prisoners. This came only a week after the insurgent group walked out of talks with the government over a comprehensive prisoner swap and initially dismissed Kabul’s piecemeal release of captives as “unacceptable.” The government started to release Taliban inmates in groups of 100 on 7 April and has released approximately 400 prisoners at the time of this writing. According to Afghan officials, Taliban prisoners were released “based on their health condition, age and length of remaining sentence as part of our efforts for peace and containment of COVID-19” (Khaleej Times, 10 April 2020).

Afghan President Ashraf Ghani also ordered the release of 10,000 non-combatant prisoners amidst concerns over the spread of the coronavirus. A prison riot was reported on 30 March in the province of Herat, where female inmates, excluded from the pardon list, injured at least five prison guards (Afghanistan Times, 30 March 2020). A second prison riot took place in Paktia province, during which two prison guards were reportedly killed and a number of inmates were wounded. A member of the Paktia provincial council suggested that some high profile members of the Taliban were among the rioters and had escaped from the prison, although this has not been confirmed (TOLOnews, 11 April 2020). It is unclear if the latter prison riot was also triggered by coronavirus fears. So far, Afghan authorities have confirmed 714 cases of coronavirus infections and 23 deaths in the country (BBC News, 14 April 2020).

In Kazakhstan, health workers held protests in Aktobe and Atyrau cities last week over deteriorating working conditions amid the coronavirus outbreak. On 10 April, ambulance paramedics protested in Aktobe because they could not benefit from the additional compensation provided to other health workers, despite their frequent exposure to the virus. The paramedics claim that they are at constant risk of infection in the course of their work addressing medical emergencies. Health workers in the regional hospital facility of Atyrau city also protested after they were informed that the hospital was being quarantined on short notice. They raised concerns over how the authorities were handling the coronavirus crisis, as some of the staff and patients are now to be transferred to another facility outside the city that is reportedly in poor condition. In a separate development, activists expressed concern over the government’s enforcement of strict measures to fight the pandemic after members of the opposition were detained for criticizing the emergency legislation and sharing related protests on social media channels (RFE/RL, 8 April 2020).

In Azerbaijan, the government is accused of using the tight quarantine regime to target the opposition. A number of political activists have been charged with spreading false information on social media accounts. Some activists claim the police arbitrarily visited them at their homes, and a member of the Azerbaijani Popular Front Party was sentenced to 30 days in prison on account of “violating the quarantine rules” – details of which were not provided (OC Media, 24 March 2020; JAM News, 9 April 2020).

In the contested Republic of Artsakh, public unrest over the disputed presidential election continued despite the risk of coronavirus. Since early March, opposition protesters gathered in Stepanakert demanding the cancellation of the elections over monitoring and transparency concerns. On March 31, the Former Minister of Foreign Affairs, Masis Mayilyan and the former Prime Minister Arayik Harutyunyan became the leaders of the first round, but Mayilyan withdrew from the second round expressing his concerns about the elections taking place during the coronavirus pandemic. This led to Arayik Harutyunyan winning the second round as the only candidate running, casting more doubt on the fairness of the elections. The election was particularly important because the incoming president will hold expanded powers as a result of the country’s recent shift to a fully presidential system (JAM News, 13 April 2020). Critics also claim that a democratically elected government in Artsakh is especially important for Armenia, which plans to bring the de facto government into peace negotiations to contest Azerbaijan’s sovereignty over the region (Eurasianet, 6 April 2020).