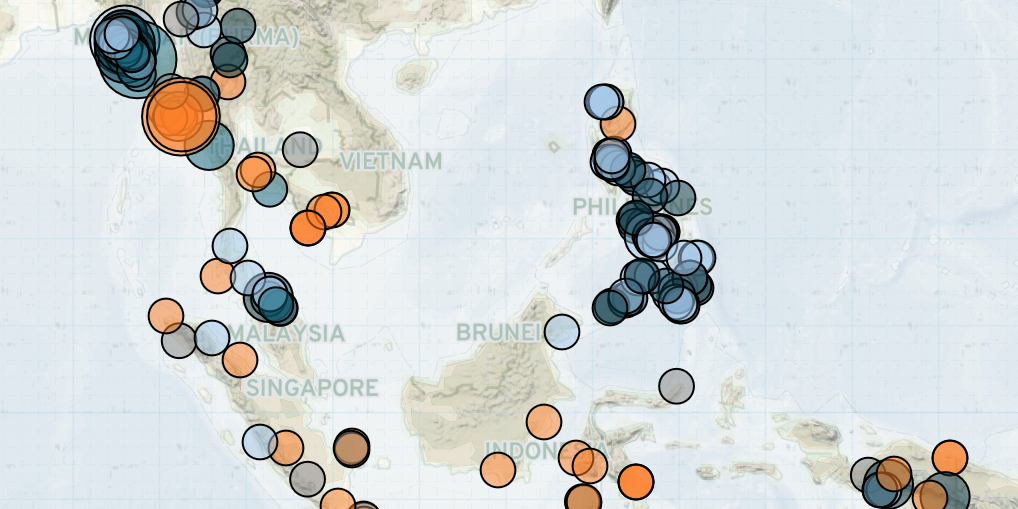 In Southeast Asia, key developments last week include: civilian deaths amidst ongoing fighting in Myanmar; clashes between state forces and Papuan separatists in Indonesia; continued breaches of the unilateral ceasefires declared by state forces and communist rebels in the Philippines; and ongoing coronavirus-related violence and demonstrations.

As occurs almost weekly now, civilians in Myanmar were killed during clashes between the Myanmar military and the United League of Arakan/Arakan Army (ULA/AA). In Paletwa township in southern Chin state, seven civilians were reportedly killed by a military airstrike on a village. Clashes were also reported in Shan state between state forces and the Palaung State Liberation Front/Ta’ang National Liberation Army (PSLF/TNLA), an ally of the ULA/AA. The Myanmar military has remained resistant to calls for a ceasefire declaration in response to the United Nations’ global appeal during the coronavirus pandemic (The Diplomat, 7 April 2020).

No separatist violence was reported in Thailand last week after the Barisan Revolusi Nasional Melayu Patani (BRN) declared a de facto ceasefire in light of the pandemic (Benar News, 7 April 2020). Separatist violence was reported in Indonesia though, as state forces pursued Papuan rebels in the wake of an attack the previous week on employees of the Freeport mine. The separatist West Papua National Liberation Army (TPNPB) floated the idea of a ceasefire last week, predicated on Indonesian state forces withdrawing from the region. The Indonesian government has not responded to this offer (Benar News, 10 April 2020).

Despite the declaration of unilateral ceasefires by the New People’s Army (NPA) and state forces in the Philippines, clashes between the groups have continued for the second week. Meanwhile, as the entire Luzon island, which includes regions known to be hotspots for drug-related violence (see this ACLED Press Release), remains under lockdown, drug-related violence appears to have been concentrated elsewhere in the country last week (in more southern parts). Police raids and vigilante violence against drug suspects were reported in Soccsksargen and Central Visayas.

Finally, demonstrations and organized violence were reported across the region over coronavirus-related concerns. In Thailand, a village chief shot and killed a monk and a layperson as they broke a curfew imposed due to the virus. In Indonesia, a demonstration was held against the use of a public building to quarantine coronavirus patients. In Myanmar, factory workers staged a protest calling for protective equipment to guard against the spread of the coronavirus. Lastly, in the Philippines, amid mass arrests of violators of coronavirus lockdown measures, the police destroyed protest signs outside a community kitchen run by Kadamay, an organization that has often been “red-tagged,” targeted by the government for alleged links to communist rebels (Bulatlat, 6 April 2020).