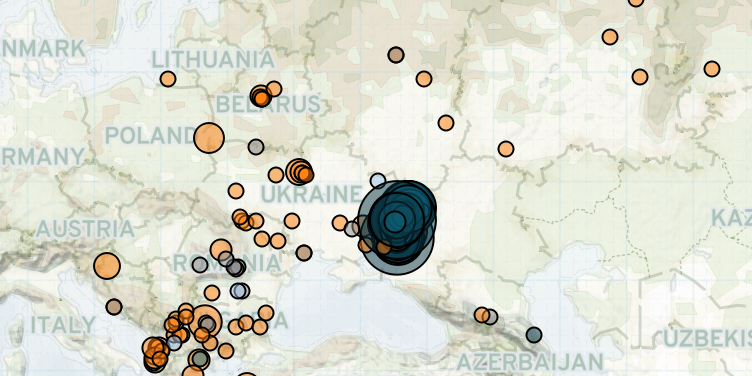 Last week, demonstration event numbers remained low across the Balkans, Southeastern Europe, Eastern Europe and Russia. Most demonstrations were held over government measures relating to the coronavirus crisis. Notable were protests and riots by members of the Romani community in Bulgaria and Romania, who face stigmatization and are disproportionately targeted by quarantine measures.

In Bosnia and Herzegovina, citizens quarantined in Sarajevo went on a hunger strike because they have been held in quarantine for over two weeks due to the coronavirus without being tested (N1, 20 April 2020).

The Albanian Parliament voted to extend the state of emergency due to the coronavirus until 23 June, thus allowing the government to restrict certain human rights and freedoms  (Exit Albania, 24 April 2020). Various labor groups, including traders, manufacturers, and farmers, held protests, demanding to receive government relief and unpaid salaries, as their businesses face bankruptcy or economic hardship.

In Bulgaria, Romani citizens in Sofia held another protest against the quarantine of their neighborhood, which had been set up last week due to the coronavirus spread. Amnesty International has criticized stigmatizing quarantine measures that disproportionately target Romani settlements (Amnesty International, 21 April 2020).

Teachers and students protested across Greece against education reform, which they believe was proposed during the coronavirus pandemic to circumvent public scrutiny (Greek Reporter, 24 April 2020).

In Moldova, the separatist Transnistrian authorities prolonged the emergency state until 15 May and began to enforce censorship to prevent false information regarding the availability of medical supplies (Ziarul de Garda, 22 April 2020; Novosti Pridnestrovya, 21 April 2020). Locals of a quarantined village in the Edinet district protested over the lack of access to their agricultural lands (TV8, 23 April 2020).

In Belarus, the arrests of three protest leaders led to increased attendance at the weekly environmental protest in Brest, where some protesters also called for President Lukashenka’s resignation (Viasna, 20 April 2020). Entrepreneurs protested in Minsk, demanding lower rent prices from a market hall as their income was affected by the coronavirus crisis  (Svaboda.org, 24 April 2020).

In Russia, several demonstrations were held over the coronavirus crisis. The largest took place in Vladikavkaz, where reportedly up to 2000 demonstrators gathered (Vedomosti, 24 April 2020; RFE/RL, 21 April 2020), some denying the existence of the pandemic and others decrying the lockdown measures that left them without a source of income. Demonstrators clashed with police, causing light injuries to at least 13 police officers, with police eventually dispersing the demonstration and detaining at least 69. In addition, a fully digital protest movement using the map function of the popular Yandex platform spread across several cities (Meduza, 20 April 2020).

Entrepreneurs staged protests in several cities across Ukraine, demanding the right to open up amidst the coronavirus lockdown (Radio Svoboda, 22 April 2020). In Donbas, after two relatively calm weeks leading up to the exchange of prisoners on 16 April (AP, 16 April 2020), fighting between Ukrainian government forces and separatist rebels sprung back up last week, with 116 armed clashes and 147 shelling incidents resulting in one reported fatality.