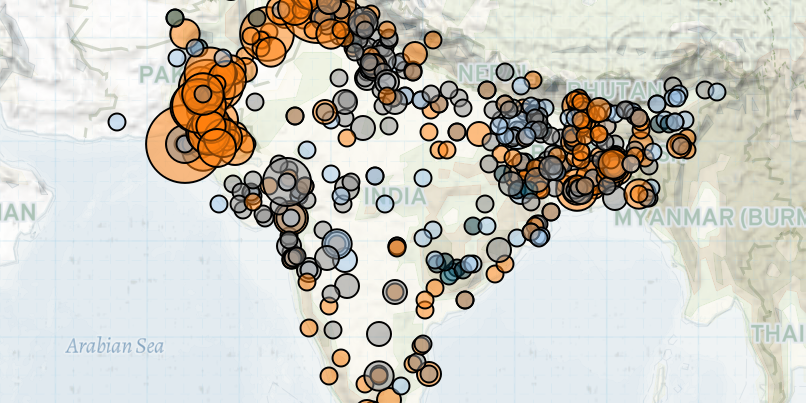 Key trends in South Asia last week include: armed clashes between security forces and domestic rebel groups in India and Pakistan; a continued rise in violence targeting frontline health workers over fears of coronavirus transmission in India; and unrest across South Asia over government actions to address the pandemic.

In India, armed clashes between security forces and domestic rebel groups continued last week. In Jammu and Kashmir, domestic rebel groups made several attempts to target security personnel. A police constable was abducted in the Shopian district while three security personnel were injured in a grenade attack in Budgam district. Nine militants affiliated with Hizb-ul-Mujahideen (HM), Ansar Ghazwat-ul-Hind (AGuH), and Lashkar-e-Taiba (LeT) were killed in several clashes with security forces. An increase in violence is expected in the coming weeks, as competing militant groups, including the newly formed Resistance Front, vie for greater influence in the region (Outlook, 26 April 2020).

In Pakistan, several clashes were reported between security forces and Tehreek-i-Taliban Pakistan (TTP) militants. In Khyber Pakhtunkhwa province, four security personnel and 10 TTP militants were killed during security operations and attacks on security check posts. Despite claims by Pakistani security forces that militancy has been largely rooted out, frequent clashes have continued in the former TTP strongholds along the Afghanistan border (Gandhara, 20 April 2020). At least six security personnel and 16 militants have been reported killed in April.

In India, panic over the possibility of mass community spread via health workers has led to increased attacks on medical professionals (Bloomberg, 14 April 2020). In Haryana state, a mob attacked a doctor working in the coronavirus ward of a local hospital over fears of transmission. In Karnataka state, at least 54 people were arrested after they attacked health workers who attempted to shift secondary contacts of a coronavirus patient to quarantine centers. Similar incidents were also reported in other states including Madhya Pradesh, Odisha, and Tamil Nadu. Additionally, in Uttar Pradesh and Nagaland states, police personnel assaulted health workers for violating the lockdown measures implemented to curb the spread of coronavirus, even though the medical teams were providing sanctioned essential services.

In India and Bangladesh, locals continued to violently resist lockdown measures. In several states of India, including Jharkhand and Uttar Pradesh, people gathered at mosques and clashed with police personnel who attempted to stop them from congregating in large numbers for Friday prayers. In Bihar state, armed locals fatally shot a man for reportedly advising them to maintain social distancing during the coronavirus lockdown. In Bangladesh, Jubo League activists assaulted and injured at least seven policemen and two journalists when the police attempted to disperse their gathering and enforce the coronavirus lockdown.

Demonstrations were also reported in India and Pakistan against government failures to provide protective equipment and facilities to contain the spread of coronavirus. In Pakistan, doctors and paramedics demonstrated against the lack of personal protective equipment (PPE) available for frontline medical staff. In India, health workers, paramedics, and prison staff recorded demonstrations demanding safety equipment and protective gear.

US Research Manager
Ashik KC is the US Research Manager at ACLED. He holds an MA in Peace and Conflict Research and a PhD in Political Science. His research interests include ethno-territorial conflicts and the role of regional organizations in conflict resolution.
Category: Regional Overviews30 April 2020
Tags: BangladeshIndiaNepalPakistan
Share this post
TweetShare on Twitter Share on FacebookShare on Facebook Share on LinkedInShare on LinkedIn

Ashik KC is the US Research Manager at ACLED. He holds an MA in Peace and Conflict Research and a PhD in Political Science. His research interests include ethno-territorial conflicts and the role of regional organizations in conflict resolution.