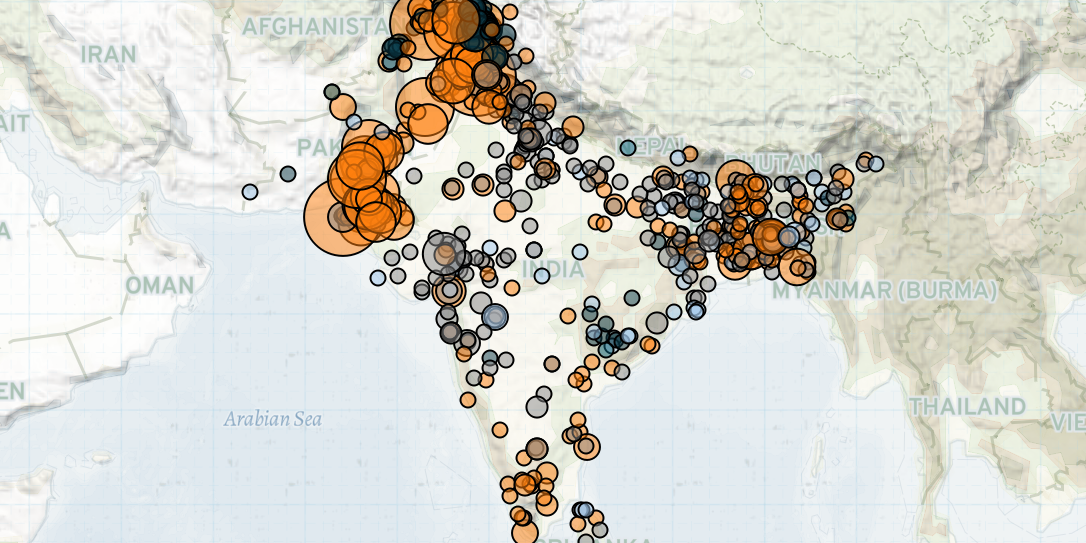 Key trends in South Asia last week include: an escalation in armed clashes between security forces and domestic rebel groups in Jammu and Kashmir (J&K); cross-border armed clashes between Pakistani and Indian military forces; and continuing violence targeting frontline health workers and members of the Muslim community over fears of coronavirus transmission in India.

In India, security forces intensified cordon and search operations amid reports of local recruitment and infiltration attempts by militant groups at the India-Pakistan border in J&K (Economic Times, 28 April 2020). At least nine militants, including the Deputy Emir of Ansar Ghazwat-ul-Hind (AGuH), were reportedly killed during the operations. The AGuH is a known Al Qaeda cell in the region. Five security personnel were also killed when they attempted to storm a house to rescue hostages held by militants. Special forces reinforcements later fatally shot two militants and rescued the hostages (New York Times, 3 May 2020).

Additionally, reported fatalities increased during cross-border clashes between Indian and Pakistani forces in the Kashmir region. Fourteen fatalities, including Indian and Pakistani security personnel and civilians, were reported during the exchanges. Routine cross-border clashes have continued despite nationwide lockdowns to curb the spread of coronavirus in both countries. Over 60 fatalities have been recorded since the beginning of lockdown.

In Pakistan, a prominent Pashtun rights activist and senior leader of the Pashtun Protection Movement (PTM) died after being injured in a drive-by shooting in Khyber Pakhtunkhwa province. He was released from prison earlier last week after being detained for sedition charges. No group has claimed responsibility for the attack; PTM members have a history of being targeted by both militants and security forces. PTM have faced stiff opposition from security forces over their criticism of human rights abuses by Pakistani forces during anti-militancy operations in the Pashtun-populated former Federally Administered Tribal Areas (FATA) (Gandhara, 2 May 2020).

Elsewhere in Pakistan, clashes were reported between security forces and domestic rebel groups. Two security personnel and nine suspected Tehreek-i-Taliban Pakistan (TTP) militants were killed during a clash in the North Waziristan district of Khyber Pakhtunkhwa province. In Balochistan, four Baloch Liberation Front (BLF) militants were killed during an operation by Pakistani security forces. The BLF and several other armed Baloch nationalist groups have been battling the Pakistani security forces for over a decade demanding independence for Balochistan and control over the province’s natural resources.

In India, frontline health workers and members of the Muslim community continued to be targeted with violence. Fear over the possibility of large-scale transmission from health workers and Muslims have fueled routine attacks against both groups. Last week, health workers collecting information and tracing potential coronavirus patients were assaulted in several states including Haryana, Uttarakhand, and Uttar Pradesh. In Punjab, a Muslim shopkeeper and his family were assaulted by a mob fearing the spread of coronavirus. The latest attack came as a legislator belonging to India’s governing Bharatiya Janata Party (BJP) made a call to boycott Muslim vendors as “a precautionary measure to protect people from getting infected” in a video that went viral (Al Jazeera, 29 April 2020). Locals also continued to use violence to defy lockdown measures in India. In several states, including Maharashtra, Gujarat, and Assam, Muslims gathered at mosques to perform rituals associated with the holy month of Ramadan, leading to clashes with police personnel who attempted to enforce social distancing and prevent large congregations.