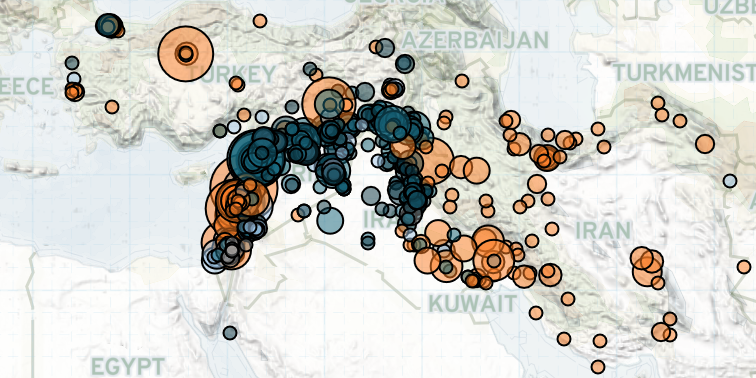 Political violence and demonstrations decreased across the Middle East last week. Though demonstrations increased in Iraq and Iran, the uptick was not enough to offset the overall downward trend. Meanwhile, Islamic State (IS) attacks in Iraq and Syria continued to rise, indicating that instability and anti-coronavirus measures in both countries are likely allowing the group to consolidate resources and prepare for new offensives.

In Yemen, Houthi forces faced backlash in Al Bayda governorate over the killing of a woman on 27 April 2020 and the subsequent protection of the fighters who killed her (Asharq Al Awsat, 7 May 2020). Tribal groups and Houthi forces have sent reinforcements to the Radman Al Awad district of Al Bayda governorate in anticipation of fighting as mediation efforts fail. Elsewhere in Al Bayda governorate, anti-Houthi forces regained territory in As Sawadiyah, As Sawmaah, and Mukayras districts following significant battles. Intense clashes were also reported on the Qaatabah front in northwest Ad Dali, the Sirwah front in western Marib, and the Qaniyah front on the Marib-Al Bayda border.

In the wake of the 26 April declaration of self-administration by the Southern Transitional Council (STC), instability has increased throughout the south. Following a week of widespread pro-STC demonstrations in Hadramawt governorate, the governor declared demonstrations illegal and deployed troops in Al Mukalla City to prevent their reoccurrence. However, pro-STC demonstrations proliferated in major cities of Abyan governorate. Two assassination attempts were reported in Aden, and anti-STC riots broke out over the government’s lackluster response to deteriorating health conditions and the poor provision of basic services like electricity. Multiple attacks on civilians were reported in Taizz governorate as well as one attack on civilians in Lahij governorate. In contrast, the conflict in Socotra has diminished as pro-Hadi forces supported by the Saudi-led coalition appear to have regained control of the island for now.

Despite the escalating economic crisis in Lebanon, fewer demonstrations occurred last week compared to the week prior. Protest activity remained largely peaceful, with sporadic riots involving Molotov cocktails thrown at banks, particularly in Tripoli. As Lebanon’s poorest city, Tripoli is hardest hit by the current crisis, and is the site of the most violence. The anger directed at banks is linked to their perceived role in precipitating the crisis. As Lebanon turns to the International Monetary Fund (IMF) for funding, the government must contend with a largely unemployed and increasingly impoverished population, which could turn to violence as the situation deteriorates. The current economic crisis constitutes one of the greatest threats to Lebanon’s stability since the country’s civil war (VOA, 11 May 2020). For more, see this recent CDT Spotlight on demonstrations in Lebanon.

In Iran, workers across various sectors protested over unpaid salaries, unfavorable contracts, and unemployment, culminating in a 30% increase in demonstrations compared to the week prior. The spike comes as the number of coronavirus infections and fatalities continues to fall, possibly portending a return to widespread protest activity. Concern with the perceived mismanagement of the coronavirus outbreak along with lingering anger over both the violent suppression of demonstrations in November 2019 and the accidental downing of a passenger plane in January 2020 could all lead to escalating unrest in the coming months, if not weeks. For more, see this recent CDT Spotlight on riots and protests in Iran.

In Turkey, clashes between the Kurdistan Workers’ Party (PKK) and the Turkish military continued with 12 battles and attacks reported in Hakkari, Bitlis, Agri, Batman, Tunceli, Adiyaman, and Sirnak provinces.

Meanwhile, multiple protests were reported in Turkey over the death of a prominent leftist musician, Ibrahim Gokcek, who died after a 324-day hunger strike in prison. More protests are expected next week (Ahval, 7 May 2020). Gokcek is the second member of the popular band ‘Group Yorum’ to die on hunger strike after being imprisoned.

In Iraq, Mustafa Al Kazimi officially became Prime Minister (PM) after the parliament gave him its vote of confidence along with all but five ministerial nominees for his proposed cabinet (Kurdistan24, 7 May 2020). This comes after a five-month-long political deadlock that followed the resignation of the former PM due to pressure from the country’s mass protest movement, which began in October 2019. On the day of the vote, three rockets fired by an unidentified armed group struck near Baghdad airport. After gaining the approval of the parliament following weeks of negotiations with various parties and coalitions, the PM’s attention turned to the demonstrators and efforts to quell the unrest. Al Kazimi proposed to release detained anti-government protesters and both reinstate and promote Lieutenant General Abdul Wahab Al Saadi (Al Jazeera, 10 May 2020). The general’s mysterious demotion last year was viewed as one of the main sparks for the protest movement. While these proposals are a promising start, they may not be enough to keep the demonstrations from re-erupting, as the government is still made up of the same political class that the movement originally rose up against. Already last week protest activity rose to its highest numbers since the start of the coronavirus curfew. Protests took place in Baghdad for the first time since their suspension in March, as well as Nassriya and Najaf cities. For more on Iraq’s protest movement, see this recent ACLED report.

Meanwhile, large protests took place in Iraqi Kurdistan denouncing the inability of the Kurdistan Regional Government (KRG) to pay its employees their salaries and – for the first time – demanding the removal of the government (ROJ News, 7 May 2020). These have been the largest protests in a series of demonstrations by labor groups in recent weeks calling for the payment of their salaries and denouncing the economic conditions in the region.

At the same time, IS continues to increase attacks in Iraq amid security disputes between the KRG and the central government in Baghdad.

In Syria, IS attacks against both the Syrian regime and the Syrian Democratic Forces (QSD) increased in April, with more than double the number of attacks reported in March. Attacks last month were mainly concentrated in eastern Syria. The two-fold increase could mean that IS has carved out breathing room to regroup amidst the unstable security situation and the coronavirus outbreak. During the first week of May, five IS attacks against regime and QSD forces were reported. These attacks are likely to continue in the coming weeks.

Elsewhere in Syria, Israel launched airstrikes targeting regime and pro-Iranian militia forces for the fourth consecutive week. While the number of airstrikes has varied throughout this period, the geographical spread has expanded to include Aleppo and Homs. In southern Syria, the regime’s arrests of former fighters and civilians led to increased fighting between regime forces and former opposition fighters in Dar’a. This has exacerbated the tense security situation and may lead to a rise in regime military operations in the area.

Meanwhile, the rift within Syria’s ruling Al Assad family has resulted in several arrests of employees of Rami Makhlouf’s businesses. It is widely believed that the regime’s move against Makhlouf – a business tycoon and Bashar Al Assad’s cousin – is part of an effort to take over his business empire in Syria. While this is unlikely to affect broader dynamics in the country in the short-term, it points to a widening gap within the ruling family and the regime’s base of supporters.