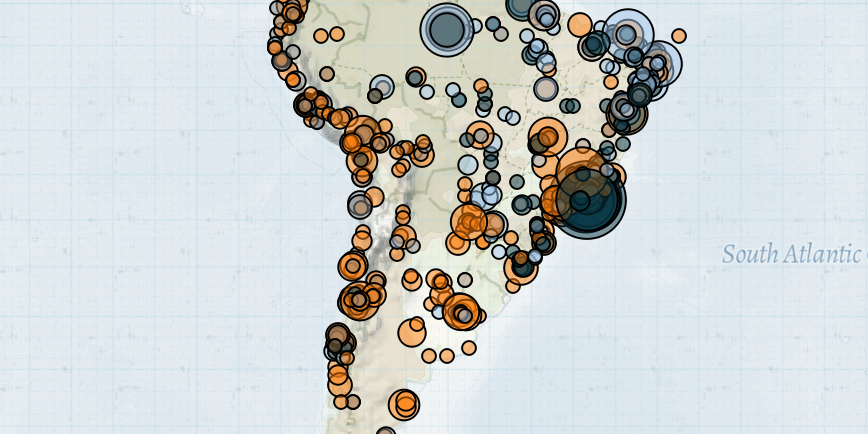 Last week in South America, key developments include: protests led by health workers around the region; a failed coup plot in Venezuela; intensified indigenous militia activities in Chile; insurgent activity in Paraguay; increased political tensions in Guyana as a ballot recount begins; and demonstrations against quarantine measures and in support of President Jair Bolsonaro in Brazil, as well as continued armed clashes between criminal groups and state forces.

Health workers continued to protest across the region, with events reported in Bolivia, Brazil, Chile, Paraguay, Peru, and Venezuela. The protesters call for better working conditions and proper protective equipment as they treat patients infected with the coronavirus.

In Venezuela, on 3 May, security forces clashed with a group of armed individuals in Vargas state, killing eight people and detaining two. President Nicolas Maduro accused the men of attempting to stage a coup with the help of the United States and Colombia. Maduro claimed that one of the detainees is an agent of the American Drug Enforcement Administration (DEA) (The New York Times, 3 May 2020). The following day, in Aragua state, a group of unidentified armed individuals, including two Americans and two former Venezuelan police officers, were arrested by security forces. Analysts suggest the failed plot will likely strengthen Maduro’s image in the country and worsen the public perception of the opposition (The Guardian, 12 May 2020, Foreign Policy, 8 May 2020).

In Chile, tensions increased in the Biobío region, where at least 10 armed men attacked three trucks belonging to a logging company. During the incident, one truck driver was injured and the vehicles were set on fire. Indigenous militias are suspected to be behind the recent attacks, as several groups are active in the country’s south, where they demand restitution of their land rights in areas controlled by forestry companies (Minority Rights Group International, 2020).

In Paraguay, suspected members of the Paraguayan People’s Army (EPP) took farmers as hostages and set fire to equipment in two different locations in Concepción and Amambay departments. The EPP, the main insurgent group active in Paraguay, is a small left-oriented armed organization that aims to revendicate expropriated land belonging to businessmen. The group conducts sporadic attacks on farms along the border with Brazil, but it has also been involved in extortion and kidnapping targeting political authorities in recent years.

In Guyana, the long-expected recount of votes from the 2 March elections kicked off. In Georgetown, protesters picketed outside the President’s residence after international observers were denied entry into the country due to coronavirus. A few days later an altercation between Partnership for National Unity and Alliance for Change (ANPU+AFC) supporters and a member of the ‘Guardians of Democracy’ led to one arrest (iNews Guyana, 5 May 2020, Kaieteur News, 10 May 2020).

In Brazil, workers and businessmen continued to protest against social distancing measures. While teachers, transportation drivers, and street vendors demanded financial aid during the crisis, businessmen called for the re-opening of business and downplayed the seriousness of the pandemic. On 3 March, protest events in support of President Jair Bolsonaro were held in several cities, despite reinforced quarantine measures imposed by municipal and state authorities. At several of these events, protesters publicly opposed the country’s democratic institutions, such as the National Congress and the Supreme Court of Justice. In Brasília city, demonstrators once again attacked journalists, forcing them to leave the venue under police protection. Press organizations denounced the increase in attacks against media workers in Brazil and warned about a decline in press freedom (RSF, 5 May 2020).

The number of attacks on civilians perpetrated by drug trafficking groups and police militias decreased compared to the previous week, with 28 reported events across the country.