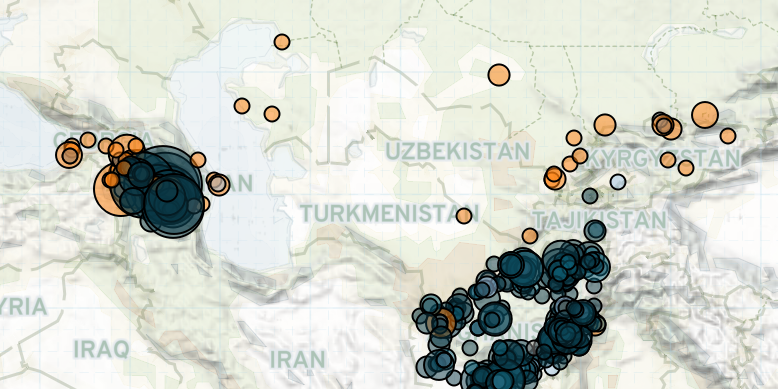 During the past two weeks in Central Asia and the Caucasus, deadly clashes continued in Afghanistan, though an unexpected truce by the Taliban decreased violence significantly. Protests related to coronavirus measures continued in Kazakhstan and Kyrgyzstan, as new regulations on civil society organizations and public events caused unrest in both countries. Border violence continued between Kyrgyzstan and Tajikistan. Chinese workers of a zinc mine staged a violent demonstration in Tajikistan’s Sughd region. Lastly, ceasefire violations between Azerbaijan and Armenia took place at similar levels to weeks prior, though the Azerbaijani army reportedly conducted two new attacks on the Armenia-Azerbaijan-Artsakh Lines of Contact.

In Afghanistan, fighting between pro-government forces and the Taliban intensified in the third week of May following Afghan President Ashraf Ghani’s order to resume offensive operations. Afghan forces conducted several ground and aerial operations against the Taliban, regaining territories in the provinces of Herat, Kunduz, Jowzjan, and Badakhshan. Taliban fighters also launched dozens of attacks, including a suicide bombing in Ghazni province that targeted a base belonging to the country’s intelligence service, reportedly killing at least nine members of the National Directorate of Security and injuring 40 others. During the period between 17 and 23 May, more than 530 fatalities were reported in Afghanistan.

Yet, events in Afghanistan took a surprising turn on 23 May: Taliban leadership announced a three-day truce with the Afghan government for the Muslim festival of Eid al-Fitr. The insurgent group announced a similar Eid ceasefire in 2018 but had rejected calls for a truce at the start of the holy month of Ramadan earlier this year (BBC, 24 May 2020). The Afghan government welcomed the announcement, and both sides have so far largely respected the ceasefire more than a week beyond the initial three-day period. In the last week of May, only over 15 violent encounters between the Taliban and pro-government forces were reported in Afghanistan, a drop of more than 85% compared to the week prior. Taliban leadership has not yet commented on whether or how long the truce will hold. But the insurgent group has released more than 150 Afghan security forces in the last week, reciprocating the Afghan government’s move to release more than 1,700 since the ceasefire (RFE/RL, 31 May 2020). Afghan officials have stressed that the release of more Taliban prisoners will depend on the continuance of the truce by the insurgent group (Afghanistan Times, 29 May 2020). The recent developments have raised hope that the intra-Afghan peace talks, initially scheduled to start on 10 May under the US-Taliban accord, will finally get underway.

In Kazakhstan, during the past two weeks, paramedics, civil activists, women, and labor groups continued to protest as the country eases coronavirus restrictions, despite a possible second wave of infections (Tengrinews, 27 May 2020). Moreover, between 20 and 25 May, several protests took place in Nur-Sultan, Ust-Kamenogorsk, and Almaty against the court decision to declare the political movement Koshe Party (Party of the Streets) an extremist organization (Tengrinews, 19 May 2020). The movement is derived from another political party, Democratic Choice of Kazakhstan, which was also labeled as extremist and banned in 2018, although its members continue to voice their criticism towards the government (Sputnik News, 19 May 2020, RFE/RL, 19 November 2019). In another development, the Kazakh government introduced new legislation regulating attendance and permissions on public events, as promised by the ruling Nur-Otan party months ago (ACLED, 10 January 2020). However, the legislation was slammed by local and international activists as the organizers were required to notify authorities about the place and time of the gatherings (Eurasianet, 26 May 2020). It seems that these long-awaited changes will be unlikely to improve the situation, and the decision on the Koshe Party proves that oppression persists at the juridical level as well.

A draft bill in Kyrgyzstan also drew criticism, as it obliged civil society organizations to disclose funding sources and the personal information of their employees to authorities (Kaktus Media, 22 May 2020). A group of NGO workers held a protest in Bishkek against the bill while a number of foreign officials and diplomats reacted as well, including the UN representative in Kyrgyzstan who urged Kyrgyz lawmakers to reconsider (Eurasianet, 22 May 2020). Meanwhile, protests related to the coronavirus crisis took place in different regions of the country as people kept in hospitals and quarantine facilities demanded permission from the authorities for self-quarantine. On one occasion, a group of people rioted in a facility near Manas airport, Bishkek, and attempted to turn an ambulance over, as they were agitated by rumors of some possibly infected patients being sent home. On the next day, the Kyrgyz authorities allowed the majority of patients to observe home quarantine (24.kg, 19 May 2020).

Border incidents between Tajikistan and Kyrgyzstan also continued in Ak-Sai and Chorku villages, located in the Batken region of Kyrgyzstan and Vorukh exclave of Tajikistan, respectively: a large non-demarcated area. On 24 and 27 May, two Tajik citizens were injured by gunfire from the Kyrgyz side, as both communities claim rights to land, increasing existing tensions in the region (Asia Plus, 27 May 2020).

In a separate development, a rare protest took place in the Sughd region of Tajikistan, as Chinese employees of a zinc mine in Zornisor clashed with police while demanding unpaid salaries, resulting in dozens of injured demonstrators (RFE/RL, 24 May 2020). The workers also wanted to return to China due to concerns over the spread of coronavirus in Tajikistan, which authorities only acknowledged weeks after the pandemic took hold in the region (Eurasianet, 14 May 2020). Large-scale energy and mining projects, especially Chinese investments, continue in the region despite the pandemic, stranding foreign workers inside the country as the borders remain closed (Eurasianet, 4 May 2020).