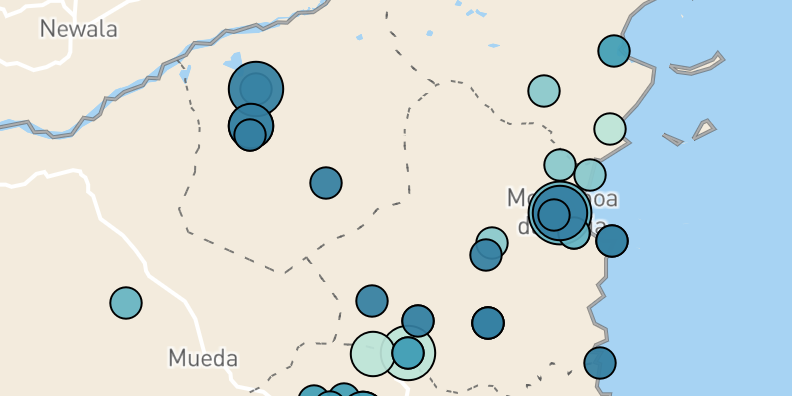 Cabo Delgado remained on edge last week, with insurgents downshifting from their large-scale attack on Macomia district two weeks ago to smaller, more scattered attacks. In all, Cabo Ligado received reports of four insurgent attacks, in which at least six people were killed, all civilians.

The first reported attack last week took place at Imbada, Meluco district, on 3 June. Insurgents entered the village at night and beheaded three civilians and looted some supplies without firing a shot, according to a man whose brother-in-law was among the victims. On the same day, insurgents fired at a group of refugees who were attempting to return to Macomia. The incident took place near the ADPP junction, in Quissanga district, and it is not clear if there were any casualties, but a beheaded body was found just south of ADPP on the same day, which may have been a victim of that attack.

On 5 June, insurgents killed two fishermen on a beach near Ulo, Mocimboa da Praia district, as they tried to reach their fishing boat that had been stranded by a low tide. On the same day, insurgents kidnapped girls in the Nabubussi neighborhood of Mocimboa da Praia as they drew water from a local well. In the past, attacks like these in the center of the province have sometimes been followed by attacks in Nangade, in an apparent effort to further spread out government forces.

New information also emerged about the 28 May attacks on Macomia district as some civilians gradually returned to the scene of the fighting. The civilian death toll in Macomia town now stands at 19, and civilians returning to Chai and Litamanda report finding six and five bodies of civilians in those villages, respectively (Zitamar News, 5 June 2020). During the Macomia attack, insurgents told locals that they were only interested in fighting state forces, but they also killed civilians who they caught drunk. Insurgents occupied Chai for four days, and returning civilians say that almost all buildings in the village have been burned down, with the exception of the local Catholic church. The town is now mostly abandoned.

The Islamic State claimed the Macomia attack in its weekly Al-Naba newsletter on 4 June. That represents a curious departure from past attacks on district capitals that have been heralded by official IS news agencies Amaq and Nashir. Al-Naba, according to the International Crisis Group, “seems intended to update even far-flung provinces about the group’s global campaign of violence and to broadcast a common programmatic line to ISIS affiliates that are otherwise dispersed and isolated,” which is to say that it is a less prestigious publication within the group than Amaq and Nashir (International Crisis Group, 31 March 2020). It is only one data point, but the relegation of the Macomia claim to Al-Naba is the first departure we have seen from the trend of ever-closer collaboration between Cabo Delgado insurgents and IS propagandists.

News from the aftermath of the Macomia attack underlined the struggle the Mozambican government and international humanitarian groups face in trying to provide basic services to Cabo Delgado civilians. The fragility of the government’s hold on areas it ostensibly controls makes it difficult for civilians and aid workers alike to remain in the conflict zone. For example, despite the government’s triumphal claims to have won the battle at Macomia, Médecins Sans Frontières (MSF) announced on 5 June that it is withdrawing from the town as a result of the attack (Zitamar News, 5 June 2020). MSF maintained 27 staff supporting the local health center. The organization did the same thing with its operation in Mocimboa da Praia after the insurgent occupation there in March, and both cases serve as votes of no confidence in the government’s ability to protect aid workers.

Even before the Macomia attack, the UN estimated that over 210,000 people in Cabo Delgado (just under 10% of the province’s population) were internally displaced, with displacement heavily concentrated in the coastal districts hardest hit by the conflict (UNOCHA, 4 June 2020). 30,000 displaced people had been living in Macomia town, and the attack there triggered another scattering of civilians fleeing the fighting, with many moving to the province’s southern districts that have so far remained outside the conflict zone. The government and international community are only beginning to get a handle on the displacement problem. Most refugees are being housed in private homes, and a UN survey found that three-quarters of them have received no humanitarian assistance at all.

Displacement is already becoming a resource strain — the UN requested $35.5 million in foreign aid for humanitarian support in Cabo Delgado for the second half of 2020, most of it earmarked for supporting refugees — and is likely to worsen. The humanitarian community already rates food security in the coastal districts that have seen the lion’s share of the fighting either “stressed” or “in crisis,” and a report emerged this week that the conflict has kept 5,000 fishermen from working (Opais, 7 June 2020). Their reluctance to go to sea is understandable given the evidence from Ulo last week, but will increase food insecurity which in turn will likely drive further displacement.

There are some small silver linings, however. The same report about the fishermen noted that the government has installed significant aquaculture infrastructure in the province. Furthermore, the power facility in Macomia that insurgents knocked out of commission has been repaired, meaning that Mueda, Nangade, Palma, and Mocímboa da Praia districts once again have electricity.

Researcher Sergio Chichava reported that Mozambican security forces suffered friendly fire casualties from Dyck Advisory Group (DAG) helicopters during the battle for Macomia, due to DAG gunners being unable to distinguish between soldiers and insurgents wearing the same uniforms (Club of Mozambique, 5 June 2020). Those casualties and the children injured by DAG gunfire suggest major deficiencies in coordination between air and ground units working for the government. As long as DAG gunships continue to form the tip of the government’s spear, they are likely to continue producing government and civilian casualties.

Chichava also urged the government to “close” Cabo Delgado, a call taken up by journalist Luis Nhachote, who argued that shutting down the province’s borders is necessary to prevent insurgents entering the conflict zone (DW, 1 June 2020). Whatever the analytical merits of Nhachote’s claim that the conflict is “exported” from abroad (which seemed to echo Mozambican president Filipe Nyusi’s comment last week that the violence serves the interests of “internal and external elites”), the idea of closing the border is a pipe dream. The Mozambique-Tanzania border is massive, and many people live their lives on both sides of it.

Another kind of outside security assistance has arrived in Cabo Delgado, however. Africa Intelligence reports that French energy giant Total brought on former French foreign legion officer Frédéric Marbot last year to manage security for its gas project in Palma district (Africa Intelligence, 1 June 2020). The article claims that Marbot has “set up a civilian commando unit” to guard the company’s assets, but the more likely interpretation is that he is coordinating security plans with Mozambican troops deployed to protect the Total camp. Marbot, who reportedly also ran security at Total facilities in Nigeria and Kazakhstan, will be joined in Cabo Delgado by his former foreign legion colleague Charles Stroeng. 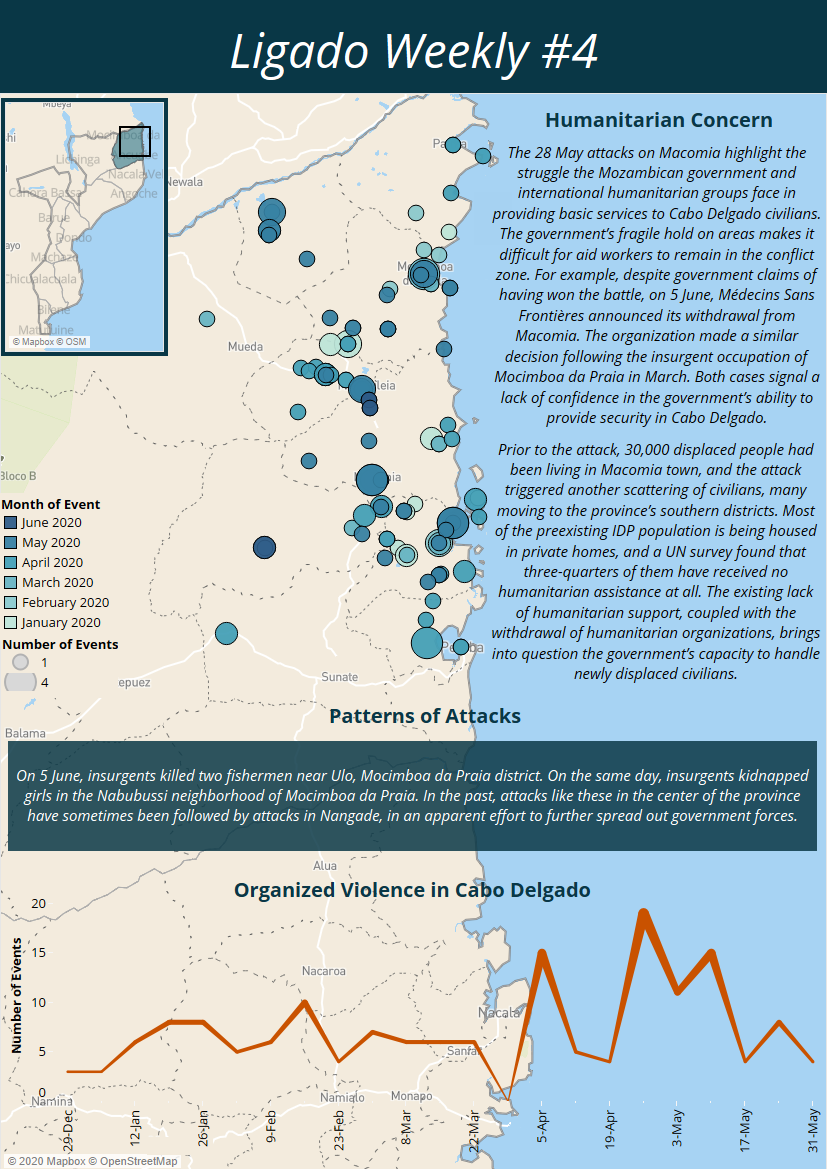