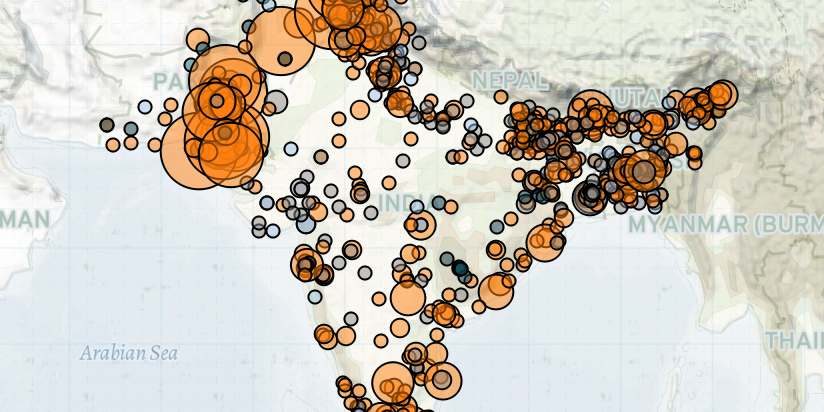 Key trends in South Asia last week include: armed clashes between security forces and domestic rebel groups in India and Pakistan, as well as coronavirus-related violence in India and Nepal.

In India, armed clashes between security forces and rebel groups continued across the country. In Jammu and Kashmir (J&K), 19 militant fatalities were reported in armed clashes between security forces and rebel groups. Thirteen militants were killed along the Line of Control (LoC) in Poonch and Rajouri districts during counter-infiltration operations by security forces. Five Jaish-e-Mohammad (JeM) militants, including a commander, were killed in encounters in Pulwama district (Hindustan Times, 3 June 2020). Since the onset of the coronavirus lockdown, security forces have reportedly increased operations against militant groups, killing several high-profile militants including the chief of Hizb-ul-Mujahideen (HM) in J&K (India Today, 2 June 2020). In Chhattisgarh and Jharkhand states, armed clashes were reported between Naxal-Maoist rebels and security personnel. A Naxal-Maoist commander was killed in Chhattisgarh while two security personnel were killed in Jharkhand. In Pakistan, security forces killed three suspected Tehreek-i-Taliban Pakistan (TTP) militants during an operation in Khyber Pakhtunkhwa province.

Last week, frontline health workers battling coronavirus continued to be targeted with violence in Nepal and India. In Nepal, patients at a coronavirus facility assaulted and severely injured an on-duty health worker when they were asked to undergo additional coronavirus diagnostic testing prior to being released from quarantine. At another quarantine facility in Dailekh district, patients assaulted the Chief Administrative Officer of the local municipality over poor management of the facility. In India’s J&K, a doctor tasked with tracing and detecting coronavirus positive cases was attacked and injured by security forces despite possessing the necessary documentation to work.

In India and Nepal, violence stemming from fears of coronavirus transmission were also reported last week. In Nepal, a mob pelted stones and chased away non-locals, fearing the spread of coronavirus in their area. In India’s Kerala state, a fish vending stall belonging to a person who had recently encountered a coronavirus positive patient was attacked by locals fearing the risk of widespread transmission. In J&K, locals attacked a family with sticks, objecting to the cremation of a patient who died due to coronavirus.

In other developments, an increase in vigilante violence was reported in India last week. In several states including Assam, Gujarat, Odisha and Madhya Pradesh, people were attacked and killed by mobs over allegations of theft. In Assam, one person was killed when a large number of locals attacked four Bangladeshi citizens accused of cattle theft. Similarly, a man accused of stealing a goat was killed by a mob in Odisha. Historically, members of minority communities accused of cattle trading and theft have often become the targets of vigilante violence in India (Human Rights Watch, 18 February 2019).