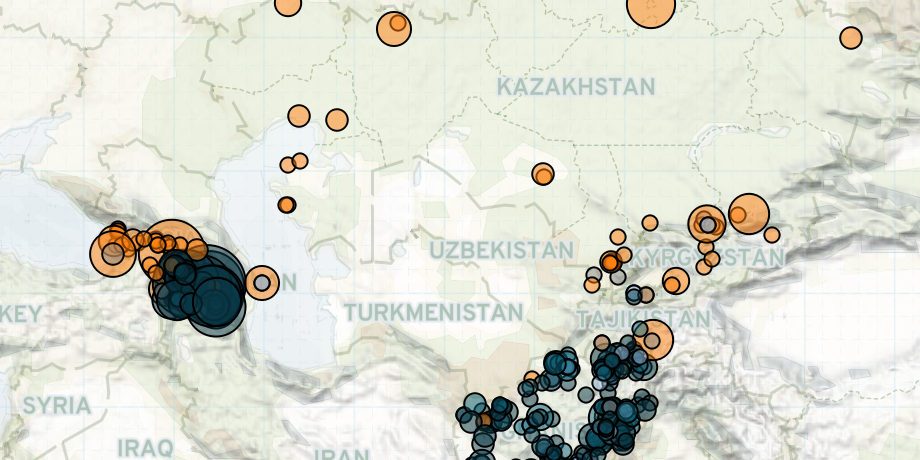 Last week in Central Asia and the Caucasus, considerable progress was made in intra-Afghan peace talks, despite ongoing clashes between the Taliban and government forces. In Kazakhstan, women protested against insufficient financial assistance while ongoing political oppression sparked further demonstrations. Another weekend coronavirus curfew prompted unrest in Azerbaijan, and ceasefire violations on the Armenia-Azerbaijan-Artsakh Lines of Contact continued at similar levels.

In Afghanistan, Taliban and Afghan forces continued to clash across the country. The deadliest clashes took place in Kandahar and Ghazni, where Afghan forces repulsed Taliban attacks, killing dozens. Meanwhile, the Taliban released 76 Afghan soldiers in Ghazni and Maidan Wardak provinces (Pajhwok Afghan News, 11 June 2020). Afghan President Ashraf Ghani also announced plans to release 2,000 more Taliban prisoners and reiterated that the three-day ceasefire during Eid al-Fitr was a key step forward in the peace process (Ariana News, 11 June 2020). Moreover, both parties agreed on opening the intra-Afghan talks that have been stalled for months due to intense Taliban attacks on Afghan forces (Reuters, 14 June 2020). Although Ghani underlined that the Taliban continues to launch deadly attacks, the Taliban noted in a written statement that the peace process has entered a phase of “smooth implementation” (Voice of Jihad, 13 June 2020). The statement also criticized a recent UN report that posited a connection between Al Qaeda and the Taliban, warning that these claims could disrupt the process.

Separately, ACLED records two unclaimed attacks last week targeting religious figures in Afghanistan: an imam was shot in Chah Ab district of Takhar province, and another was killed when bombs exploded inside a Kabul mosque, along with three other people. The Taliban raised suspicion that Afghan intelligence forces may have been involved in such attacks and accused them of attempting to sabotage the peace process (Voice of Jihad, 12 June 2020). However, the bombing was similar to another mosque attack on 2 June that was claimed by the Islamic State, suggesting that they may in fact be the perpetrator. While the perpetrators of these attacks remain officially unknown, President Ghani ordered increased security around the mosques to ensure the safety of religious leaders (Khaama Press, 15 June 2020).

In Kazakhstan, women demonstrated in Almaty, Lenger, Abai, and Nur Sultan to demand subsidized housing, daycare facilities, and financial assistance for their children. Such protests have been taking place periodically in Kazakhstan despite the coronavirus crisis, but the number of gatherings increased over the past week. The protests in Nur Sultan city took place outside the Ministry of Labor and Social Protection from 8 to 10 June, until police dispersed the group by detaining some of the women. Separately, many activists, including supporters of the recently banned ‘Party of the Street’ (Koshe Partiasy) and the civil rights group Oyan Kazakhstan, organized demonstrations in Nur Sultan and Almaty. The protesters condemned the detention of political prisoners like Asiya Tulesova, who was detained during anti-government protests the previous week, and Alnur Iliashev, who was arrested in April 2020 after the ruling Nur-Otan party filed a complaint accusing him of defamation. Both activists face multiple years in prison (Eurasianet, 11 June 2020).

Amid rising coronavirus cases, Azerbaijan continues to maintain weekend curfews, triggering unrest over the perception that the restrictions are not improving the situation (JAM News, 15 June 2020). In Baku, people threw trash and other objects at the police after they detained some residents for violating quarantine rules. Relatives and lawyers of detainees later claimed that authorities had beaten them at the police station.

Meanwhile, ceasefire violations between Armenia and Azerbaijan continued at similar levels to the week prior according to Azerbaijan’s Ministry of Defense (MoD), which reported 11 armed engagements on the Armenia-Azerbaijan Line of Contact (LoC) and 31 armed engagements on the Artsakh-Azerbaijan LoC. The Artsakh MoD also reported findings consistent with the previous week’s report, with 900 shots from Azerbaijani forces into Armenian positions and 95 ceasefire violations on the Artsakh-Azerbaijan LoC (Artsakh Republic Ministry of Defence, 13 June 2020). Additionally, the Ministry of Foreign Affairs of Armenia documented around 199 armed conflict events initiated by Azerbaijani forces targeting Armenian and Artsakh positions during the month of May 2020, marking no change from its April 2020 report.