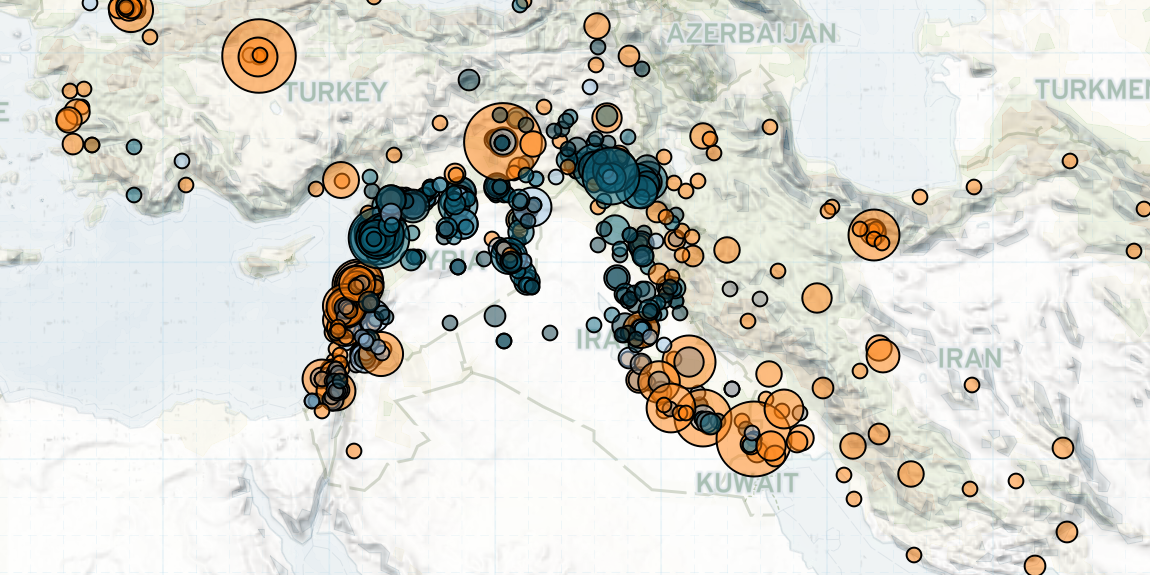 Last week in the Middle East, demonstrations and remote violence increased throughout the region. The surge in protests was propelled by Lebanon, Syria, and Yemen, while riots spiked in Iraq. Meanwhile, the rise in remote violence was driven by a rapid increase in airstrikes in Syria as Russian forces resumed their air campaign in the Greater Idleb area following a three-month pause.

In Lebanon, demonstrations continued throughout the week. The majority were peaceful, with riots slightly decreasing in comparison to the previous week. Protests intensified over the weekend following a depreciation of the Lebanese Lira historic lows, reportedly plunging the country into its worst economic crisis in decades (BBC, 12 June 2020). The main hubs of demonstration activity were Beirut and Tripoli cities, where demonstrators blocked roads using burning tires and threw Molotov cocktails at banks and security forces. Clashes were also reported in Beirut between supporters of the majority-Sunni Future Movement and the Hezbollah-aligned Amal Movement, as well as between locals and supporters of Amal and Hezbollah (Al Monitor, 12 June 2020). These clashes primarily broke out due to the controversial demand to disarm Hezbollah emanating from some sectors of the popular demonstration movement, as the economic situation additionally pushes the country further to the brink.

Last week in Israel, demonstrations flared in Jaffa and continued almost daily after the Tel Aviv municipality allowed the demolition of an 18th-century Muslim burial ground to make way for a new residential complex. At the same time, thousands of Palestinians protested in the West Bank in Palestine, and thousands of Israelis protested in Tel Aviv against Israel’s planned annexation of the Jordan valley, set to take place in July (DW, 6 June 2020).

Anti-regime protests in southern Syria continued over the past week, mainly in As Sweida city, exacerbating the instability in regime-controlled areas. Meanwhile, the Islamic State (IS) increased the scope of its attacks against regime forces and significantly expanded its reach. For over a year, IS attacks have been concentrated in central Syria and in the east, near the border with Iraq, primarily in the Homs desert. Last week, however, IS attacked two villages in eastern Hama in west-central Syria, indicating an expanded area of operations. In response, Syrian and Russian airstrikes were reported to drive back the IS attack. Russian airstrikes also resumed in the Greater Idleb area following a months-long pause starting on 5 March, after a ceasefire agreement between Russia and Turkey in Idleb province. In the wake of continued regime reinforcement along the borders of rebel-held areas, Islamist factions historically opposed to the Astana process formed a new operation room dubbed “So Be Steadfast,” rejecting the 5 March ceasefire. The movement of regime forces, increased Russian airstrikes, and the formation of the operation room potentially signal a re-escalation of hostilities in the coming weeks and the collapse of the ceasefire agreement.

Demonstrations intensified in Iraq as the October 2019 protest movement once again took to the streets to call for the dismissal of local government officials and justice for demonstrators that have been killed. Several clashes and riots were reported. Separate from the October movement, protesters are increasingly rallying against the economic fallout from the coronavirus pandemic, calling for jobs, months-delayed salaries, and better services. These demonstrations may decline amid the daily rise in coronavirus infections and fatalities in Iraq, but they will likely resurge if Prime Minister Mustafa Al Kazimi does not respond to their demands.

In addition, Al Kazimi is engaged in a strategic dialogue with the US that was initiated on 11 June to lay out a plan for American troops to exit Iraq. The plan requires that Iraq commit to protecting bases hosting foreign forces. This dialogue is taking place amidst a resumption of shelling attacks by unidentified perpetrators on strategic positions such as Baghdad’s International Airport complex, the Green Zone, and Taji military base (Kurdistan 24, 14 June 2020). Iranian-backed militias are suspected to be behind the attacks, underscoring the continued threat posed by the groups despite efforts to contain their operations.

In Yemen, fighting between Houthi and joint anti-Houthi forces increased after a slight lull the week prior. Clashes occurred on fronts in northwestern Ad Dali governorate and in Al Hodeidah governorate, although no territory was exchanged in either region. Along the Marib-Sanaa border, Houthi forces reportedly gained territory in clashes in Medghal, while anti-Houthi forces advanced around Sirwah district, including an 11-kilometer advance on the Nihm front (Al Mashhad Al Yemeni, 7 June 2020).

The conflict in Abyan between pro-Hadi and pro-Southern Transitional Council (STC) forces increased significantly throughout the past week, highlighted by fighting on 11 June, in which over 100 soldiers were reportedly killed and injured (4 May, 11 June 2020). Fighting has been especially intense to the north of Zinjibar city, where pro-Hadi and pro-STC forces swapped territory near Jaar city. Additionally, fighting between the two groups extended to Shabwah governorate, as pro-STC forces reportedly took over the administration of Nisab district after clashing with pro-Hadi and pro-Islah forces (Hadramawt 21, 13 June 2020). Although fighting has halted in the Socotra archipelago, local STC leaders organized a series of demonstrations throughout the main island while Hadi supporters protested in the capital city, Hidaybu.

In Saudi Arabia, air defense forces intercepted a Houthi missile over Najran city, causing light injuries to some civilians as shrapnel fell over populated areas (Al Jazeera, 13 June 2020). The interception came as the Saudi-led coalition continued to launch significant airstrikes in Houthi-controlled territories in Yemen. Houthi forces have increased missile strikes deep within Saudi territory, with the 13 June interception marking the fourth missile intercepted inside the country since 26 May 2020.