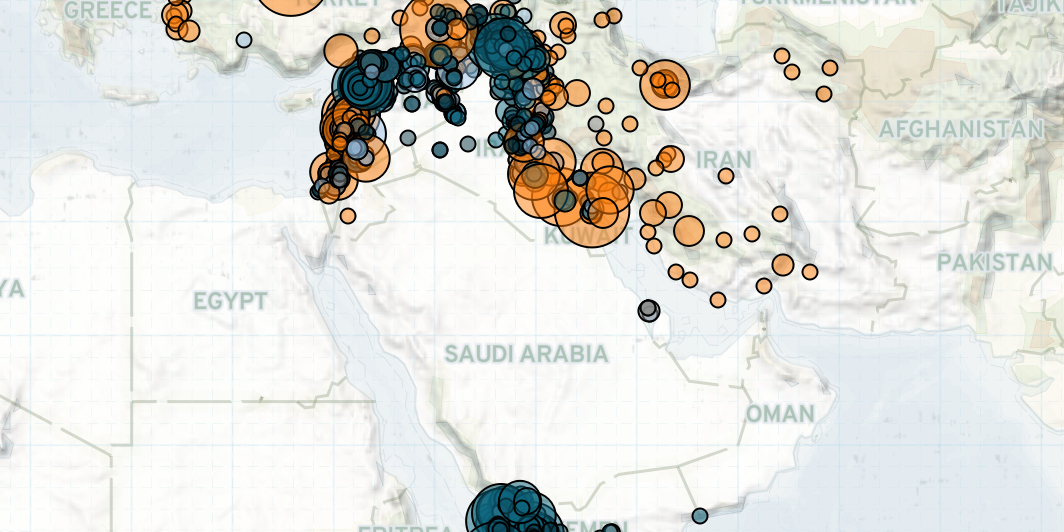 Last week in the Middle East, the number of political violence and demonstration events remained stable or decreased in most countries, with the exceptions of Yemen and Iraq. In Yemen, battles and explosions/remote violence events increased. In Iraq, the Turkish military launched Operation Claw-Eagle against the Kurdistan Workers’ Party (PKK), leading to a major spike in air and drone strikes. In Lebanon, demonstrations dropped off significantly after the previous week’s increase following the collapse of the Lebanese pound.

In Yemen, Houthi forces clashed with joint anti-Houthi forces for the second straight week as the conflict returned to pre-pandemic frequency. Houthi forces overtook a mountain on the Qaniyah front in Al Bayda governorate. They also reasserted control in the Radman Al Awad district of the same governorate after a brief tribal insurgency led by the Al Awad tribal militia. Joint anti-Houthi forces, conversely, took territory to the east of Sanaa, along the Nihm front at the border area of Al Jawf, Marib, and Sanaa governorates. Fighting continued in Al Hodeidah and Ad Dali governorates, although frontlines remained static.

Fighting between pro-Hadi and pro-Southern Transitional Council (STC) forces in the south of Yemen continued in Abyan governorate, with some territory exchanged to the north and east of Zinjibar city, although drastic changes to the fronts were not reported. Pro-STC forces took control over the entire island of Socotra on 20 June 2020, resulting in the relocation of the governor, Ramzi Mahrous, to Al Mahrah governorate (Al Masdar, 21 June 2020). Clashes on Socotra broke out just a few days prior, after two weeks of relative peace.

In Saudi Arabia, Houthi forces announced that they attacked an airbase near Khamis Mushait with attack drones, although Saudi forces claimed to have intercepted all drones (Asharq Al Awsat, 15 June 2020). A second attack with ballistic missiles on Najran city was reportedly foiled by Saudi Air Defence forces (Saudi Press Agency, 16 June 2020). The Saudi-led coalition increased the intensity of its aerial campaign in Sanaa and other Houthi-controlled territories during the reporting period (Middle East Eye, 20 June 2020). Notably, an airstrike on 15 June 2020 in Sadah governorate reportedly killed 13 civilians (Associated Press, 15 June 2020).

Last week in Iraq, Turkey launched a major air operation followed by a ground operation against the PKK in Iraqi Kurdistan. The air operation, entitled ‘Operation Claw-Eagle,’ reportedly started overnight on Sunday, 14 June and consisted of a major bombing campaign against 81 suspected PKK targets, including in the Yazidi homeland of Sinjar and the Qandil mountains, a traditional PKK stronghold (The Guardian, 17 June 2020). By Wednesday, 17 June, Operation Claw-Tiger, the ground operation, began with Turkish Special Forces airlifted and deployed overland to the border region of Haftanin. The campaign reportedly targeted 150 suspected PKK positions and was supported by jets, helicopters, drones, and artillery. By Saturday, the Turkish Defense Minister announced that over 700 PKK targets were hit in northern Iraq (Anadolu Agency, 20 June 2020). At least 11 civilians were reportedly killed by the airstrikes. Additionally, at least 20 Turkish soldiers were reportedly killed and dozens wounded in armed clashes with the PKK following a foiled airdrop operation by the Turkish Special Forces in Haftanin (National Iraqi News Agency, 20 June 2020).

The Iranian military also shelled villages outside the Kurdistan Region’s Haji Omaran district in Erbil province for two consecutive days, reportedly targeting PKK, Kurdistan Free Life Party (PJAK), and Democratic Party of Iranian Kurdistan (PDKI) positions. No casualties were reported due to the shelling (Kurdistan 24, 17 June 2020). There were no reports that these events are linked to the Turkish operations.

In response to the Turkish operations, protests erupted across Iraqi Kurdistan. By the end of the week, violent demonstrations broke out in Sheladiz, as demonstrators attempted to march to Turkish observation posts in the area, prompting security forces to use tear gas to disperse the crowds (Rudaw, 20 June 2020).

In Syria, Global Coalition drones reportedly targeted and killed a prominent IS commander in eastern Aleppo. Another Coalition strike, in Idleb, targeted and killed two foreign Hurras al Deen commanders who had recently joined the Fathbatu Operations Room. Meanwhile, Russian forces launched airstrikes on towns and villages in Idleb amid fighting in the area. In southern Syria, anti-regime protests were reported in Dar’a and As-Sweida. Protests in As-Sweida were met with excessive force by regime loyalists and violent pro-regime demonstrators.

In Lebanon, following the dramatic rise in demonstrations on 11 June after the value of the Lebanese pound against the US dollar dropped, very few demonstrations were reported last week. An increasing number of activists have been arrested for comments on social media (Arab News, 20 June 2020). Ongoing negotiations with the International Monetary Fund (IMF) will have major impacts on the future of Lebanon’s economy (Al Jazeera, 20 June 2020).