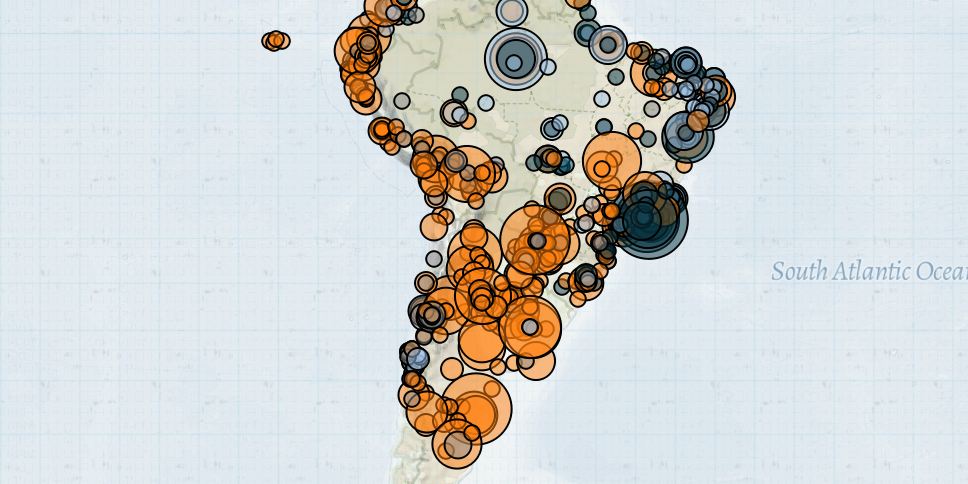 Last week in South America, key developments include: demonstrations over coronavirus-related issues across the region; political killings in Colombia and Paraguay; intensified indigenous militia activities in Chile; as well as continued armed clashes between criminal groups and state forces in Brazil.

As coronavirus infections surpassed two million cases in Latin America, pandemic-related demonstrations were reported around the region. In Bolivia, locals occupied and blocked the K’ara K’ara city dump area in Cochabamba to demand free access to potable water during the pandemic. In Chile, citizens protested for several days in a row in Valparaíso region to demand financial support for vulnerable families. In Colombia, students protested to call for zero tuition fees amidst the pandemic, while farmers and workers demanded the re-opening of business and economic activities. In Ecuador, thousands of workers, students, and health workers took to the streets for the second consecutive week to protest against economic measures approved by the government to address the pandemic. In Venezuela, the number of demonstration events slightly decreased, but citizens continued to demand the distribution of potable water, fuel, and electric power amidst an economic crisis worsened by the pandemic. Labor groups from several sectors also demanded better working conditions and salaries.

Political killings continued in Colombia, largely matching the weekly average of the year, with five fatalities reported. Two indigenous leaders were killed in separate events in the department of Cauca (see ACLED’s CDT Spotlight on attacks against civilians in Cauca), while two former members of the Revolutionary Armed Forces of Colombia (FARC) were killed in Norte de Santander and Putumayo. In Bolívar department, a social leader and teacher was killed by unidentified armed individuals. Moreover, six soldiers were killed by FARC dissidents in an armed clash in Meta department.

In Chile, tensions increased once again in the south after militias carried out a series of attacks targeting civilians. In the Araucania region, a group of 10 suspected indigenous militiamen clashed with police forces following an arson attack against truck drivers. In the past months, the number of attacks perpetrated by indigenous armed groups has significantly increased in Chile. Native groups from the country’s south demand restitution of their land rights in areas controlled by forestry companies.

In Guyana, the deadlock caused by the election recount for the 2 March general elections is nearing its end. Supporters of the ruling Partnership for National Unity + Alliance for Change (ANPU+AFC) protested in at least three locations to show support for the Chief Election Officer of the Guyana Elections Commission (GECOM) Keith Lowenfield. As Lowenfield initially refused to submit an election report based on the recounting of votes, opposition parties accused him of being biased in favor of the ruling coalition.

In Argentina, several protests and motorcades were reported across the country for the second consecutive week against the government’s recent decision to nationalize one of the largest grain exporter companies, the Vicentin. Farmers and agricultural entities claimed the decision will override legal steps provided by current insolvency regulations, sending a negative sign to national and international investors.

In Brazil, labor groups took to the streets to demand financial aid during the pandemic, such as low interest rates and extended deadlines for debt payments. Business owners also protested against social distancing measures, demanding the re-opening of business and showing support for the president. Meanwhile, on 18 June, a former political advisor connected to the Bolsonaro family was arrested by the Federal Police. Fabrício Queiroz’s arrest was part of an ongoing investigation of corruption schemes in the Legislative Assembly of Rio de Janeiro state. He is also the main suspected link between the presidential family and organized police militias (G1, 19 June 2020). Following the episode, several pot-banging protests against the president were reported in the country’s main cities.

The number of clashes between armed groups and state forces remained steady in Brazil. In Rio de Janeiro city, despite the Supreme Court prohibition of police operations during the pandemic, armed clashes between police forces and criminal groups were still reported, mostly during patrol activities. In São Paulo city, the abduction and killing of a 15-year-old boy led to two days of demonstrations by residents of Jabaquara neighborhood. Several buses were set on fire and violence spilled over to the neighboring city of Diadema. It is suspected that the crime was perpetrated by Military Police officers, and one suspect was arrested.

The number of attacks on civilians perpetrated by drug trafficking groups and police militias decreased compared to the previous week, with a total of 21 reported events across the country.