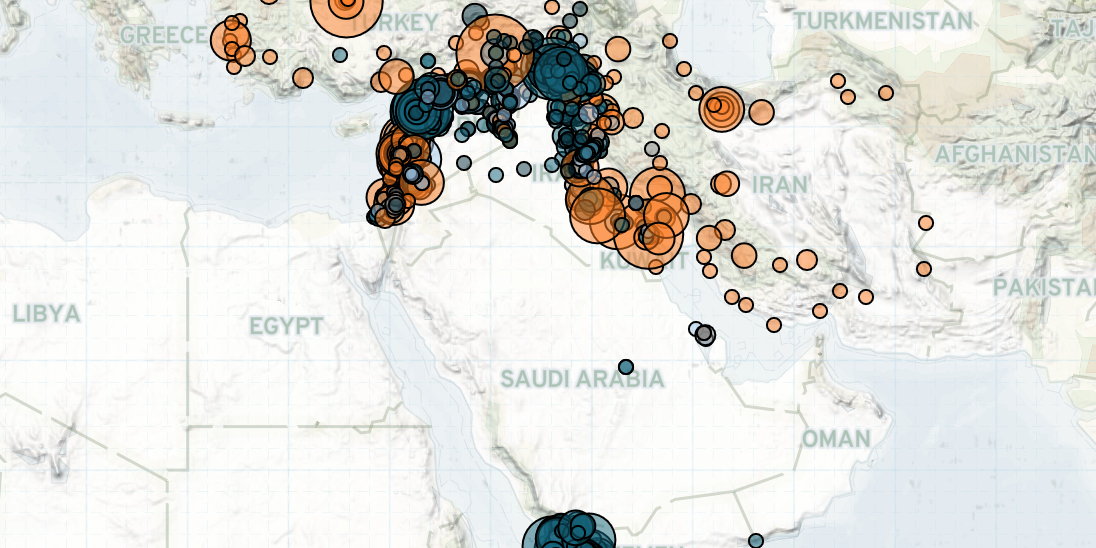 In Syria, clashes erupted between Hayat Tahrir Al Sham (HTS) and the newly formed Fathbatou Operations Room after HTS forces arrested a prominent Fathbatou leader. The clashes concentrated in and around Idleb city along with Yakoubia and Arshani. The fighting came only a few days after a coalition drone strike that targeted two foreign commanders of Fathbatou in Idleb city. In the Greater Idleb area, regime and Turkish forces exchanged shelling barrages in several areas in the northwest, where the Turkish forces shelled four Syrian regime positions. Tensions remained high in Dar’a province, where several riots and protests took place following the arrest of a former opposition leader in Jasim in addition to a larger arrest campaign against civilians in Da’el, Sheikh Miskine, and Dar’a city. Later in the week, clashes erupted again between members of the Russian-backed 5th Assault Corps and  regime forces amidst several attacks by unidentified gunmen against regime elements in the province.

In Iraq, on 22 June, Prime Minister (PM) Mustafa Al Kazimi, in collaboration with the Joint Operations Command of the global coalition, launched operation ‘Heroes of Iraq III’ to pursue Islamic State (IS) militants in Saladin province and to clear areas along the borders with Diyala, Samarra, and Kirkuk provinces (Inherent Resolve, 27 June 2020). The first week of the newly launched operation reportedly killed 24 IS militants in Saladin province, and 12 on Mount Qarachogh in Makhmur (a disputed territory between Ninewa and Erbil provinces). The operation also resulted in the destruction of at least a dozen IS hideouts, logistical materials, and weapons sites.

At the same time, Turkish operations against the Kurdistan Workers’ Party (PKK) in northern Iraq continued for the second week, mainly targeting the Zakho and Amadiya districts in Dahuk province. For more information on the conflict between Turkey and the PKK, see this recent ACLED infographic. A Turkish drone strike that targeted the Kuna Masi resort in Sulaymaniyah province reportedly targeted members of the Kurdistan Free Life Party (PJAK), and left one of their fighters dead and six civilians injured (Rudaw, 26 June 2020). Iranian forces also engaged in an armed clash with Peshmerga forces at Halgurd Mountain in Erbil province. The attacks by both Turkey and Iran (which do not appear to be related) continue to pose a threat to the residents of Iraqi Kurdistan, who repeatedly came out to protest against the incursions during the week.

In Baghdad, Iraqi Counter Terrorism Service (CTS) forces stormed the Popular Mobilization Forces (PMF)-affiliated Kataib Hezbollah (KH) headquarters and arrested at least 13 members, including three officials. The raid was reportedly launched due to KH’s suspected involvement in repeated attacks on US bases and other facilities (Rudaw, 26 June 2020). This was a bold move by the Iraqi PM as the raid prompted scathing remarks from the heads of several prominent PMF brigades. There were also reports of the use of a new intimidation tactic of unidentified armed men (believed to be PMF fighters) driving towards government buildings and a CTS headquarters demanding the release of the prisoners (Reuters, 26 June 2020). The aftermath of the raid represents a small fraction of the obstacles that lie ahead for PM Al Kazimi in regards to managing the PMF.

Separately, the Saudi-led coalition announced a truce between pro-Southern Transitional Council (STC) and pro-Hadi forces in Abyan on 22 June  (Al Jazeera, 22 June 2020). Fighting between the groups continued, however, albeit at a lesser degree and with less intensity than weeks prior (Middle East Monitor, 27 June 2020). The continued conflict prompted President Abdrabbuh Mansur Hadi to make a rare speech imploring the STC to accept the ceasefire and work to implement the Riyadh Agreement (Saudi Gazette, 27 June 2020). Conversely, pro-STC media blamed pro-Hadi forces for the continued fighting in Abyan. Meanwhile, pro-STC demonstrations calling for the imposition of self-administration took place in Al Mahrah, Hadramawt, and Shabwah governorates. The STC announced self-administration of areas under its control on 26 April 2020.