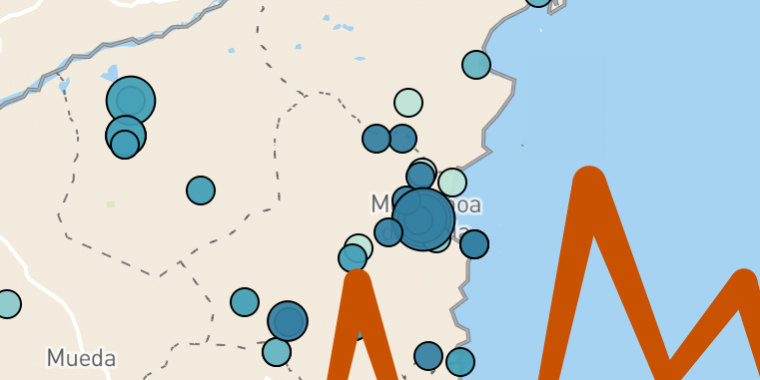 Last week was a particularly murky one in the Cabo Delgado conflict. Skirmishes following the 27 June attack on Mocimboa da Praia continued through 3 July, creating sustained fear among civilians and causing many to flee northward toward Palma. A source referred to Mocimboa da Praia as a “ghost town” by 6 July. As most civilians left, security forces and others who stayed behind took to looting and vandalism in many parts of Mocimboa da Praia. Among those who left Mocimboa da Praia, an indeterminate number were killed — a source reported seeing several bodies, likely civilians fleeing the fighting, on the northbound road from Mocimboa da Praia — and three civilians in Chimbanga, in Mocimboa da Praia district on the road to Palma, were beheaded. Overall casualty reports among both civilians and combatants were unclear, however.

Also unclear are the details of a 1 July government attack on an insurgent base near Ntessa, Macomia district. Initial reports, which appeared near-simultaneously on the pro-government website Noticias de Defesa and on pro-government Portuguese commentator Nuno Rogeiro’s Facebook page, claimed a rout of a massive insurgent base, with 100 insurgents and 12-15 Mozambican soldiers killed in the fighting (Zitamar News, 2 July 2020). There has been no evidence (or even official government claims) put forward to support those numbers. A subsequent report, ostensibly from an anonymous member of the Mozambican security services, said that government forces attacked the base with helicopters, mortars, and ground troops, but failed to take it after multiple attempts (Bifes De Pemba- Página Oficial, 2 July 2020). Two women did escape the base during the attack, and confirmed that helicopters and ground troops were both hitting the base, but could offer no information about the outcome of the battle. No credible casualty counts have yet emerged.

There is clarity, however, about three smaller incidents from the past week. On 29 June, insurgents beheaded a man in Nivico, Quissanga district. On 3 July, insurgents burned homes in coastal Milamba, Macomia district. No deaths were reported in that attack. The next day, 4 July, insurgents killed three civilians in Simbolongo, also on the coast in Macomia district. In all, seven civilians are confirmed dead from the fighting in the past week, although the true number of dead on all sides is likely far higher.

Details have also come out about earlier attacks. During the fighting for Mocimboa da Praia on 27 June, alleged insurgents attacked a vehicle carrying 14 passengers for the construction company Fenix (Zitamar News, 6 July 2020). The attackers opened fire on the vehicle, killing at least eight. Three of the passengers have been accounted for alive, and another three remain missing. Also reportedly missing since 3 July is a security manager for Gaboon Protection.

Also, a new report emerged of insurgents shooting 17 people to death in Ilala, Macomia district, back on 3 June (Carta de Mocambique, 7 July 2020). That such a high casualty event could remain hidden for over a month reflects the exceptionally tight information environment in Cabo Delgado at the moment.

The Islamic State seemed to signal a shift in its approach to the conflict in Cabo Delgado last week. In an article in its official Al Naba publication that went into unprecedented depth about how IS views the Cabo Delgado insurgency, the group moved to internationalize its discourse about the conflict (Aymenn Jawad Al-Tamimi, 3 July 2020).

The article explicitly threatens both foreign natural gas investments inside Mozambique and countries that attempt to aid the Mozambican government in its counterinsurgency effort. Cabo Delgado’s natural gas projects are presented as hostages, deterring governments interested in the projects from supporting the Mozambican government, lest the projects come under attack. The statement rightly claims that IS has the capability to attack natural gas infrastructure in Cabo Delgado, saying that energy companies and their home governments are “delusional” to think that Mozambican security forces can protect the projects. Given the past performance of Mozambican troops on the Afungi peninsula and the weaponry, including mortars, that insurgents have captured in the conflict, the threat of successful attacks on gas projects is credible, although the true damage insurgents could do remains to be seen. That said, French energy giant Total said last week that it is confident in the “safe execution” of its gas project in Cabo Delgado (Visao, 3 July 2020).

IS also takes particular aim at South Africa in the article, threatening to “open a fighting front inside [South Africa’s] borders” in the event of direct South African military intervention in Cabo Delgado.

The article’s international rhetoric is in contrast to the narratives the insurgency presents to local civilians in Cabo Delgado, which tend to focus on criticizing the Mozambican government, especially about human rights abuses committed since the start of the conflict, and implementing their version of Islamic law. Yet the piece also makes an attempt to bridge the gap between the domestic and international discourses, speaking to local grievances by arguing that the Mozambican government is like Western governments in that it only cares about exploiting Mozambique’s natural resource wealth. Whatever its effect as propaganda, the article demonstrates an awareness of Mozambican politics on the part of IS central. If actual attacks take place following through on the Islamic State’s threats, that, along with this propaganda evolution, will be a strong indication that IS has taken a much stronger strategic hold over the insurgency than it had before.

It may not be long until the power of the IS threat toward other countries in the region is tested. On 26 June, the Southern African Development Community (SADC) made progress toward an agreement on an assistance package for Mozambique to address the Cabo Delgado conflict that would include provisions for military deployments from some member countries. Details are sparse, but the agreement would be tangible progress toward greater regional involvement in the conflict. The deployments themselves, however, may be mere window dressing, as one SADC expert pointed out. SADC has no in-house capacity or budget to organize military interventions, and the Mozambican government itself has been reluctant to allow troops under foreign control into the conflict zone and has been dragging its feet.

Bilateral discussions about Cabo Delgado continue in the region, with Mozambican President Filipe Nyusi speaking with his Tanzanian counterpart, John Magufuli, by phone on 1 July about a range of topics, including counterterrorism.

Potential military intervention in Cabo Delgado continues to be a political issue in Portugal, where defense minister João Gomes Cravinho decidedly soft-pedaled the prospect in a parliamentary hearing on 1 July (Club of Mozambique, 30 June 2020). Cravinho said that his government is open to the possibility of providing military aid to Mozambique, but that any such aid would have to come after an explicit request from the Mozambican government. Members of the opposition Social Democratic Party, including Member of the European Parliament Paulo Rangel, have taken a much more activist stance, urging the European Union to make an “urgent intervention” in Cabo Delgado (Sapo Noticias, 6 July 2020). In reality, however, the debate is likely academic — the idea that Portuguese troops would occupy, for example, Chai, the village in Macomia district in which Frelimo’s war of independence against Portugal famously began, is almost certainly a non-starter for the Mozambican government.

In Cabo Delgado itself, Mozambique’s health ministry will undertake a seroepidemiological survey of COVID-19 in Pemba city, to better understand how widely the virus has spread (Club of Mozambique, 6 July 2020). A similar study in Nampula, the results of which were released last week, showed that 5% of people had been infected, including 21% of merchants in the city’s central market (Government of Mozambique, 1 July 2020). With Pemba’s burgeoning population of people displaced by the conflict, the study will be an important benchmark in understanding how COVID-19 will shape the humanitarian situation in Cabo Delgado.

Finally, journalist Ibraimo Mbaruco remains missing, after having apparently been abducted by Mozambican security forces in Palma in April. Mbaruco’s family complained publicly last week that authorities have been uncommunicative with them and have failed to follow up on leads in their investigation into his whereabouts (VOA, 1 July 2020). Reporters Without Borders also called for an international investigation into the case (Plataforma, 4 July 2020). The most recent information available suggested that Mbaruco was in military custody at the Mueda barracks.

On 30 June 2020, Islamist militants attacked Quelimane, Palma, as they were withdrawing from Mocimboa da Praia. No fatalities were reported.

Around 1 July 2020, three dead bodies were found in Tororo, Quissanga. Islamist militants were the suspected attackers.

ACLED is the highest quality and most widely used real-time data and analysis source on political violence and demonstrations around the world. Practitioners, researchers, and governments depend on ACLED for the latest reliable information on current conflict and disorder patterns.
7 July 2020
Share
TweetShare on Twitter Share on FacebookShare on Facebook Share on LinkedInShare on LinkedIn