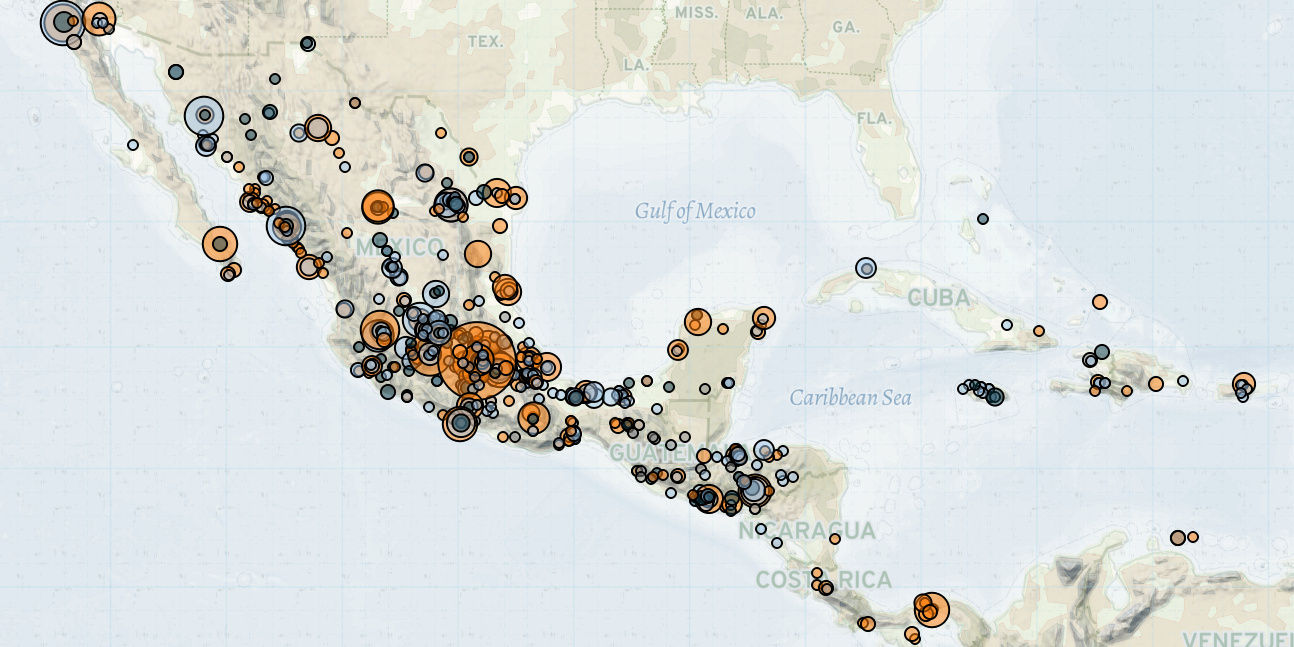 Last week, demonstrations in Central America and the Caribbean continued to decrease, reaching similar levels as to those registered in early June. Coronavirus-related mobilization still represents the largest driver of protests, with health workers asking for better labor conditions and further lockdown measures while workers from a variety of sectors demand the reopening of businesses. In Mexico, anti-government protests continued for the third consecutive week, and in Trinidad and Tobago riots over police violence were registered across the island. Deadly gang violence continued around the region.

Demonstrations directly related to the coronavirus pandemic accounted for over 40% of all demonstrations reported last week. Against the backdrop of delays in the lifting of coronavirus sanitary measures in some countries (US News, 5 July 2020), taxi-drivers, street vendors and workers from the tourist sector protested in Guatemala, Honduras, and in Mexico, demanding the re-opening of businesses. In Panama, the New Generation movement protested for the second consecutive week, calling for the creation of new job opportunities in response to the economic downfall caused by coronavirus-related measures. In parallel, health workers in El Salvador, Mexico, and Panama mobilized, asking for equipment to treat coronavirus patients, better compensation, and stricter lockdown measures. In Mexico, several violent incidents were reported, including the attack of a nurse in the state of Mexico by local residents who feared he might be carrying the virus. In Chiapas, members of an indigenous community in Aguacatenango attacked a city hall worker who was sanitizing crops, accusing him of spreading the coronavirus.

In Mexico, another weekend of anti-government protests was organized by supporters of the ‘National Front against AMLO’ (FRENA), with vehicle caravans in Mexico City as well as across a number of other states.

In Trinidad and Tobago, the killing of three men during a police intervention on 27 June triggered riots over several days. In Port of Spain, a woman was killed and three more people were injured after police reportedly opened fire against demonstrators. Meanwhile, in Laventille, the vehicle of a police officer was firebombed on 30 June, in an event thought to be connected to the unrest. The same day, 72 people were arrested across the country for their participation in the upheaval, including the leader of the New National Vision party, which joined the Better United coalition led by the Congress of People party (COP) ahead of the 2020 general elections. Similarly, in Cuba, a number of prominent members of the opposition, such as the leader of the Patriotic Union of Cuba (UNPACU) José Daniel Ferrer, as well as activists and journalists were detained or placed under house arrest. The arrests aimed to prevent them from staging a protest over the killing of a man, shot dead by law enforcement two weeks ago for not wearing a facemask and for allegedly throwing rocks at officials.

Elsewhere in Mexico, violent competition between the Santa Rosa de Lima Cartel and Jalisco New Generation Cartel (CJNG) over the state of Guanajuato continued, with the killing of the family lawyer of the Santa Rosa de Lima Cartel leader by the CJNG. The Santa Rosa de Lima Cartel, which showed increased levels of activities in the past months and following the arrest of 26 members of the cartel two weeks ago, also claimed responsibility for a video-recorded ambush of three police officers. The cartel’s violent exactions culminated with a targeted attack of a rehabilitation center, where 26 people died — a month after a similar attack was perpetrated in Irapuato (ACLED, 10 June 2020). In Zacatecas, the video execution of a CJNG member was released by the Sinaloa Cartel as part of the standoff that opposes the two other criminal groups over the control of the state. Further activities of the CJNG were reported in the states of San Luis Potosi, Nayarit (where the group announced the imposition of a new tax), and Michoacan, with the release of yet another video, claiming responsibility for a clash with military officers and several roadblocks. In the video, the cartel disclosed that the military officers were supported by members of Los Viagras, a gang that benefits from large popular support and represents a strong opposing force to the control of the state (Insight Crime, 11 June 2020). Meanwhile, in Tamaulipas and in bordering Nuevo Leon, there were reports of two clashes involving the Cartel del Noreste and its armed splinter group, Tropa del Infierno, with law enforcement, resulting in 2 and 12 fatalities, respectively.

In Honduras, a prominent Barrio-18 leader, Boxer Huber, was killed by a member of the MS-13 criminal group in a high security prison in Tamara. Barrio-18 and MS-13 have been historical enemies, fighting over the control of the drug trafficking corridor in the Northern Triangle. Prison clashes between the two gangs are frequently reported, as criminal groups continue to manage their criminal activities from jail.

Despite the lowest numbers of events involving violence against civilian in months, civilians continue to be targeted by gang violence in the region. In Jamaica, two pregnant women were killed in separate yet connected retaliatory attacks. In Honduras, members of the Barrio-18 group killed two journalists in La Ceiba.