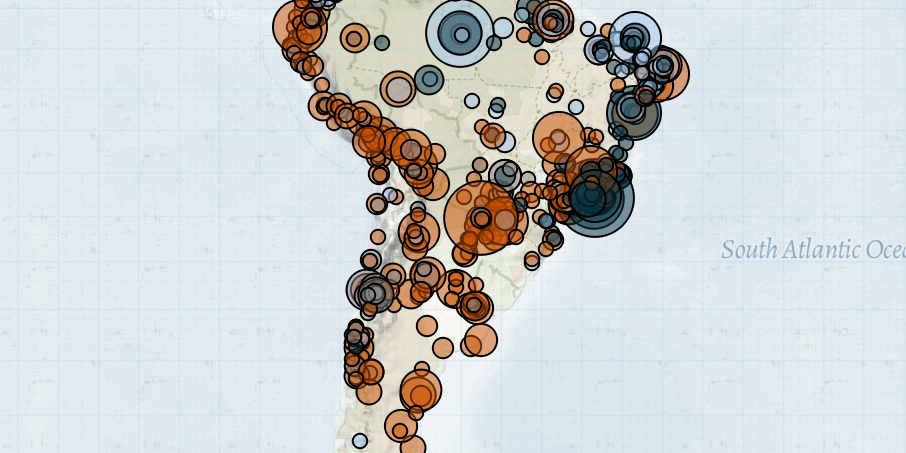 Last week in South America, key developments include: increased demonstrations over coronavirus-related issues across the region; increased political unrest in Chile; political killings and clashes between armed groups in Colombia; continued armed clashes between criminal groups in Brazil; and the inauguration of Suriname’s new president.

The number of pandemic-related demonstration events slightly increased in the region last week. In Argentina, two prisoners died in a clash with police during a demonstration demanding better living conditions, after a prison guard was reported infected with the virus. In Chile, demonstration events significantly increased across the country, after citizens took to the streets to demand the approval of a law that would allow citizens to withdraw 10% of their retirement fund to face the economic crisis. Clashes were reported between demonstrators and police forces, with rioters attacking several police stations. In French Guiana, the newly appointed Prime Minister Jean Castex was met with a protest in Cayenne, as citizens demanded better government measures countering the negative impacts of the pandemic amid a rising number of infections. In Paraguay, merchants, truck drivers, and taxi drivers staged protests and organized motorcades across the country to demand the reopening of economic activities and to call for financial aid from the government. Similar protests were also recorded in Brazil, while health workers also protested, calling for the payment of delayed salaries amidst a fractured health system.

In Venezuela, citizens continued to demand the distribution of potable water, fuel, and electric power amidst an economic crisis worsened by the pandemic. In Isla Toas, Zulia state, one fisherman was shot dead by Coast Guards and Bolivarian National Guard (GNB) officials while taking part in a protest to demand access to fuel. In addition, over 80,000 Venezuelans in Colombia have gone back to their home country since the beginning of April (International Rescue Committee, 15 July 2020). President Nicolás Maduro recently accused returning migrants of increasing the number of infections in the country, as many use illegal crossings controlled by armed groups to avoid the strict quarantine on return imposed by the government (El Espectador, 16 July 2020).

Meanwhile, in Chile, the crisis between Mapuche indigenous people and the government has further deepened, after a well-known, imprisoned Mapuche activist, serving a prison sentence, was hospitalized following a 75-day hunger strike (Biobio Chile, 17 July 2020). Protesters took to the streets to demand the release of Mapuche prisoners and the return of their ancestral lands. In Los Lagos region, protesters delivered a letter to local authorities, claiming they would turn to radical actions if the government continues to ignore the demands of the Mapuche people (El Llanquihue, 18 July 2020). The Mapuche people demand restitution of land rights in areas either controlled by agricultural and forestry companies, or where the government undertakes hydroelectric infrastructure projects, affecting the indigenous communities living in the area (International World Group for Indigenous Affairs, Chile 2020).

In Colombia, clashes continued to be reported between military forces and insurgent groups. In Norte de Santander, two soldiers were killed and eight were injured when unidentified armed individuals activated explosives while a military truck was in the area. In Chocó, one Embera indigenous girl was killed in the crossfire between the Gulf Clan and the National Liberation Army (ELN). Different armed groups vie for the control of coca production in the area.

Additionally, political killings continue to be reported elsewhere in the country, with one former member of the Revolutionary Armed Forces of Colombia (FARC) killed in Meta, and another killed in Huila. In Cesar, one farmer was killed by unidentified individuals, while four farmers were killed in a drive-by shooting attack in Huila. In Cauca, the president of a local Council of Communal Action (JAC) was killed inside his house by four unidentified armed men. Social leaders, mostly representing farmers, indigenous, and Afro-Colombian communities, are often targeted by armed groups in Colombia in areas where these groups fight for control of drug trafficking routes (El Espectador, 3 July 2020).

Clashes between criminal groups and state forces continued in Brazil, while organized criminal groups clashed amongst themselves in territories across the country. In São Gonçalo city, Rio de Janeiro state, two Military Police officers were found dead inside a car after being abducted by suspected members of a drug trafficking group. In Manaus city, Amazonas state, a woman who belonged to the Family of the North (FDN) was abducted, tortured, and beheaded by Red Command (CV) members in a so-called “crime tribunal,” an occasion where a person is judged and condemned by a criminal group, according to the group’s internal rules and principles. Without one hegemonic gang controlling northern Brazil, Amazonas state has been in dispute between the CV and the FDN for several years, with the FDN losing ground in the past months (Insight Crime, 5 March 2020). In addition, the number of attacks on civilians perpetrated by drug trafficking groups and police militias increased compared to the previous week, with a total of 25 reported events across the country.

On 16 July, Chan Santokhi was inaugurated as the new president of Suriname, ending the decade-long rule of Desi Bouterse. While no related disorder has been reported as of yet, Santokhi will likely face major challenges, especially regarding government corruption and the increased trafficking of cocaine and illegal gold in the country (Insight Crime, 16 July 2020).