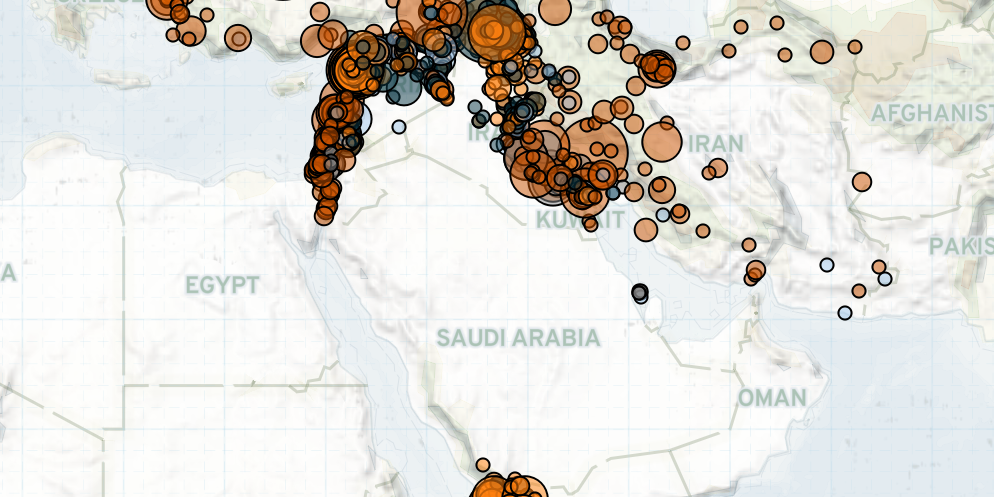 Last week in the Middle East, it was generally quiet as event counts were low across many countries with a few notable exceptions. In Yemen, clashes between Houthi and anti-Houthi forces decreased along with Saudi-led airstrikes. In Syria, Israeli airstrikes led to heightened regional tensions between Israel, Iran, Syria, and Lebanon. Meanwhile, demonstrations in Iraq against infrastructural issues related to water and electricity supply increased as did those in Israel against Prime Minister Netanyahu.

In Yemen, clashes between Houthi and anti-Houthi forces decreased last week as most conflict was limited to the Sirwah and Nihm fronts on the Marib-Sanaa border and Qaatabah district in Ad Dali governorate. However, infighting increased within the anti-Houthi forces. In Taizz governorate, the 35th Armoured Brigade and forces loyal to Tariq Saleh clashed with joint pro-Islah forces in At Turbah and the greater Al Hijriyah region, on the Taizz-Lahij border (Middle East Eye, 26 July 2020). In Abyan, pro-Southern Transitional Council (STC) forces clashed with pro-Hadi forces, despite a 26 June Saudi-mediated ceasefire agreement (Middle East Monitor, 22 July 2020). The clashes in Abyan governorate were relatively mild, and no fatalities were reported.

Notably, the Saudi-led coalition significantly reduced its airstrikes in Yemen relative to recent weeks, and refrained from conducting airstrikes in Sanaa, the Houthi-controlled capital city. Likewise, Houthi forces have not claimed an attack in Saudi Arabia since 13 July, representing a significant period of calm after an active June and early July.

Gunmen affiliated with Al Qaeda in the Arabian Peninsula (AQAP) and the Islamic State (IS) were reportedly active in Abyan governorate last week. On 22 and 23 July, unidentified gunmen, suspected by pro-STC sources to be AQAP, reportedly assassinated a commander and a soldier in the pro-STC Security Belt Forces (YNP, 23 July 2020; Aden al-Ghad, 24 July 2020). These attacks represent AQAP’s first activity since 6 May, when it conducted an IED attack on Houthi forces in Al Bayda governorate. IS claimed a multi-faceted attack on Houthi forces in northwest Al Bayda governorate, but did not claim to have caused any fatalities.

Meanwhile, in Syria, Israeli airstrikes on regime, Hezbollah, and pro-Iran forces in southern Syria, including in Damascus and Quneitra, reportedly killed several militants, including a Hezbollah member. This significantly increased tensions between Syria/Lebanon and Israel (Middle East Monitor, 22 July 2020). These events were followed by an incident in the Syrian airspace over Tanf in southern Syria, when a US aircraft approached an Iranian Mahan Air commercial aircraft en route to Beirut that had members of Hezbollah and the Iranian Islamic Revolutionary Guard Corps (IRGC) on board. During the event, the pilot abruptly dropped altitude, which triggered panic aboard and led to several minor injuries (Al Jazeera, 24 July 2020). Furthermore, on 27 July, Hezbollah members who reportedly tried to enter Israel in the border area of Shebaa Farms were stopped by Israeli forces (Israel Hayom, 27 July 2020). Israel’s northern border has been tense since the airstrikes that killed a Hezbollah fighter in Syria. A Hezbollah statement said that its fighters were not engaged in a clash nor infiltration attempt but warned that their retaliation was still coming (BBC, 27 July 2020).

Elsewhere, regime and allied forces continued shelling areas in northwest Syria and brought military reinforcements to the contact lines with opposition and Islamist factions. In Dar’a, attacks by unidentified gunmen using small arms fire or IEDs against regime elements continued, while one suicide attack against regime forces was carried out by IS.

Last week in Iraq, there was a sharp increase in demonstrations in the first half of the week against the government’s continued failure to address the faulty water and electricity infrastructure across the country. These infrastructural issues have left some citizens without fresh water and without electricity in 50+ degree Celsius temperatures. Approximately half of all demonstration events throughout the week were peaceful.

Also in Iraq, a new rocket attack against US facilities located in Baghdad’s Green Zone was reported. Three rockets landed near the US embassy; the attack was later claimed by the Iranian-backed Usbat Al Thaireen group (Xinhua, 19 July 2020). For what is now the third week in a row, a US logistics convoy was targeted in an attack claimed by Ashab Al Kahf (Taghrib News, 25 July 2020). The Bismayah military base that houses Spanish troops as part of the US-led global coalition in Baghdad was also targeted by three rockets shortly before a handover of the base to Iraqi military forces was scheduled to take place. There were no reported fatalities, and the handover took place as planned (Basnews, 25 July 2020).

Finally, in Israel, protests against PM Netanyahu have sharply increased and are primarily led by the ‘Black Flag’ movement calling for the resignation of the PM. Anger against the PM is growing due to allegations of corruption against him, as well as the government’s mismanagement of Israel’s second wave of coronavirus. On 25 July, Israeli police forcefully dispersed a protest against the PM, attended by thousands of protesters, with water cannons (Haaretz, 26 July 2020). The protest was held in front of the PM’s house in Jerusalem.