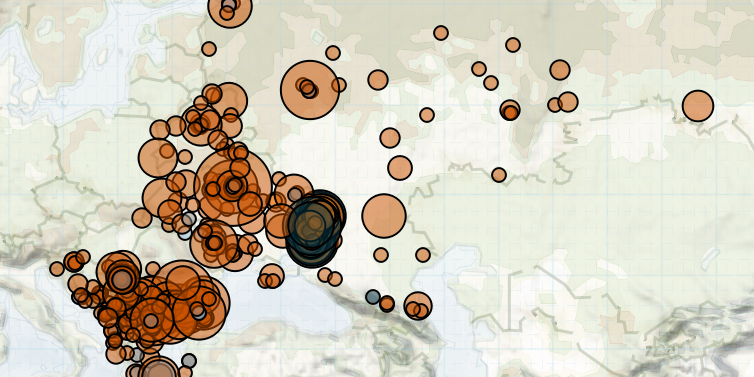 Last week in Eastern Europe, demonstration activity slightly decreased. Key regional developments include: major demonstrations in Russia against what is perceived to be the politically motivated arrest of a governor in the Khabarovsk Oblast; widespread demonstrations in Belarus ahead of the August presidential election; and continued anti-government demonstrations in Bulgaria and Moldova.

Anti-government demonstrations continued in Russia and Belarus as both countries’ governments faced increasingly determined and cohesive opposition. In Russia, demonstrations continued in support of the former governor of Khabarovsk Sergei Furgal, who was detained and is facing murder charges which many perceive as politically motivated. Some demonstrators have shifted their rhetoric and called for Putin’s resignation (Tayga.Info, 25 July 2020). In Belarus, thousands gathered in Minsk and several other cities and towns across the country for the electoral rallies turned-demonstrations of the main opposition presidential candidate, Svyatlana Tsikhanouskaya (RFE/RL, 26 July 2020). The widespread opposition movement across the country and consolidation of the opposition’s leadership behind Tsikhanouskaya indicates a degree of social momentum in the typically fragmented opposition.

Anti-government demonstrations continued in Bulgaria and Moldova as both governments survived votes of no confidence. In Bulgaria, anti-government demonstrations calling for the resignation of Prime Minister Borisov, his chief prosecutor, and center-right government continued daily throughout the country. Parliament voted down a no-confidence motion against the prime minister and his government called by the opposition over concerns of corruption and links to criminal groups (Deutsche Welle, 21 July 2020). In Moldova, Transnistrian War veterans continued their demonstrations against the government and demanded the government’s resignation over unpaid health benefits and the installation of checkpoints between the Transnistrian separatist region and Moldova (IPN, 20 July 2020). The no-confidence motion against the cabinet, called by the opposition in response to poor governance and poor foreign policy among numerous other concerns, failed to pass through parliament (BNE News, 21 July 2020).

Regional military tensions in Ukraine, and between Greece and Turkey, continued amid efforts to de-escalate. The Trilateral Contact Group on Ukraine reached a new agreement on a ceasefire starting from 27 July (Presidential Office, 22 July 2020). Previous ceasefires following this model have decreased the level of fighting in Donbas for several weeks before collapsing. In Donbas, fighting between Ukrainian government forces and Russian-led separatists continued at similar levels to weeks prior, with 84 armed clashes and 135 shelling incidents resulting in two reported fatalities. In Greece, Greek naval forces were put on increased readiness after the Turkish Navy deployed to the Aegean Sea. This follows Turkey’s announcement that it plans to conduct seismic research south and east of the Greek island of Kastellorizo, a territory claimed by Greece, as part of its oil and gas drilling mission (Ekathimerini, 23 July 2020; Ekathimerini, 24 July 2020).