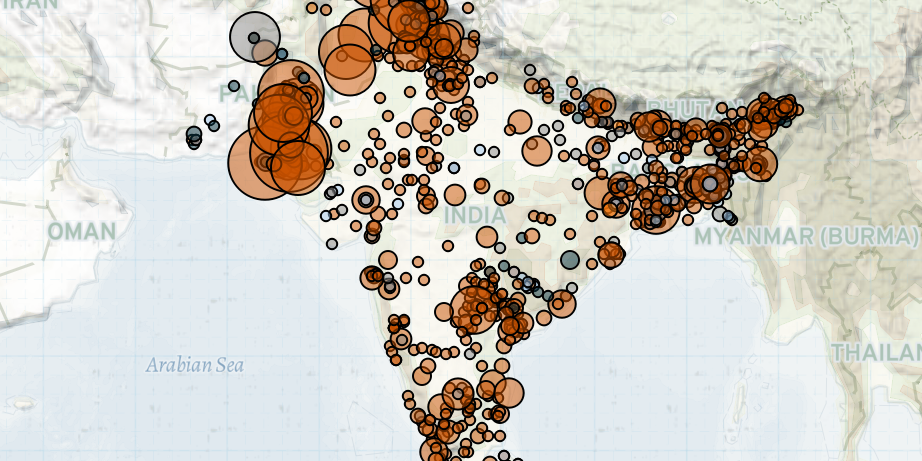 Key trends in South Asia last week include: remote violence targeting civilians in Pakistan; a decrease in armed clashes between security forces and domestic rebel groups in India; continued coronavirus-related violence in India; and violence against journalists in Pakistan.

In Pakistan, 17 people were injured when a bomb exploded at a busy open-air market in Parachinar city of Khyber Pakhtunkhwa province. No group has claimed responsibility for the bombing. In the past, Parachinar, home to mainly Shiite Muslims, has been a target of sectarian violence (Dawn 1 April 2017). In 2017, multiple bombings targeting Shiite Muslims were recorded, including one in June in which 72 people were killed after two explosions occurred in the same open-air market of Parachinar. Lashkar-e-Jhangvi (LeJ) — an offshoot of Ahle Sunnat Wal Jamaat (ASWJ), a radical Sunni Muslim political party — claimed responsibility for the explosions (Diplomat, 20 September 2016). As well, in Balochistan, one person was killed in an explosion at a market. No group has claimed responsibility for the incident. In recent weeks, several organized violent events by Baloch separatist groups have been recorded, and in retaliation security forces have launched a military operation in the province (Arab News, 5 June 2020).

Elsewhere in India, two Naxal-Maoist rebels were killed in armed clashes with security forces in Andhra Pradesh and Odisha. In April, Naxal-Maoist rebels operating in the Andhra Pradesh and Odisha border region had called for a truce, citing the spread of the coronavirus (Hindu, 19 July 2020). In Odisha, 10 armed clashes and five fatalities have been reported so far this year. While in Andhra Pradesh, the clash last week was only the second such event this year; no fatalities have been reported thus far. Barring one incident of property destruction in East Godavari district, there has been no major Naxal-Maoist activity in Andhra Pradesh since the beginning of the year. While in Odisha, local police have stepped up anti-Naxal operations in Naxal-Maoist stronghold districts (New Indian Express, 9 July 2020).

Coronavirus-related violence continued in various states across India, including in Assam, J&K, Karnataka, Jharkhand, and Bihar. In Assam and J&K, frontline staff and health workers were assaulted while performing their duties at quarantine centers and contact tracing patients. In Assam, security forces assaulted and injured civilians while enforcing lockdown restrictions. In Karnataka, locals and family members of a deceased coronavirus patient set an ambulance on fire and attacked hospital staff after the patient’s death at the hospital. In Jharkhand, locals clashed with security personnel objecting to the burial of a coronavirus victim in their village. In Bihar, a coronavirus patient was assaulted by staff at a hospital mess for entering the kitchen to ask for food.

Finally, in other developments, in Pakistan, a prominent journalist and critic of the state’s military and intelligence services was briefly abducted by men dressed in plain clothes and police uniforms. Pakistan often ranks as one of the most dangerous countries in the world for journalists, and the state’s security services have been accused of involvement in violence against journalists (BBC, 31 March 2020; Dawn, 1 May 2020). In June, two journalists were assaulted and injured by paramilitary forces in Balochistan for reporting about the lack of food, water, and other basic facilities at a coronavirus quarantine center. In March the Editor-in-Chief of Jang Media Group was arrested by the National Accountability Bureau (NAB) in connection with an accountability case over the purchase of a piece of land. Prior to the arrest, the media group had received dozens of notices from NAB, threatening to shut down the channel due to their coverage about the institution (Dawn, 12 March 2020). Since the arrest, demonstrations have continued across Sindh, Punjab, and Khyber Pakhtunkhwa demanding his release. Demonstrators consider the arrest to be an attack on media freedom in Pakistan.