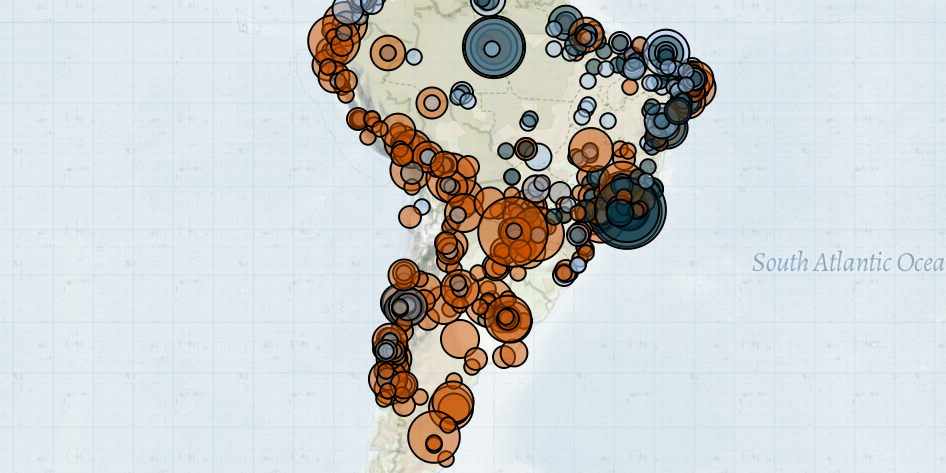 Last week in South America, demonstrations over coronavirus-related issues remained steady across the region. Political killings in Colombia have increased, as well as political unrest in Bolivia, Chile, and Venezuela. In Argentina, pot-banging protests took place throughout the country. In Brazil, armed clashes continued to take place between criminal groups and state forces.

Pandemic-related demonstrations remained steady in the region last week. In Paraguay, health workers protested across different cities, demanding proper medical equipment for the fight against the coronavirus (ABC, 26 July 2020). Furthermore, a demonstration took place in Ciudad del Este against the reimplementation of total social isolation measures triggered by the increase in coronavirus cases in the province of Alto Parana. Demonstrators were composed mostly of street vendors, who set trucks and tires on fire, looted and destroyed local commercial establishments, and clashed with the police. It was reported that both police forces and demonstrators used guns during the clash (La Nación, 29 July 2020). On the following day, the government suspended some of the emergency measures and allowed the population to work from Monday to Saturday, resolving tensions (La Nación, 30 July 2020). In both Paraguay and Argentina, several labor groups held protests, demanding their right to work during the pandemic. In Bolivia, prisoners incarcerated in Cochabamba city, Sacaba, and Quillacollo, carried out protests requesting amnesties and coronavirus tests (Correo del Sur, 27 July 2020). In Brazil, different labor groups continued to stage protests to demand the re-opening of businesses considered to be non-essential. Bus drivers, tourism workers, street vendors, and informal workers represent part of the groups participating in the demonstrations. Additionally, private school owners and teachers carried out protests to demand the reopening of schools, not only as a way to prevent students from losing the school year, but also to cater to parents who had to return to work. Motorcades were organized by school owners in Fortaleza, Brasília, Belém, and Divinopolis.

In Bolivia, following the rescheduling of presidential elections from September to October due to the coronavirus pandemic (for more, see this recent ACLED CDT Spotlight: Elections Postponed in Bolivia), the Movement for Socialism (MAS) demonstrated in Sucre, Parotani, and El Alto against its postponement. In El Alto, the demonstrations took a violent turn when members of the Bolivian Workers’ Center (COB) and MAS members attacked journalists and ambulances, prompting the police to intervene with tear gas (Correo del Sur, 28 July 2020; Los Tiempos, 28 July 2020).

In Chile, demonstrations remained high as President Sebastián Piñera gave his state of the nation speech. Several protests and demonstrations against the government were reported across the country. Near the Congress building in Valparaiso, a group of citizens staged a pot-banging demonstration and subsequently clashed with police forces after a group built barricades across the city (Biobio Chile, 31 July 2020).

Meanwhile, the conflict between Mapuche indigenous people and local officials escalated as groups of Mapuche activists occupied government offices across the Araucania region to demand the release of arrested Mapuche individuals whom they consider to be political prisoners, as well as to show support to one of their leaders who is on a hunger strike in prison. In Curacautin, nearly 400 rioters attacked and set fire to the vehicles of Mapuche activists that participated in the demonstrations (Biobio Chile, 1 August 2020). The Araucania and Biobio regions constantly experience attacks from indigenous groups who demand land restitution from areas controlled by forestry companies.

Protests in Venezuela remained steady as citizens took to the streets in various cities across the country to demand basic services, fuel, and medical treatment. In Tachira, the presence of members of the National Liberation Army (ELN) increased; members of the ELN have established new bases throughout the entire state (El Pitazo, 28 July 2020).

In Colombia, various attacks against civilians took place, which culminated in a total of 15 reported fatalities, including indigenous peoples, social leaders, as well as a former FARC member. Equally important, explosives were activated in the Cauca department and Valle del Cauca; no fatalities or injuries were reported. One of those explosives targeted a female Afro-Colombian social leader (El Tiempo, 28 July 2020).

In Argentina, citizens carried out pot-banging protests in Buenos Aires and neighboring cities against a judicial reform bill introduced by President Alberto Fernandez, which they believe to be a measure adopted to protect former President and current Vice President Cristina Kirchner from corruption trials (La Nación, 30 July 2020). The proposed bill would dilute the power delegated to judges and duplicate the number of criminal courts. The opposition claims this would allow for the incorporation of new allied judges that would allow the government to move forward with a hegemonic project that would exonerate Kirchner from the multiple corruption charges that she faces (UOL, 30 July 2020).

In Brazil, at least 38 people were killed in clashes between state forces and armed groups. In the state of Cuiabá, six members of an organized criminal group were killed during a police operation, including a military police officer and a son of a military sergeant (G1, 29 July 2020). In the city of Rio Branco, Acre, 36 local leaders of the First Capital Command (PCC) were arrested in an operation to combat organized crime (O Rio Branco, 30 July 2020). Other similar operations took place in different cities as part of a coordinated effort to dismantle organized crime. Furthermore, many events were recorded in the state of Rio de Janeiro, specifically armed clashes between state forces and organized gangs, especially involving the Red Command (CV).

Also in Brazil, a large-scale attack targeting bank agencies took place in Botucatu, São Paulo. A group of 30-40 individuals used armored cars and explosives, held civilians hostage, and engaged in a shoot-out with police for more than two hours. One of the rifles used by the suspects had a symbol connected to the PCC; the police investigated whether the gang was responsible for the attack (R7, 30 July 2020). One police officer was injured during the attack. The following day, the police found and killed one suspect from the group (G1, 30 July 2020). In the context of a growing number of similar events in small and medium-sized cities in the southeast region of Brazil, this event constitutes a modus operandi for the group that has been labeled as ‘New Cangaço’: the attacks are usually organized by the PCC and are carried out by its factions across the country (BBC Brazil, 31 July 2020).