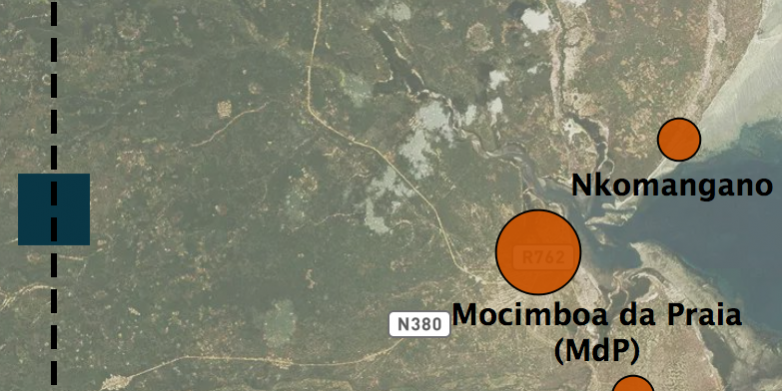 Please note: ACLED’s real-time data updates are currently paused through 1 August 2020. Data for 2 August to 5 September will be released on 7 September. All ACLED data are available for download via the data export tool, and a curated Mozambique dataset is available on the Cabo Ligado home page.

The story of the week is the fall of Mocimboa da Praia  — including the government’s port stronghold  — to insurgent occupation. It is difficult to overstate the importance of the battle. For insurgents, it is the culmination of a sophisticated plan that included massing forces, coordinating attacks throughout Mocimboa da Praia district, and infiltrating state security forces through forged documents (Carta de Mocambique, 17 August 2020). The attack indicates significant, rapid improvement in insurgent capabilities, in terms of both resources  — the attack relied on the largest gathering of insurgent manpower yet seen in the conflict  — and tactics. The prize means a great deal to the insurgents. Mocimboa da Praia is where the violent phase of the insurgency began in 2017, and they have told local citizens that they hope to turn the town into their capital (VOA, 13 August 2020).

For the state, the loss of Mocimboa da Praia is a major blow. The Mocimboa da Praia port is the state’s main source of resupply for its war effort in the north of Cabo Delgado. The town is also a major logistics hub for the liquified natural gas projects further north near Palma. Even as Mozambican forces were withdrawing from Mocimboa da Praia, Mozambican President Filipe Nyusi was assuring World Bank president David Malpass that the gas projects would not be threatened by the conflict (VOA, 11 August 2020). That assurance seems shakier now than it did two weeks ago. The loss is also crushing from a morale perspective. Retaining Mocimboa da Praia was a government priority — Mozambican armor was based there and the modern naval ships that nearly bankrupted the country sometimes docked there (Line of Actual Control, 10 August 2020; Financial Times, 17 March 2016). Now one of those ships has been sunk and some of the military’s best-trained units have been defeated in battle.

An updated timeline dating back to preliminary insurgent operations on 5 August is available in this week’s Incident Focus below.  To summarize last week’s key events in Mocimboa da Praia:

Security forces in other areas of the province have been skittish since the Mocimboa da Praia attack. Shooting was reported the night of 13 August in Macomia town and Namacande, the capital of Muidumbe district. In Namacande, a source later learned that security forces were doing the shooting to warn unseen insurgents of their readiness to defend the town, and sources in Macomia speculate that the same motive accounts for the shooting there. On 15 August, the body of a man who was last seen in security force custody was found outside Macomia town. The next day, also in Macomia town, police special forces arrested three young men at a bar and accused them of being insurgents. That arrest follows the 9 August arrest, in the Pemba area, of three armed men accused of being members of the insurgency. Both arrests may have arisen from increased security surrounding President Nyusi’s visit to Cabo Delgado on 14 August.

Lastly, in Pemba, reports on social media claim that a tip led police to a car carrying five disassembled firearms and attendant ammunition on 13 August. It is not clear what type of weapons were in the car, nor their intended destination.

As more information has filtered out of Mocimboa da Praia, a clearer timeline of events there has emerged. The following is adapted from a timeline put together by conflict analyst Johann Smith, in combination with information from other sources.

5 August: Insurgents began their advance, first attacking Anga and Awasse villages, which sit on strategic routes into Mocimboa da Praia town, and then the outlying Mocimboa da Praia neighborhoods of Milamba and Nabubussi. Insurgents encouraged residents to leave areas they were entering, and most did. In Anga, insurgents burned homes and abducted an unknown number of civilians.

6 August: Insurgents secured their positions at Anga and Awasse and began to push through Mocimboa da Praia town, toward the port. Contacts reported that a few insurgents withdrew by boats in the face of government counterattacks. According to Smith’s report, insurgents used 82mm mortars to cover their withdrawal. If true, it would mark the insurgency’s first confirmed use of indirect fires in the conflict. The last rumored use of mortars was in the last battle for Mocimboa da Praia, on 27 June.

9 August: Battle lines hardened, with government forces withdrawn to the port district and insurgents in control of the rest of the town. Fighting was intermittent, as insurgents spent the day destroying electrical and communications infrastructure, presumably in preparation for a final assault. Insurgents also attacked government forces at Ntotwe, on the N380 between Mocimboa da Praia town and Awasse, forcing a government withdrawal.

10 August: Insurgents began their final assault on the port district. Government ammunition supplies there grew dangerously low, and a resupply was attempted using Dyck Advisory Group (DAG) helicopters. That attempt failed and the ammunition was dropped outside the government’s zone of control, likely due to faulty communication between air and ground units — a problem that has bedeviled cooperation between DAG and Mozambican forces from the start. DAG helicopters also had trouble as they had little fuel with which to linger over Mocimboa da Praia after departing from Pemba. It is unclear why the much closer, recently established airfield at Macomia or the airfield at Mueda was not used. Either would have nearly halved the distance between the helicopters’ base and the battle, significantly increasing DAG’s time on target. A convoy of government reinforcements from Mueda, made up of soldiers who had just finished their training, was ambushed at Awasse, resulting in over 55 soldiers being killed. Two HSI32 Interceptor ships entered the Mocimboa da Praia harbor, and insurgents sunk one with an RPG. Government forces began their withdrawal by the end of the day.

11 August: Government forces withdraw and insurgents gain control of the port area. DAG helicopters covered the withdrawal, but an unconfirmed report suggests that DAG asked government troops to drop their weapons before withdrawing so that DAG gunners could distinguish them from insurgents. In addition to underlining the communication problems between DAG and Mozambican ground forces, that decision increased the haul of weapons the insurgents were able to secure.

15 August: Sharp clashes occurred around Mocimboa da Praia, according to contacts, but insurgents remained in control of the town.

In addition to the troubles coordinating with DAG detailed above, Mozambican forces also showcased two other, related weaknesses in their failed defense of Mocimboa da Praia. The first is inexperience. While the fuzileiros defending the port acquitted themselves well in the battle, only withdrawing when supplies ran out, the reinforcements the government sent were too green to be effective. Instead, they fell victim to another of the government’s strategic weaknesses: the fact that government forces can only move in strength along Cabo Delgado’s small number of passable roads. Insurgents were easily able to predict the route that reinforcements would arrive on, and set up an effective ambush. That ambush, and the Mozambican soldiers’ inexperience in dealing with ambushes, turned the effort to reinforce Mocimboa da Praia into a massacre.

Mozambican defense minister Jaime Neto on 13 August tacitly accepted — and then, backpedaling, rejected — the government’s defeat at Mocimboa da Praia. His official statement was circumspect, saying that “Defence and Security Forces are trying to control the situation [in Mocimboa da Praia], but it is still tense and fluid.” The statement also used the battle to push the frequent government line that insurgents are of foreign origin, claiming that their willingness to stand and fight indicated that they “received additional reinforcement in equipment and men from bases outside [Mozambique].” Speaking to reporters after reading his statement, however, Neto claimed that “at this time, the terrorists control nothing” (Club of Mozambique, 14 August 2020).

President Nyusi used his trip to Cabo Delgado to push another favorite government narrative: that human rights defenders are undercutting Mozambican national security by criticizing state security forces. His comments appeared to presage statements by Frelimo propagandists last week accusing the Catholic Bishop of Pemba, Dom Lisboa, of supporting the insurgency due to his criticism of human rights abuses by government troops. Government communications consultant Egidio Vaz called for the bishop’s Mozambican residency permit to be revoked. Bishop Lisboa has also been vocal in his criticism of insurgent attacks on civilians.

Regionally, on 11 August, Tanzania urged people living near the Mozambican border on the Tanzania side to vacate their homes immediately so that the Tanzanian military could carry out counterterrorism operations in the area (The Citizen, 11 August 2020). Tanzanian forces have been conducting operations in the area dating back to at least March, so the announcement may be more of a public response to the worsening situation in Cabo Delgado than an active change in operations. On 12 August, Mozambican foreign minister Victoria Macamo said that the Tanzanian operations had “de-activated” a group of suspected insurgents attempting to cross from Tanzania into Mozambique and heading for Mocimboa da Praia. Macamo put forth no direct evidence, but did say that the Tanzanian government had confirmed to her that suspected insurgents had been arrested and were attempting to reach Mocimboa da Praia.

Finally, the 40th Ordinary Summit of Heads of State and Government of the Southern African Development Community passed without much progress on the question of regional intervention in Cabo Delgado. The official communique of the summit, which will be discussed in detail in next week’s report, offered little indication that intervention will be forthcoming in the near future. 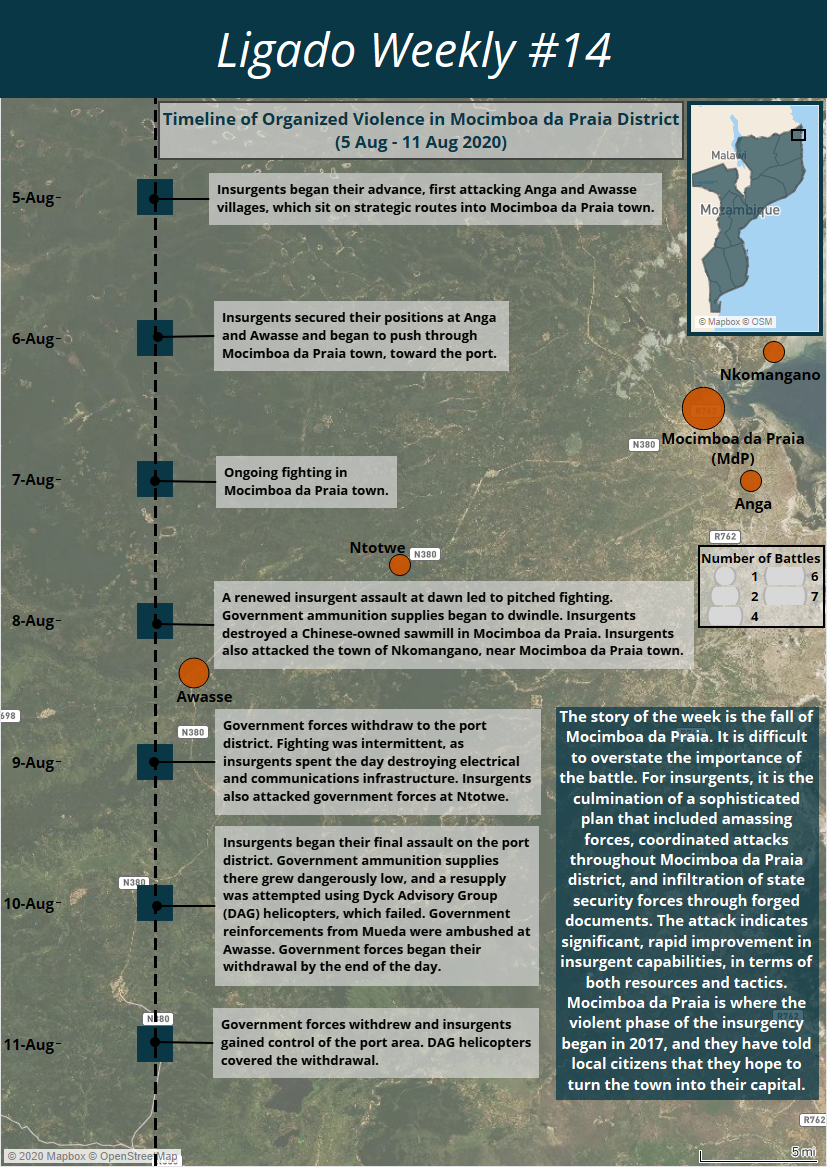