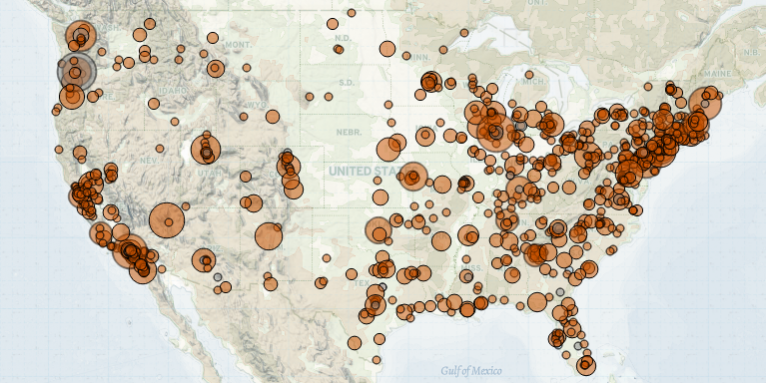 Last week in the United States, the number of demonstration events spiked by more than 40% compared to the week prior. These demonstrations were primarily driven by the Trump administration’s handling of the United States Postal Service (USPS) ahead of the election. Demonstrations associated with the Black Lives Matter (BLM) movement also increased following a number of officer-involved shootings in recent weeks. Supporters of President Donald Trump and the police clashed with demonstrators associated with the BLM movement in several cities, including in Portland, Oregon, leading to criticism over police inaction. Lastly, a number of “Save Our Children” rallies were held against child abductions and sex trafficking, although observers note that many of these events appear to have been organized by supporters of the QAnon conspiracy theory in an effort to boost support for President Trump.

Over one-third of all demonstrations last week were held to demand protections for USPS jobs and services. The rallies on 22 August were part of a day of action organized by the advocacy group MoveOn, the National Association for the Advancement of Colored People (NAACP), Service Employees International Union (SEIU), and a number of other groups and organizations across the country. This comes weeks after Postmaster General Louis DeJoy, a Republican donor appointed to this post in June, ordered the removal of mail processing machines, blue mailboxes, and other infrastructure across the country, warning states not to count on the post office during the November election (NPR, 15 August 2020). Amid the coronavirus pandemic, more than 80 million Americans are expecting to cast their vote by mail in the upcoming election (Cnet, 23 August 2020). Protesters showed their support for postal workers, many of whom have lost a substantial portion of their income due to recent cost-cutting measures (MoveOn, 2020). Cuts to the USPS will especially hurt the Black community; more than a quarter of USPS employees are African-American, which is double their share of the overall US population (Quartz, 7 August 2020).

Similar to the week prior, several confrontations between pro-Trump, pro-police demonstrators, and BLM supporters were reported last week. These occurred in Beverly Hills and Los Angeles, California, as well as in Bloomington, Indiana. In Portland, Oregon, clashes once more broke out between right-wing and left-wing activists. On 22 August, a group of more than 100 right-wing demonstrators, including Proud Boys and armed militia members, staged a “Back the Blue” rally in support of law enforcement and President Trump in front of the Justice Center (Washington Post, 23 August 2020). People carrying shields with references to the QAnon conspiracy theory were also present at the event (OPB, 22 August 2020). The right-wing demonstrators were armed with paintball guns, metal rods, aluminum bats, fireworks, pepper spray, rifles, and handguns. Hundreds of Antifa and BLM supporters held a counter-demonstration. Some of them had fireworks and bottles filled with chemical solutions. The two groups engaged in tense, face-to-face confrontations, pushing, punching, kicking, and throwing objects at one another. Some pro-police demonstrators fired paintball guns and deployed pepper spray against counter-demonstrators, and one was filmed pointing a gun at them. A member of the Proud Boys assaulted a reporter, breaking his finger with a baton (Bellingcat, 25 August 2020). The two sides clashed for about three hours, yet police officers present at the scene did not intervene to stop the fighting (New York Times, 22 August 2020).

Portland police indicated in a statement that those involved in the skirmishes had willingly engaged, and that police forces were stretched too thin to intervene (Portland Police Bureau, 22 August 2020).The police decision not to intervene “was [in] striking contrast to police tactics at several left-leaning Black Lives Matter protests in recent weeks,” where police have declared unlawful assemblies when rioters engaged in property destruction and threw objects at officers (Washington Post, 23 August 2020). Some suggest that the Proud Boys and other right-wing groups have been emboldened by police inaction during their rallies (HuffPost, 25 August 2020).

Meanwhile, recent police shootings sparked several demonstrations over the past week. In Lafayette, Louisiana, demonstrations erupted over the weekend after police killed Trayford Pellerin. While demonstrations in Lafayette remained largely peaceful, on 22 August, some people among the crowd threw rocks and water bottles at police cars shortly after dark. Police arrested two people and used gas canisters to disperse the demonstrators (Acadiana Advocate, 22 August 2020). Pellerin, a Black man, was shot while police were responding to a disturbance call involving a person armed with a knife. Police fired at least 10 shots at Pellerin after they tasered him and he continued to walk away from them, attempting to enter a gas station store.

The Executive Director of the American Civil Liberties Union (ACLU) of Louisiana has called the shooting an “inappropriate and excessive use of force” by police, demanding an independent investigation and reforms “that will end the epidemic of police violence” (ACLU Louisiana, 22 August 2020). A recent report by the ACLU indicates that Black, Native American, and Latinx people are more likely than white people to be killed by police, and that fatal shootings by police have continued unabated despite the coronavirus pandemic (ACLU, 2020).

Meanwhile, in Pasadena, California last week, demonstrations were held on a daily basis to denounce the killing of yet another Black man by police. On 15 August, a police officer fired at least two shots at a fleeing Anthony McClain, who allegedly had a firearm that he later cast aside. McClain ran away from officers with his hand in his waistband after patrol officers stopped a car without a front license plate. The Police Chief said that when McClain looked over his right shoulder, the officer may have feared that he was looking back to take aim (ABC7, 21 August 2020). McClain was on probation for a previous robbery conviction and his fear of the consequences of possessing a weapon might have prompted him to run away from officers (LAist, 25 August 2020). A video — resembling the detention of George Floyd — showing McClain on the ground in handcuffs after the shooting, with an officer appearing to be on his back, has exacerbated outrage in the community (CBSLA, 16 August 2020).

According to the Pasadena Police Chief, tensions were on the rise in the neighborhood before the shooting, as officers had confiscated seven weapons in the week prior and were already on edge. However, the victim’s attorney has argued that shooting a fleeing suspect is not justified, alleging that the officer might have been under the influence of narcotics, making him more aggressive (Pasadena Star News, 22 August 2020). The Pasadena Vice Mayor has joined activists to call for the firing of the police officer who shot McClain, suggesting that he violated policy by turning off his body camera, shooting a fleeing suspect in the back, as well as endangering the public (Pasadena Now, 26 August 2020). In response to McClain’s shooting and amid calls for civilian oversight of police, the Pasadena City Council on 25 August approved the framework for a Community Police Oversight Commission that will be coupled with an independent police auditor (Pasadena Now, 25 August 2020).

Since the death of George Floyd at the hands of the Minneapolis police at the end of May, thousands of demonstrations against racism and police brutality have spread across the US. With the shooting of yet another Black man by police in Kenosha, Wisconsin on 23 August, demonstrations over police brutality are expected to continue in the coming weeks.

Elsewhere in the country, largely peaceful demonstrations were staged ahead of the Republican National Convention in Charlotte, North Carolina, leading to several arrests and the use of pepper spray by police. Demonstrators, who had to scale back their rallies when most of the convention went online, said that “their message that many parts of our community have been left behind since Donald Trump took office should still resonate” (WSOCTV, 25 August 2020). They also expressed their support for the BLM movement. The Convention gave a prominent speaking slot to Mark and Patricia McCloskey, a white couple who pointed guns at BLM demonstrators outside their home in St. Louis, Missouri in June. The McCloskeys, who were criminally charged in connection with the June incident, echoed Trump’s arguments against housing desegregation efforts and low-income housing projects, suggesting that Democrats want to “abolish the suburbs” by ending single-family home zoning (New York Times, 25 August 2020). They alleged this would “bring crime, lawlessness and low-quality apartments into now-thriving suburban neighborhoods” (The Hill, 24 August 2020). Trump has previously spoken out in the McCloskeys’ defense, suggesting that “they were going to be beat (sic) up badly, and the house was going to be totally ransacked and probably burned down like they tried to burn down churches.” He claimed that prosecuting them would be “a disgrace” (The Hill, 14 July 2020). Although the demonstrators trespassed into a private street where the couple’s house sits, the event was peaceful. Despite the McCloskeys’ claim that demonstrators “mashed down” the gate, it remains unclear at what point and by whom the gate was damaged; a video shows that the first protesters walked through an intact gate that was being held open (BBC, 25 August 2020).

In another development, dozens of “Save Our Children” rallies were held across the country on 22 August, in what the organizers said was an effort to raise awareness about child sex trafficking. Marchers demanded stricter laws against pedophilia and greater media attention on sex trafficking. However, some suggest that the “Save Our Children” events have been organized by people who embrace QAnon conspiracy theories, as evident on their social media pages (NBC News, 22 August 2020). Jay Rosen, a professor of journalism at New York University, has criticized the coverage of “Save Our Children” rallies by local media as “credulous,” suggesting that the link to QAnon has been widely overlooked (Jay Rosen, 23 August 2020). The surge in Save Our Children rallies with possible ties to the QAnon “coincidentally or not, came hours before a Republican National Convention that … is desperately seeking to make a public case for a Trump second term” (Philadelphia Inquirer, 23 August 2020). QAnon emerged in 2017 with anonymous posts on the popular conspiracy website 4chan, claiming to reveal high-level government intelligence about crimes and rings of pedophiles among top Democrats, including Hillary Clinton, and Hollywood celebrities. The conspiracy theory claims that Trump is engaged in a secret war against the cabal of child abusers. Trump indicated in a press conference on 19 August that he does not know much about QAnon, but that he understands its supporters “like me very much” and that they “love America” (NPR, 19 August 2020).

The FBI labelled QAnon as a potential domestic terror threat last year (New York Times, 12 August 2020). On 12 August, an intoxicated woman — motivated by QAnon conspiracy theories — chased two strangers’ vehicles in Waco, Texas, with the intent to “[save] a child” from “pedophiles” (Right Wing Watch, 22 August 2020). While the first car evaded the attack, the second car, driven by a 19-year old student, was cornered​ and repeatedly rammed ​in a parking lot. The woman was arrested and has been charged with aggravated assault with a deadly weapon (Waco Tribune Herald, 13 August 2020).