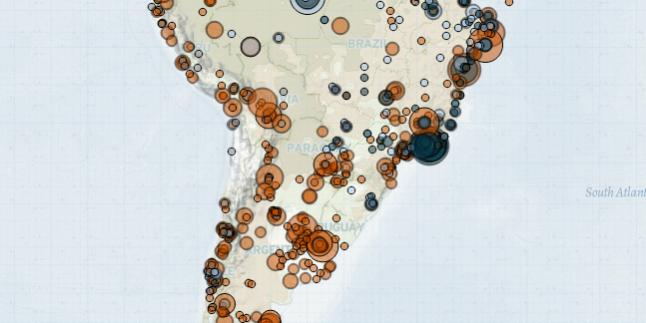 Last week in South America, demonstrations over coronavirus-related issues continued across the region. Meanwhile, killings in Guyana rekindled civil unrest and racial tensions in the country, and political unrest continued to take place in Colombia and Chile. In Brazil, armed clashes continued between criminal groups and state forces.

The number of pandemic-related demonstrations have decreased across the region in comparison to the previous week. In Argentina, police officers in Buenos Aires province protested to demand better working conditions, a salary raise, and more equipment to protect them against coronavirus contagion (La Nación, 9 September 2020). School transportation service workers carried out a protest in the form of a national motorcade to demand the implementation of a coronavirus emergency fund, as well as the suspension of the sector’s activities (La Capital, 10 September 2020). In Peru,  protests were held in Tacna, Arequipa, Juliaca, and Trujillo cities to demand the government act upon the bank loan interests that people are unable to pay because of the economic impact caused by lockdown measures (La Republica, 9 September 2020). In Brazil, labor groups continued to protest to request the re-opening of businesses that are still closed due to the coronavirus lockdown.

Last week in Colombia, several protests and violent demonstrations took place after a man was killed by police officers in Bogota on 8 September. Police officers detained the man for ignoring the quarantine rules implemented due to the pandemic. They subdued the victim and shocked him with a stun gun before he died in the hospital. In major cities across the country, citizens took to the streets to repudiate police brutality. During these demonstrations, ten people were killed by security forces. The United Nations requested a meeting with the government of President Ivan Duque to ask for an investigation and justice for the victims (Colombia Reports, 11 September 2020).

In Guyana, weeks after a disputed presidential election that divided two preeminent racial groups in the country, racial unrest was rekindled after two Afro-Guyanese teenagers were killed in the Mahaica-Berbice region. These killings reopened historical wounds of racial tension between the Afro- and Indo-Guyanese communities and moved the Afro-Guyanese community to carry out protests asking for justice. These in turn developed into violent riots and attacks, which were aimed specifically against the Indo-Guyanese community and led to the killing of at least two Indo-Guyanese people (Kaieteur News, 10 September 2020).

In Argentina, the Paraguayan Embassy and Consulate in Buenos Aires and Resistencia were attacked in light of the killing of two girls on 2 September in Yby Yau, Paraguay. The victims were daughters of Paraguayan People’s Army (EPP) leaders and were killed by Paraguayan security forces during a raid on an EPP settlement. As a consequence, in Paraguay, former Vice President Oscar Denis, of the Authentic Radical Liberal Party (PLRA), was kidnapped by members of the EPP rebel group in Concepcion province. In exchange for Denis’ release, the group requested the release of two of their jailed leaders, as well as  payment of US $50,000 worth of food to 40 communities in which the group is active.

In Peru, several pot-banging protests took place in Santiago de Surco, Jesus Maria, Miraflores, and Cajamarca. The demonstrations were fueled by leaked audio tapes in which President Martin Vizcarra is implicated in corruption and fraud cases. The tapes recorded Vizcarra discussing with government aides ways to cover up the misuse of public funds. Accordingly, a motion to initiate impeachment proceedings was approved by Congress.

As Brazil celebrated its Independence Day on 7 September, many protests were reported both in favor and against the Federal Government. Since parades and similar celebrations were forbidden due to the coronavirus pandemic, most demonstrations took the form of motorcades, marches, and pot-banging protests — in line with trends seen in recent months (for more, see the recent ACLED CDT Spotlight: National & Local Tensions in Brazil). Demonstrations in support of President Jair Bolsonaro were reported in Brasilia, Sao Luis, Recife, and Natal. Protests against the current administration, and its lack of effective policies geared towards minorities and vulnerable groups, were prevalent in Brasilia, Belo Horizonte, Recife, Uberlandia, Boa Vista, and Aracaju. In these latter cities, the protests were led by the Cry of the Excluded, a movement that questions empty patriotic demonstrations and the true meaning of an independent nation built on social and economic inequality and exclusion. Pot-banging protests were also reported in several state capitals during President Bolsonaro’s official statement to the nation on Independence Day.

Furthermore, demonstrations were held in many cities in support of Car Wash Operation (Lava Jato), an investigation focused on uncovering the web of corruption in Brazil. The investigation jolted the country’s businesses and political establishment, and led to the arrest of former President Luiz Inacio Lula da Silva, of the Workers’ Party (PT). In recent weeks, there has been tension between Car Wash Operation prosecutors and the Republic General Prosecutor. Several prosecutors have resigned their positions in the Operation under allegations of political interference.

Moreover, at least 31 people were reportedly killed in armed clashes last week in Brazil, and 41 individuals were killed in violent attacks against civilians. In Rio de Janeiro, clashes between the Third Pure Command (TCP), Red Command (CV), and the military police were reported, and disputes between the CV and TCP for territorial control of areas of the Central Zone of Rio de Janeiro continued (G1, 11 September 2020).

Likewise, in Sao Paulo, tensions were reported for three days in a row in the Luz neighborhood, in an area known as Cracolandia. Military police officers and municipal guards attacked civilians in the area. Tensions have increased during campaigning for the upcoming municipal elections, as candidates have drawn attention to the situation of drug users and drug trafficking in the area, demanding the use of force by the police. According to the police, the operations were carried out in response to attacks by drug traffickers (Ponte Jornalismo, 12 September 2020).

Finally, in Chile, demonstrations continued over the general discontent with the government. Groups of demonstrators gathered on the 47th anniversary of the 1973 military coup in the country. In Recoleta, Metropolitan region, nearly 800 people (Biobio Chile, 11 September 2020) participated in a traditional march towards the national cemetery. Police forces and demonstrators clashed, as the latter used Molotov bombs and other objects against police officers.