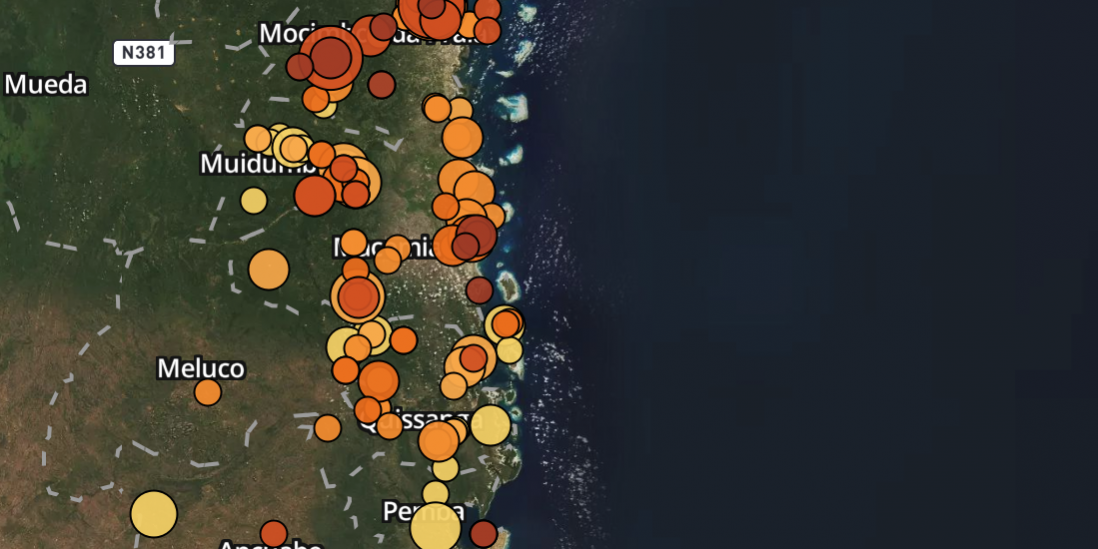 Fears of an insurgent attack increased among civilians in Palma town last week, as insurgents continued to target routes into the town. Elsewhere in Cabo Delgado, food raids persisted in Macomia district, insurgents attempted to disrupt the route between Mocímboa da Praia and the government’s military base at Mueda, and fires unrelated to the insurgency caused an anxious populace to worry about attacks in the south of the province.

Last week’s attacks around Palma began on 14 September, when insurgents entered the village of Quissengue, Palma district in the middle of the day. Most civilians managed to escape to the woods, but insurgents wounded three people and burned down 18 homes. Later, on the same day, insurgents reportedly launched an assault near Diaca, Mocimboa da Praia district, which sits on the N380 road between Mueda and Mocimboa da Praia. The initial assault pushed back Mozambican troops, but the government forces rallied after being reinforced and eventually won the day. Five insurgents died in the fighting.

On 15 September, insurgents held up fishermen in Marijirane (also known as Namadoro), Macomia district, firing into the air just as the day’s catch was being brought in. No one was injured, but insurgents made off with a large amount of fish.

Two days later, insurgents launched another attack in Palma district, this time north of Palma town in the village of Kiwiya. Two local men were cutting wood near their fields when insurgents set upon them, decapitating both.

On 20 September, insurgents — dressed in Mozambican military uniforms — entered Litamanda, Macomia district, and fired into the air to disperse civilians, much as they had at Marijirane five days earlier. Again, no one was injured, and one source noted that there seems to be a pattern of the insurgent contingent in Macomia district requiring raids to acquire food supplies.

In Macomia district, a possible clash took place when Dyck Advisory Group (DAG) helicopters fired shots in the area between Licangano and Xinavane — just southwest of Macomia town — on 18 September after a local woman reported suspicious movements in the area. No information has yet appeared about whether the helicopters hit anything.

Farther south, fires on 18 September at the Situ Island Lodge near Pemba and in the village of Namavi, Metuge district started rumors that insurgent attacks were underway. However, there is no evidence that insurgents had anything to do with either incident. They appear to have been accidents or unrelated acts of arson.

The Mozambican government doubled down last week on its denial that videos showing horrifying actions by state security forces in Cabo Delgado are real. In a press conference on 15 September, Mozambican Interior Minister Amade Miquidade called a video — in which men wearing Mozambican military uniforms beat a naked woman before shooting her 36 times — “disinformation” produced by insurgents to smear government forces. Miquidade claimed that the men in the video were insurgents wearing military uniforms, not actual soldiers. The video surfaced shortly after Amnesty International verified five videos of Mozambican security forces abusing and killing prisoners — videos the Mozambican government also claims were made by insurgents. Defense Minister Jaime Neto repeated the charge regarding the video of the woman’s murder in remarks the following day, accusing “malicious people” of framing soldiers for a crime they did not commit. He claimed to know the identities of some of the people who made the videos, and vowed to “expose” and punish them for “attacking the Mozambican nation.”

These denials, however, were falling apart almost as soon as they appeared. Human rights groups Amnesty International and Human Rights Watch both raised doubts about the government’s explanation and called for an investigation not into the origin of the video but into the murder it depicts. Carta de Mocambique, digging into the video itself, reported that it confirmed the identity of the man who shot the video, a Mozambican soldier who has been deployed to Cabo Delgado. The soldier’s Facebook page indicates that he has died, but Carta could not confirm his death. Carta also spoke to military personnel who confirmed that the other soldiers in the video were their colleagues. A defense ministry official further contradicted Miquidade and Neto’s public stance, telling the Mail and Guardian that the ministry had already identified the soldiers in the video before Neto denied that they were soldiers at all.

A resolution from the European Parliament on 17 September underlines the international stakes of the Mozambican security forces’ claim to be above reproach in its dealings in Cabo Delgado (the domestic political stakes are also high, but difficult to measure given the opacity of the Mozambican political system). The resolution declares that Mozambican security forces have “responded with disproportionate violence, at times in contravention of international human rights commitments” in Cabo Delgado, and “calls on the Government of Mozambique to launch an independent and impartial investigation into torture and other grave violations allegedly committed by its security forces in Cabo Delgado.” The videos of security force abuses, and the condemnations that follow their release, are being noticed at a scale that could make them both a global embarrassment for Mozambique and a stumbling block to future assistance in the conflict.

In response to attacks on Ilha Vamizi, Palma district earlier in the month, Mozambican security forces have deployed roughly 90 troops to the island to  garrison it against further insurgent incursions. Locals report that the arrival of the soldiers means they are not allowed to leave the island, with the last boat leaving for Pemba on 17 September.

The soldiers on Ilha Vamizi are just the latest in a string of redeployments to Palma district, most of which seem focused on protecting the Total liquified natural gas (LNG) project on the Afungi peninsula. The deployments are part of the government’s effort to fulfill its responsibilities in its security agreement with Total, under which it will provide troops for a Joint Task Force to protect the project. Reportedly, the agreement allows Total to renege on the agreement and bring in private security contractors if it is dissatisfied with the troops the government provides. Given both the sovereignty issues involved in having private security forces operating at a large scale under corporate direction — and the money the government would lose if the Task Force dissolved — the clause is a powerful incentive for the government to put as many troops as it can afford at Total’s disposal. These deployments have not improved civilian morale in Palma, however. Sources report that government patrols are largely limited to the area around the Total project, and that, as of 19 September, continued insecurity meant that no goods had entered the town since the 12 September attacks on the road between Palma and Mueda.

After a Mozambican government readout of a 12 September meeting between Mozambican President Filipe Nyusi and Total CEO Patrick Pouyanné made no mention of security issues being discussed, a Total spokesperson told Bloomberg that security was actually “at the core” of the meeting. The clarification from Total, which came a week after the meeting and immediately followed the Mozambican government’s public claims that the recent videos of soldiers committing human rights abuses are insurgent fabrications, emphasized that the leaders discussed the importance of human rights and that “Total unequivocally denounces and condemns all forms of violence.” Mozambican civil society leader Adriano Nuvunga found the attempt to distance Total from the fallout of the videos unpersuasive, saying, “There is no way to dissociate the LNG companies from this situation, as the army is in Cabo Delgado to protect above all the LNG projects.”

Meanwhile, the Mozambican government has offered its estimate for the number of people displaced by violence in the country. The conflict in Cabo Delgado, along with smaller scale violence between the government and the Renamo Military Junta in the center of the country, has displaced around 368,000 Mozambicans, according to the National Institute of Disaster Management. To assist the estimated 300,000 displaced in Mozambique’s northern provinces, the European Union joined other international donors in pledging roughly $29 million to fund the government’s Northern Integrated Development Agency (ADIN).

Finally, Mozambique’s central bank announced that it is continuing to fight money laundering in the country, partially in hopes of disrupting the finances of the Cabo Delgado insurgents. The proposed reforms, which include introducing Unique Bank Identification Numbers, will be welcomed by the international anti-money laundering community, but it is unclear how much of an effect they will have on the Cabo Delgado conflict. There have been no indications that the government has been able to identify insurgent funding streams in the banking system, while the insurgents themselves have been able to access cash by robbing banks during raids. 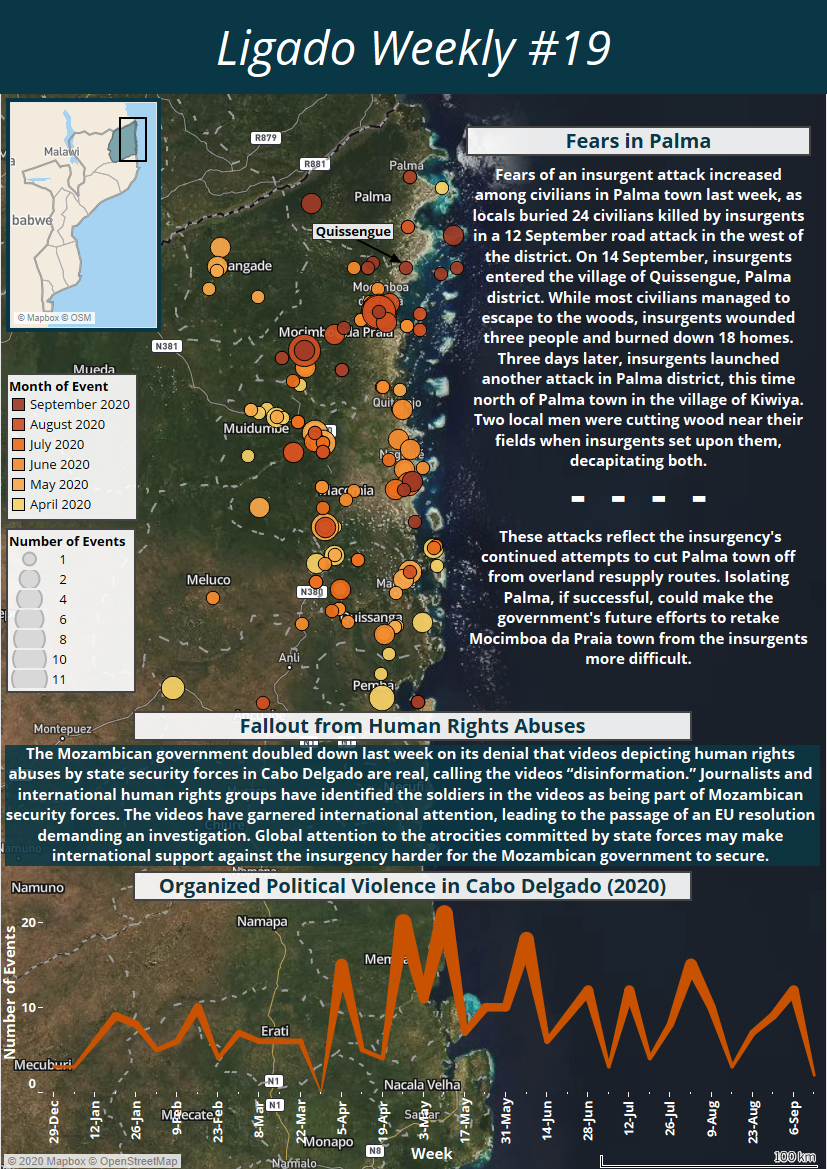