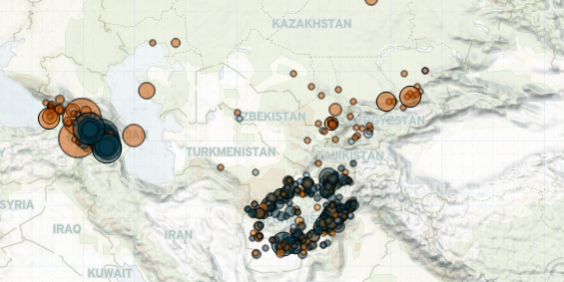 In Afghanistan, despite the ongoing intra-Afghan talks in Qatar, the level of violence between Afghan forces and Taliban militants remained at a similar level to the week prior. In one of the deadliest attacks last week, an airstrike by Afghan forces reportedly killed over 10 civilians in Khan Abad district of Kunduz; the Afghan Ministry of Defense claimed that they targeted and killed at least 30 Taliban insurgents during these airstrikes (Washington Post, 20 September 2020). Besides Kunduz, the most lethal clashes took place in Nangarhar, where the Taliban was supported by the Red Unit (its version of special forces). A high number of casualties were inflicted on both parties during these clashes; Afghan forces reported killing a Red Unit commander in Surobi district of Kabul. Moreover, the targeted killing of civilians continued, as a university professor in Nangarhar, a provincial council member in Paktia, and a former senator in Badghis were all shot by unidentified assailants.

Amid the ongoing violence, President Ashraf Ghani renewed his calls for a ceasefire, but the Taliban rejected the call and reiterated the group’s demand for an Islamic system of governance in the country (TOLO News, 16 September 2020; Voice of Jihad, 19 September 2020). The issue remains to be solved during the peace talks in Doha, which are reportedly advancing in an “environment of deep mistrust” between both parties (New York Times, 19 September 2020).

In Kazakhstan, nationwide protests were organized last week, led by the oppositional Democratic Party of Kazakhstan. Protesters gathered in Nur-Sultan, Almaty, Aktobe, Semey, Shymkent, and Karaganda. They demanded political reforms ensuring freedom of expression. Protesters also asked for limitations on foreigners’ property rights to control the rise of Chinese investment in the country. During the same time period last year, a series of similar anti-Chinese protests broke out in different cities over purported plans to move 55 factories from China to Kazakhstan. This year, the demonstrations took place in a similar period, but protesters emphasized the ongoing political oppression more than anti-Chinese sentiments.

In Kyrgyzstan, as parliamentary elections, scheduled for 4 October, approach, a large brawl broke out in Aravan village of Osh region between the supporters of two political parties. The fight reportedly started after a candidate from the Mekenim Kyrgyzstan party insulted his rival in a speech. The fight resulted in 12 people being hospitalized and the head of police in Aravan being dismissed due to ineffective police intervention (RFE/RL, 20 September 2020).

Similarly, in Georgia, ahead of the parliamentary elections scheduled for 31 October, two opposition candidates were attacked by unknown groups in Tbilisi and Dmanisi. Moreover, there was an increase in protest events in Georgia last week, partially due to parents and teachers protesting the postponement of the school year in big cities due to a recent surge in coronavirus infections.

Finally, along the Armenia–Azerbaijan border, ceasefire violations resulted in casualties for the first time in six weeks, on the Tavush-Tovuz part of the Line of Contact (LoC). On 13 September, Azerbaijan’s Ministry of Defence (MoD) reported that a soldier was wounded by gunfire from the Armenian side. A few days later, the Armenian MoD reported the killing of a soldier by Azerbaijani fire. Tensions continue to rise this week, as another Azerbaijani soldier was killed on 21 September.1This event will be published next week, in line with ACLED’s data publication schedule.