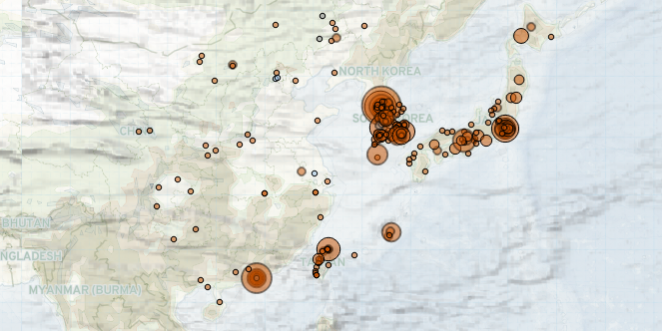 Last week, demonstration activity slightly increased across East Asia. China implemented tougher crackdown measures on school boycotts in Inner Mongolia and other regions. Meanwhile, in Mongolia, there were protests opposing the Chinese Foreign Minister’s visit to Ulaanbaatar. There was a decline in protests in Hong Kong, with the majority of events focused on coronavirus-related issues. In Japan, there was an increase in demonstrations opposing a Security Bill which allows the military to operate abroad in collective self-defense missions. Meanwhile, small business owners and delivery workers protested in South Korea amidst the coronavirus crisis.

In China, following a series of demonstrations that broke out in Inner Mongolia in late August against the policy to replace Mongolian for Chinese as the language of instruction in schools for certain subjects, 4,000 to 5,000 individuals — including students, parents, community leaders, and activists — have been held in some form of police custody over the past three weeks (SMHRIC, 14 September 2020). Tougher measures have also been introduced by authorities across the region in order to improve the attendance rate at schools. In Horqin District, warnings were issued by authorities, stating that parents who refuse to send their children to school will be sent to legal education training to learn Chinese law and will be issued a fine and pursued for legal responsibilities. Officials, teachers, and schools have also come under enormous pressure to improve attendance rates as class boycotts extend into their third week: in one county, schools were required to achieve 100 percent attendance by 16 September or face serious repercussions, including the barring of teachers from promotion (Apple Daily, 15 September 2020).

Similar education policies have also been enacted in the new semester that began in September in other regions in China populated by ethnic minorities. Authorities have implemented measures to prevent similar mass demonstrations in these regions. In Yanbian Korean Autonomous Prefecture, Jilin province, there has been significant police presence following the introduction of Chinese-teaching medium in schools that previously offered classes in Korean. In Tibetan areas of Qinghai province, a protest staged by Tibetan parents was quickly suppressed by police, with one protester taken into custody. The protest was prompted by the closure of local primary schools in an effort to force Tibetan parents to send their children to government-run boarding schools (RFA, 12 September 2020). In Mongolia, about 100 people and local NGOs protested in Ulaanbaatar against the Chinese Foreign Minister’s visit to Mongolia amidst accusations that China is suppressing the Mongolian language and culture in China’s Inner Mongolian Autonomous Region (Reuters, 15 September 2020).

In Hong Kong, following the major demonstration on 6 September against the one-year postponement of the Legislative Council election, protest activity quieted down last week, with the majority of demonstrations focused on coronavirus-related issues. In addition, supporters gathered on two separate days in support of pro-democracy activists appearing in court for charges related to unauthorized assembly. The charges stem from their involvement in organizing a number of the anti-extradition bill demonstrations last year, and from the 4 June candlelight vigil earlier this year to commemorate the 1989 Tiananmen Square protests.

In Japan, protests increased around issues related to national security. Last week, protests against the 2015 Security Bill — which allows the Japanese Defence Forces to operate overseas and to provide military assistance to allies, such as the US, even if Japan is not threatened — were held nationwide as the day marked exactly five years since the bill was enacted. The enactment of the bill was considered controversial by many as it marks Japan’s detachment from the pacifist doctrine that has governed the country since the end of the Second World War (The Japan Times, 19 September 2015). The rising anti-military sentiment is likely due to the renewed proposal to acquire new destroyers, specializing in missile defense, submitted last month to the Prime Minister by a faction within the ruling party. This further fuels the public perception that the new Prime Minister will continue Prime Minister Abe’s controversial policies on security, which some think will drag Japan into a future war (Kyodo News, 17 September 2020). The plan to acquire missile-intercept capability has been pushed back several times in parliament, most recently earlier this year, when the cabinet also halted the missile defense system Aegis Ashore project.

Finally, in South Korea, owners of small businesses, ranging from karaoke rooms and PC cafes to the adult entertainment industry, protested against the government’s handling of coronavirus relief payments and ongoing restrictions on business operations. While relief was denied to adult entertainment facilities, many business owners within this industry did not agree with their exclusion from the relief payment structure and insisted that the government should allow them to open their business for normal operation while abiding by quarantine rules (The Korea Times, 14 September 2020). This follows a series of protests since the beginning of the pandemic staged by business owners of facilities prone to infection outbreaks. Although the Korean government lowered its social distancing requirements and allowed many businesses to reopen, it did not allow for businesses deemed ‘high-risk’ — such as karaoke rooms and entertainment spots — to reopen, causing operating losses for these industries.

Meanwhile, the Korean Confederation of Trade Unions (KCTU) organized simultaneous nationwide demonstrations to bring awareness to the burden on parcel delivery workers during the coronavirus pandemic. This development follows the delivery industry’s demonstrations throughout the summer, as the pandemic increased the workload of delivery workers to dangerous levels, which led to twelve workplace deaths, attributed to overwork, since the beginning of the outbreak (The Korea Herald, 17 September 2020).