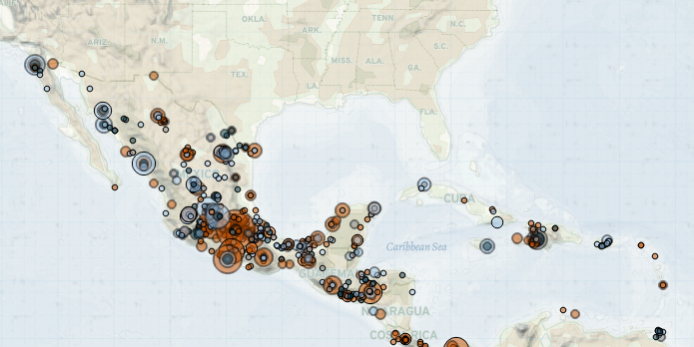 Last week, demonstrations remained high in Mexico, Central America, and the Caribbean. Despite the sharp decrease in coronavirus-related demonstrations in the region in recent weeks, in Saint-Martin and Sint-Maarten, demonstrators from both sides of the islands called for the reopening of the border. In Haiti, the arrest of a police officer continued to trigger unrest with hundreds of Phantom 509 police officers rioting in Port-au-Prince. Meanwhile, highschool students in Haiti continued to demonstrate over the lack of teaching staff in schools due to a month-long teachers’ strike over low salaries and poor labor conditions. In Costa Rica, the proposals of bills affecting labor rights sparked nationwide mobilization, while in Mexico and Nicaragua, demonstrations against femicide continued to be reported. In Nicaragua, state forces and pro-government militias continue to target civilians and activists with attacks and arbitrary detentions.

With the progressive lifting of coronavirus lockdown measures across the region, demonstrations directly related to the pandemic continued to represent less than 10% of all demonstrations. In Saint-Martin and Sint-Maarten, hundreds of residents demonstrated at the border separating the island to demand its reopening. The French side of the island has been closed since 31 July as part of measures to prevent the spread of the coronavirus. The measure has had a significant impact on the daily life of residents who are used to crossing the  border to go to work or to school (France info, 4 September 2020). As a result of the demonstration, the border was reopened.

In Haiti, members of the Phantom 509 police faction continued to demonstrate.  The Phantom 509 is a self-denominated group of special forces officers; it was formed around labor demands and allegedly aims to overthrow the current government. The group demonstrated over the arrest of Jean-Pascal Alexandre in May on charges of murder, vandalism, destruction of public property, and undermining state security. Demonstrators condemned the arrest of their colleague, which they consider to be arbitrary, and demanded his release. Hundreds of men on motorcycles drove through Port-au-Prince and intimidated local residents, setting cars belonging to the state on fire. The Phantom 509 group is composed of police officers and made headlines in April 2020 during violent demonstrations against poor labor conditions and the low salary of police forces (Haiti Liberté, 29 April 2020). On 12 September, they obtained the release of five agents of the Departmental Unit of Law Enforcement (UDMO) following demonstrations using similar violence (Rezonodwes, 12 September 2020). The activities of the group have raised concerns among officials. Earlier this year, the Minister of Justice referred to Phantom 509 as a terrorist and criminal organization, while the Inspector General of the National Police of Haiti (IGPNH) announced an investigation to identify its members (Haiti Libre, 11 June 2020; Haiti Libre, 19 September 2020). Members of Phantom 509 have held the current government responsible for the political crisis in Haiti and have been trying to destabilize the current administration (Presslakay, 15 September 2020).

Meanwhile, the absence of teaching staff and the disruption of classes continued to spark unrest among highschool students in Haiti. Teachers have been on strike for over a month to obtain a salary increase and improved labor conditions, forcing many public schools to close (Le Nouvelliste, 10 September 2020). In Gonaives, public highschool students threatened to disrupt activities in private schools — where classes have not been suspended — which resulted in a dozen students injured after a clash between public and private school students.

In Costa Rica, nationwide demonstrations were reported as unions protested against proposed laws that would impact labor rights. Some of the bills set provisions to cancel yearly bonuses for public sector workers and to reduce workday hours, which in turn negatively affect salaries. These proposals come as negotiations between Costa Rica and the International Monetary Fund (IMF) continue: Costa Rica has asked for a $1.75 billion loan in order to stabilize its economy that was affected by the coronavirus pandemic. The demonstrations also took place nearly two years after a major cross-sector strike against President Quesada’s fiscal plan and cuts in public spending (France 24, 22 September 2018).

In Mexico, inaction and the downplaying of gender-based violence by Mexican institutions continued to trigger nationwide demonstrations last week. Demonstrators symbolically took over the offices of the National Commission of Human Rights (CNDH), with acts of vandalism reported in the states of Baja California, Chihuahua, DF, Oaxaca, Sonora, and Tlaxcala. This wave of demonstrations comes after several public statements by the Mexican president who criticized the vandalizing of a painting and repeatedly minimized the severity of gender-based violence in Mexico (Sin Embargo, 7 September 2020).

Similarly in Nicaragua, members of civil society and feminist groups picketed against femicide following the raping and killing of two teenagers in Mulukuku. The police rapidly dispersed the protest, arresting five demonstrators. Following widespread demonstrations against governmental policies in 2018, the regime of Daniel Ortega has outlawed anti-government demonstrations and has increased restrictions on freedom of association and political discrimination (Human Rights Watch, 2020). In addition, pro-government militias attacked an alleged political opponent and his family in Leon. As well, law enforcement forced members of the Civic Alliance for Justice and Democracy – a coalition of human right activists, peasant movement, and organizations promoting democracy – to remain in their houses.