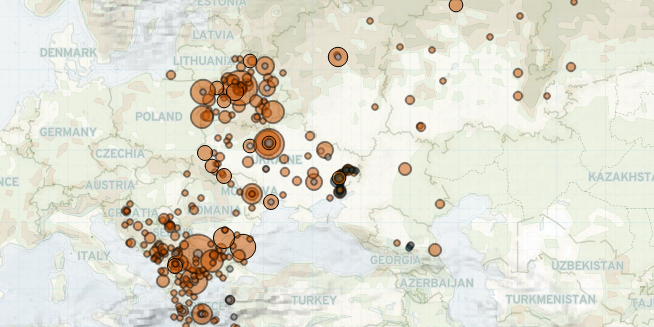 Last week, demonstration activity across Eastern Europe decreased. In Belarus, large demonstrations against the regime of Alexander Lukashenko continued. In Ukraine, ceasefire violations continued, though the violations have been minimal since the recent 22 July ceasefire agreement.

In Russia, there was a minor uptick in demonstrations due to recent regional elections and solidarity demonstrations. These solidarity demonstrations included those in support of the Khabarovsk demonstration movement, Belarusian demonstrators against oppression by Alexander Lukashenko’s regime, and the poisoned Russian opposition activist Alexei Navalny, who has been a vocal figure in the fight against corruption in Russia. Demonstrations in the city of Khabarovsk continued into their 11th week (RBC, 19 September 2020). The protests are nominally in support of the former governor Sergei Furgal, who his supporters believe has been targeted for political persecution, but have taken on distinct anti-regime overtones and have become a broader social phenomenon that serves as an outlet for dissatisfaction with the government of Vladimir Putin.

In Romania, hundreds of people demonstrated in Bucharest and five other cities against the mandatory wearing of face masks in schools and against limits imposed on public gatherings, such as demonstrations (Agerpres, 19 September 2020). These demonstrations are taking place despite generally loosening coronavirus restrictions in the country and serve as a platform for politically fringe beliefs.

In the Donbas region of Ukraine, almost two months after the most recent ceasefire agreement, fighting between Ukrainian government forces and Russian-led separatists continued at very low levels, similar to the week prior. This is likely due to a potentially short-term shift in Russian foreign policy priorities away from Ukraine and towards other countries in Eastern Europe, such as Belarus. There were 11 armed clashes and 17 shelling incidents last week with no fatalities reported.