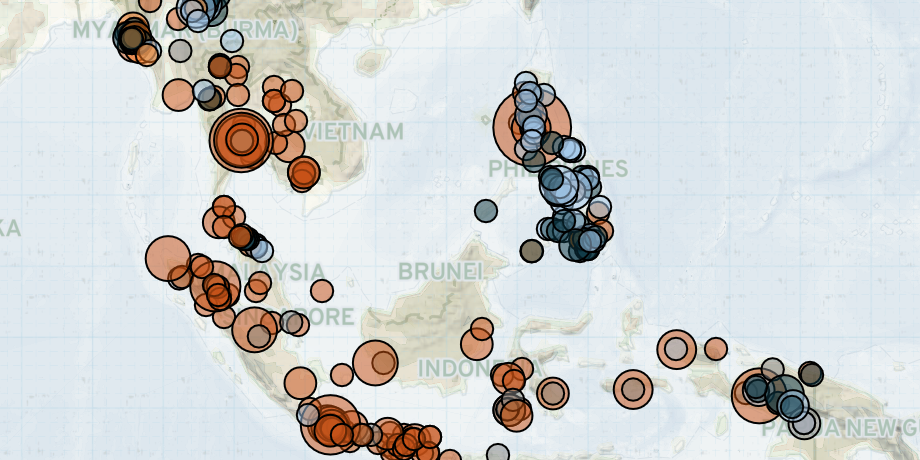 Last week in Southeast Asia, fighting continued between state forces and ethnic armed organizations (EAOs) in Myanmar. Islamist violence and increased killings of drug suspects were reported in the Philippines. In Indonesia, lethal attacks on civilians and military officers by rebel groups were reported in Papua province. Meanwhile, anti-government demonstrators in Thailand gathered for the largest demonstration since the 2014 coup d’état.

In Myanmar, fighting continued unabated in both Shan and Rakhine states. Clashes between the military and members of the Northern Alliance — which comprises the Kachin Independence Organization/Kachin Independence Army (KIO/KIA), the Myanmar National Truth and Justice Party/Myanmar National Democratic Alliance Army (MNTJP/MNDAA), the United League of Arakan/Arakan Army (ULA/AA), and the Palaung State Liberation Front/Ta’ang National Liberation Army (PSLF/TNLA) — were reported in northern Shan state. In Muse township alone, the KIO/KIA and the military clashed repeatedly over three consecutive days, partly in response to the increased presence of military troops in the area.

Meanwhile, in Rakhine state, amid ongoing fighting between the ULA/AA and the military, the military has also been shelling villages along the Mayu and Kaladan rivers, resulting in civilian casualties. The arrival of military troops in Myebon township also resulted in at least 2,400 villagers fleeing their homes (Narinjara News, 15 September 2020). It is estimated that in this month alone, the fighting in Rakhine has displaced at least 17,000 people (Radio Free Asia, 19 September 2020), even as the country records hundreds of new coronavirus cases on a daily basis (Reuters, 18 September 2020). While the ULA/AA and the military have been accusing each other of using the pandemic for political and military gain (Irrawaddy, 7 September 2020), the United Nations has urged the government to heed the call for a global ceasefire and “immediately” extend its unilateral ceasefire to include the entire country (Anadolu Agency, 16 September 2020). The current ceasefire does not include Rakhine and Chin states.

In the Philippines, deadly clashes between state forces and the Bangsamoro Islamic Freedom Fighters (BIFF) were reported in Mindanao, where violence between two hostile factions of the Moro Islamic Liberation Front (MILF) also resulted in fatalities. Meanwhile, after a relative lull in drug-related violence the week prior, at least eight drug suspects were killed by police forces during raids last week. While President Rodrigo Duterte has denied authorizing the extrajudicial killings of drug suspects, his rhetoric on the “war on drugs” has been criticized for emboldening state forces and vigilantes alike to kill drug suspects (BBC, 4 June 2020). Earlier this month, in what is considered to be one of his most explicit threats yet, the president publicly ordered the country’s head of customs to “shoot and kill” those found with drugs during a televised cabinet meeting (Associated Press, 1 September 2020).

Meanwhile, in Papua province in Indonesia, the West Papua National Liberation Army (TPNPB) killed at least five people last week, including military officers and civilians whom they suspected to be military personnel in disguise. Tensions in Papua have increased alongside calls for a referendum of self-determination since the Indonesian government expressed its desire to renew the region’s special autonomy status, which is due to expire in November 2021 (Jakarta Globe, 12 March 2020; The Jakarta Post, 7 July 2020). The Indonesian military attributed last week’s increase in violence by the TPNPB as the group’s attempt to “attract public attention” ahead of the United Nations General Assembly scheduled for the end of this month (22 to 29 September), which President Joko Widodo is attending (The Jakarta Post, 21 September 2020).

Finally, in Thailand, between 30,000 to 100,000 anti-government demonstrators marched from Thammasat University to Sanam Luang (Royal Field) in Bangkok on 19 September, the 14th anniversary of the 2006 coup d’état (Bangkok Post, 19 September 2020). While fears and rumors about violence breaking out during the rally had been circulating alongside rumors of another coup in the weeks leading up to the rally, the largest demonstration in the country since the 2014 coup proceeded peacefully over the weekend. Nonetheless, ahead of the demonstration, several incidents of intimidation and harassment by authorities were reported, such as police seizing 50,000 copies of a “10-point manifesto” proposing that the monarchy be reformed based on democratic principles (Bangkok Post, 19 September 2020), and threatening companies that had been hired by protesters to provide services during the rally (Prachatai, 19 September 2020). Police and military personnel were also on stand by and cordoned off access to the Government House and the Royal Palace as the demonstration took place.

After camping out overnight, protesters installed a plaque, which claimed “the country belongs to the people, not to the monarchy,” in Sanam Luang as a symbolic gesture. The plaque, which was removed within a day (Thai PBS World, 21 September 2020), also alluded to the revolution of 1932 that transformed Thailand from an absolute monarchy to a constitutional monarchy (Khaosod, 20 September 2020). Protesters have announced plans to hold another demonstration on 24 September, when parliament convenes to decide on a motion to set up a constitution-drafting committee (Bangkok Post, 13 September 2020).

Fiona Wong is a Methodology Coordinator at ACLED. She holds an MA in Human Rights and Democratisation, and her past research includes work with public policy think tanks and international human rights organizations. Fiona has also worked with human rights defenders across Asia and the Pacific.
24 September 2020
Share
TweetShare on Twitter Share on FacebookShare on Facebook Share on LinkedInShare on LinkedIn