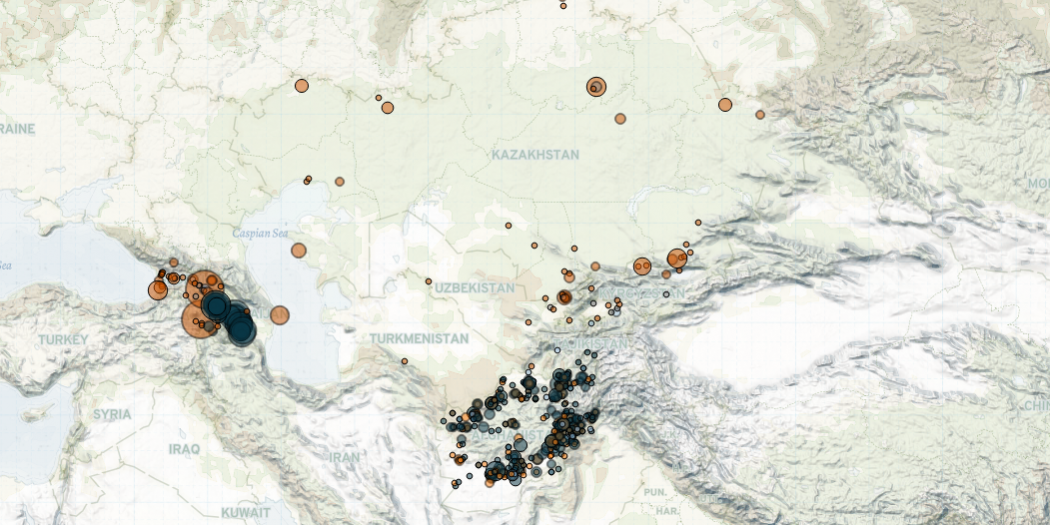 Last week in Central Asia and the Caucasus, continued violence in Afghanistan ruled out the possibility of a ceasefire deal being reached at the ongoing peace talks. In Kazakhstan, opposition protests continued. In Kyrgyzstan and Tajikistan, approaching elections resulted in further violence and unrest. The most critical development of the week was the sudden spike in clashes in the disputed Nagorno-Karabakh region, resulting in dozens of military and civilian casualties and sparking fears that the long-frozen conflict could turn to war.

In Afghanistan, violence remained at high levels as the Taliban and the Afghan government continue to hold peace talks in Doha, Qatar. Lethal clashes took place in Waza Khwa district of Paktika where 65 Taliban members were killed by Afghan forces. Clashes also took place in Gizab district of Urozgan for several consecutive days with at least 60 Afghan forces killed by Taliban, including over two dozen policemen who were executed after surrendering their arms to the group. Further, the Taliban conducted offensives against Afghan forces in 28 provinces as the Afghan military ramped up its airstrikes and carried out large-scale demining operations in Kandahar. Meanwhile, the Taliban’s insistence on a new Islamic political system further stalled peace talks in Doha, Qatar and decreased hopes for a ceasefire in the short-term (RFE/RL, 26 September 2020).

In a separate development, Afghan Special Forces killed four Islamic State (IS) militants in Jalalabad city of Nangarhar. Amongst those killed was an organizer of assassinations targeting religious scholars and government workers; such assassinations have been on the rise throughout 2020. A similar operation targeting key IS members was last conducted in early August.

In Kazakhstan, opposition protests continued, led by the banned oppositional Democratic Choice party. Authorities attempted to control the size of rallies by blocking streets and some squares where protesters planned to meet. Despite this, in Nur-Sultan, Almaty, and Uralsk, demonstrations took place demanding the resignation of the government, restrictions to land lease transactions of foreign businesses, and anti-corruption reforms.

In Kyrgyzstan, the approaching parliamentary elections of 4 October triggered further violence last week. After the mass brawl of the previous week involving the Mekenim Kyrgyzstan Party, a frontrunner in the elections, a campaigner from Naryn region claimed that supporters of the same party attacked him. Party officials denied the accusations. In another development, the Green Party of Kyrgyzstan demonstrated in Bishkek city and called for voting against all candidates, claiming violations in the electoral process. They also criticized the “Form No. 2”, which enables voting in any polling district. The form has long been controversial as political parties reportedly paid people to vote in particular districts in order to influence the outcome of elections (RFE/RL, 26 September 2020). Another opposition protest took place in Bishkek on 27 September against the remarks of a leader from another frontrunner party, the Birimdik party. In a video that surfaced online last week, the leader reportedly implies that Kyrgyzstan ought to both abandon independence and join a stronger Russia-led Union. These developments further complicate the elections, the results of which may be dependent upon such scandals.

Meanwhile, in Tajikistan, where presidential elections are set for 11 October, the leader of an opposition party, the Social Democratic Party of Tajikistan (SDPT), was beaten by unknown assailants in Dushanbe. The politician claimed that it was not the first time that he has been attacked by unknown people. Such attacks on opposition candidates are not uncommon in authoritarian Tajikistan. Another potential candidate reported that he was detained and questioned by the State Committee for National Security after he announced his interest in running for election. This comes following the wave of arrests in August targeting other opposition figures (Eurasianet, 18 August 2020).

In the Caucasus, ongoing tensions in the Nagorno-Karabakh region escalated into an active battle on 27 September, as authorities from the Republic of Artsakh reported heavy missile attacks by Azerbaijani forces targeting military and civilian positions, including in the de facto Artsakh capital of Stepanakert (Ministry Defence of Artsakh, 27 September 2020). The Ministry of Defence (MoD) of Azerbaijan claimed that it was responding to shelling from the Armenian side (Oxu.az, 27 September 2020). Amid the intense armed engagements, Artsakh authorities reported over 80 military deaths. Azerbaijan reported civilian fatalities, but did not reveal information on military casualties. Armenia also reported material losses in civilian areas due to Azerbaijani drone strikes on border towns (BBC, 29 September 2020).1 These events will be published next week, in line with ACLED’s data publication schedule. The long-simmering conflict has seen tensions rise in recent months, particularly following the July 2020 clashes that resulted in dozens of casualties over the course of several days. Both the Armenian and Azerbaijani governments are known to exercise a high degree of control over domestic media and take nationalist stances on the conflict to strengthen their internal position, especially amid the economic hardship caused by the coronavirus crisis (Foreign Policy, 28 September 2020). Clashes have continued into this week.

Asena Karacalti is the South Asia Assistant Research Manager at ACLED, mainly overseeing the Afghanistan dataset.She holds a BA in Law, and an MSc in Cultural Anthropology and Development Studies from KU Leuven, Belgium. Her research interests focus on the transit experiences of migrant and refugee populations and political violence across the Middle East and North Africa. She has past experience as a lawyer and as an expert in migration and asylum organizations.She has previously worked as the Central Asia & the Caucasus, and Africa Research Manager at ACLED.
Vardan Ghaplanyan

Vardan Ghaplanyan is an Armenia-Azerbaijan Researcher at ACLED. He has a PhD in International relations and history focusing on regional conflicts in the Caucasus. His research interests include international history, conflict, and political developments in the Caucasus and neighboring countries.
1 October 2020
Share
TweetShare on Twitter Share on FacebookShare on Facebook Share on LinkedInShare on LinkedIn