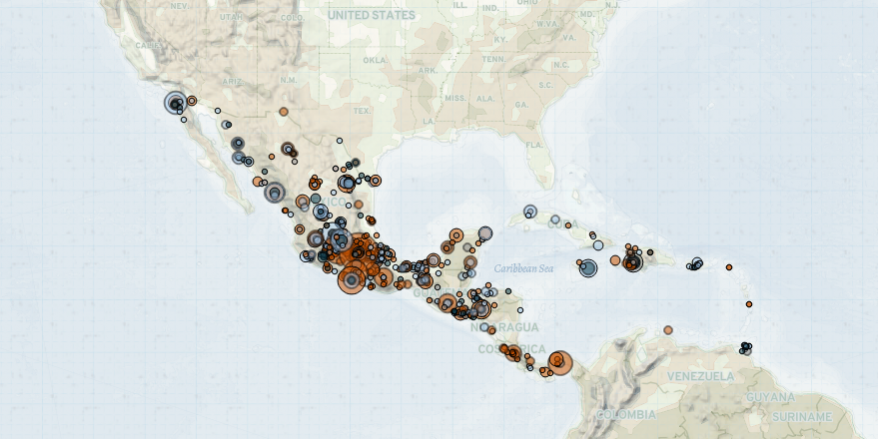 Last week, the number of demonstration events remained high in Mexico, Central America, and the Caribbean. In Costa Rica, people demonstrated against the rise of taxes and austerity policies, while in El Salvador, war veterans demanded the payment of their pensions. In Panama, demonstrations over job losses were reported. In Mexico, teachers blocked train tracks in a demonstration calling for automatic job placements for graduates of Normal schools, which train high school graduates to become teachers. Students in Mexico demonstrated and demanded justice on the anniversary of the disappearance of 43 Normal students of Ayotzinapa. In Nicaragua, the persecution of members of the political opposition continued with the arrest of 30 activists. In Jamaica, clashes between armed groups, potentially gangs, and police forces claimed the lives of two officers amid rising attacks targeting members of police forces and reignited gang disputes.

As most governments in the region continue to move forward with their plans of reopening businesses despite the ongoing coronavirus pandemic, the number of demonstrations directly related to the pandemic has dropped, though those indirectly related to the pandemic continue. Instead, demonstrations have been focused on other socio-economic concerns. In Costa Rica, people continued to demonstrate against  tax reforms proposed by the government as part of on-going negotiations with the International Monetary Fund (IMF) over a financial aid package to stimulate the Costa Rican economy. The reforms bring about tax increases and austerity measures as the population strives to recover from the closing of business during the coronavirus pandemic and its toll on the tourism industry (Al Jazeera, 18 September 2020).

In El Salvador, veterans from the 1980-1992 civil war demonstrated over the delayed payment of pensions. The Veterans Law, adopted in 2015, set provisions for the payment of a monthly pension, medical attention, and other benefits to ex-combatants of the armed forces and of the former guerrilla group Farabundo Marti National Liberal Front (FMLN). Earlier in September, opposition deputies affiliated with the Nationalist Republican Alliance and the FMLN approved the allocation of USD 52 million to pay pensions owed to veterans. The decision was contested by President Nayib Bukele who declared the decree unconstitutional and illegal, which sparked anger among veterans (The San Diego Union Tribune, 10 September 2020).

In Panama, amid predictions of an unprecedented job crisis and a rising unemployment rate, several labor groups demonstrated in front of national and local government institutions, requesting additional job opportunities. Coronavirus lockdown measures have impacted the labor market with significant job losses registered in the leisure and tourism industry as well as in the trade, transportation, and utilities sectors (Mena FM, 9 August 2020; WJHG, 24 September 2020).

In Mexico, widespread demonstrations of teachers were reported, especially in the state of Michoacan. Members of the National Coordination of Education Workers (CNTE), one of the most powerful teachers’ unions in Mexico, coordinated several demonstrations and the blocking of train tracks to demand teaching job positions be guaranteed for graduates of Normal schools, a network of educational institutions training high school graduates to become teachers. The Secretary of Public Education announced the vacancy of 45,000 teaching positions for over 160,000 applicants in 2020 (Mexico News Daily, 12 August 2020). Although President Andrés Manuel López Obrador scrapped his predecessor’s education reforms, which established teachers evaluations, the CNTE has continued to demand automatic job placements for graduates.

Further, demonstrations demanding justice for the disappearance of 43 Normal school students in Ayotzinapa took place across Mexico, six years after the mass kidnapping in Iguala de la Independencia. The majority of demonstrations were recorded in the state of Guerrero where the forced disappearance took place. In Iguala de la Independencia, a group of demonstrators entered the justice palace, throwing Molotov cocktails and burning a vehicle. They demanded the release of security camera videos where the kidnapping was allegedly recorded — which went missing during the investigation of the case. To date, the body of the missing students – who were on their way to protests against  education reforms and calls for the hiring of teachers – have still not been found. Investigations have revealed the involvement of corrupt government representatives and police forces in the killing of the students, in collaboration with members of the Guerrero Unidos gang (BBC, 19 September 2019).

In Nicaragua, the government continues to persecute political opposition and to restrict freedom of assembly. Last week, police besieged the offices of feminist organizations and forced their members to stay inside. Activists have described this as an act of intimidation ahead of the adoption of the so-called Regulation of Foreign Agent bill, proposed by the Sandinista National Liberation Front (La Prensa, 27 September 2020; Confidencial, 25 September 2020). The law provides for the registration of organizations receiving foreign funds at the Ministry of Interior and forces them to undergo financial controls (DW, 29 September 2020). The bill is viewed as a move to legalize repression of civil society activities. Feminist organizations have been long-standing opponents to the regime of Daniel Ortega since the adoption of an abortion ban in 2006, and after organizations supported the accusations of sexual abuse held against Daniel Ortega by his step-daughter. In addition, several police operations led to the detention of over 30 members of the National Coalition, formed from the merger of the National Unit Blue and White (UNAB) and the Civic Alliance. Both groups emerged in 2018 during social unrest and anti-government demonstrations. The merger occurred earlier this year ahead of the 2021 Presidential election in an attempt to end Daniel Ortega’s rule (The Associated Press, 17 January 2020).

Finally, in Jamaica, clashes between unidentified armed groups and police and military officers led to the killing of a soldier of the Jamaica Defence Force during a drug bust, and the killing of a police officer who was on patrol in Kingston. The High Command of the Jamaican police force announced they were on high alert following a surge of targeted attacks against police officers against the backdrop of a reignited war in certain areas of Kingston between gangs (Jamaica Gleaner, 20 September 2020; Jamaica Observer, 9 September 2020).