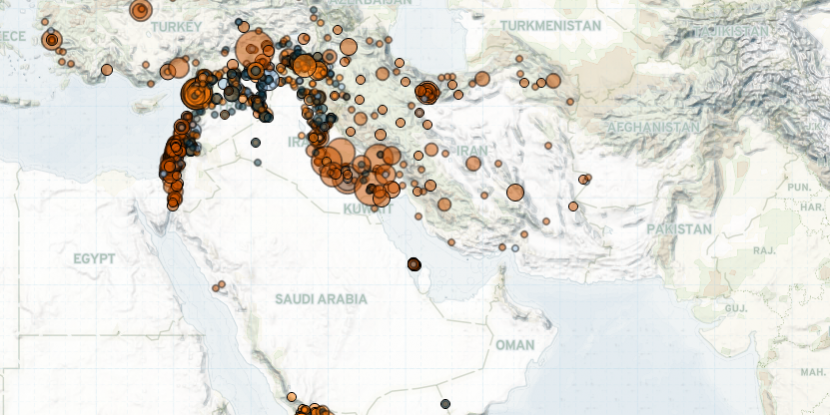 Last week in the Middle East, the United States (US) threatened to close its embassy in Baghdad in response to continuous attacks by militias in Iraq on US and global coalition targets. Fatah and Hamas have agreed to hold joint elections in the West Bank and Gaza. Lebanon is once again facing a political vacuum as Prime Minister (PM) designate Mustafa Adib resigned after he failed to form a government. In Syria, heavy clashes were reported between the Islamic State (IS) and Iranian-backed militias.

In Iraq, on 26 September, the US threatened to shut down the embassy in Baghdad if the Iraqi government did not take punitive measures against militias in the country — reportedly affiliated with Iran — that have been targeting foreign missions and troops. Besides closing the embassy, the US threatened to target all of the militias involved in attacks against them (Al-Monitor, 28 September 2020). This comes in response to a string of attacks that started following the killing of Iranian General Qassim Soleimani at the beginning of the year, and have only intensified since July. This intensification followed increased pressure placed on them by PM Mustafa Al Kazimi, who has tried to target their funding structures and threatened to arrest a number of militia leaders (Washington Post, 28 September 2020). The closing of the embassy and the targeting of militias by the US would cause a dangerous security situation in Iraq.

Protests in Israel against PM Benjamin Netanyahu more than doubled in number last week, even after a very strict lockdown was imposed following a significant increase in coronavirus infections. After the signing of the normalization agreements between the United Arab Emirates (UAE), Bahrain, and Israel, delegations from Fatah and Hamas held a number of meetings aimed at unifying Palestinian leadership. These meetings have led to a breakthrough as both Fatah and Hamas have agreed to hold a joint election in the West Bank and Gaza (Al Jazeera, 24 September 2020).

In Lebanon, the newly appointed PM-designate Mustafa Adib has resigned from his position after he was unable to form a new government, further complicating the political and economic situation (BBC News, 26 September 2020). On the security front, armed clashes broke out in northern Lebanon on the border with Syria between reported IS members and Lebanese military forces, which left 13 militants dead (Xinhua, 27 September 2020).

In northwest Syria, clashes took place along frontlines in Idleb and Hama. Regime and allied forces clashed with opposition and Islamist factions with no change in territorial control. Elsewhere, a vehicle-borne improvised explosive device (VBIED) went off in Tal Halaf in Al Hasakeh in the Peace Spring area, killing four civilians and wounding 11 others.

In southern Syria, attacks by unidentified gunmen continued against regime military personnel and civilians alike. In Dar’a, five civilians were killed in these attacks. Anti-regime demonstrations also took place in Dar’a city and Hrak town, denouncing regime policies and violations in the south.

In eastern Syria, regime forces, backed by Russian air support, clashed with IS in Ar-Raqqa province, while in Deir-ez-Zor desert, IS ambushed a pro-Iran militia convoy of 13 vehicles. Heavy clashes ensued.

In Yemen, fighting between Houthi and anti-Houthi forces was reported in Ad Dali, Al Bayda, Al Hodeidah, Al Jawf, Marib, and Sanaa governorates. The Houthi advance on Marib city was halted and partially repelled in northern and southern Marib, with pro-Hadi and affiliated forces claiming to have regained some territory previously lost in Houthi offensives. Notably, clashes in Al Hodeidah reportedly intensified, with both sides blaming the other for the onset of clashes. No changes to territory were reported (Xinhua Net, 24 September 2020). The clashes in Al Hodeidah come amid decreased support from anti-Houthi forces for the Stockholm Agreement, which froze the frontlines in Al Hodeidah. Houthi forces have continued to advance elsewhere in Yemen (Debriefer, 12 September 2020). However, on 27 September, pro-Hadi and Houthi representatives agreed to a prisoner exchange deal during UN-sponsored negotiations in Switzerland. The agreement specifies 400 people held by Houthi forces will be released, including four people from Sudan and fifteen from Saudi Arabia, in exchange for 681 Houthi fighters (Al Jazeera, 27 September 2020). This deal represents a confidence-building measure, should it be successfully implemented. Previous agreements have not been fully implemented.

Clashes between pro-Southern Transitional Council (STC) forces and forces of the internationally-recognized Hadi government reignited in Abyan governorate after a lull during the two previous weeks. In the second recorded instance in September 2020, pro-Hadi forces were reportedly injured and killed by a drone strike by suspected pro-STC or UAE forces (Debriefer, 27 September 2020). Additionally, Al Mukalla City, capital of Hadramawt governorate, experienced three consecutive nights of rioting against the government’s inability to provide basic services (Middle East Monitor, 23 September 2020). A similar riot occurred in the Al Mansura district of Aden, while others peacefully protested inadequate governance in Aden and Hadramawt governorates.

Finally, in Saudi Arabia, no attacks by Houthi forces were reported in the past week. The last time such a lull occurred was last month. However, Houthi forces shelled the base of the 1st War Battalion of the Yemeni military on the border of Saudi Arabia and Sadah governorate, killing eight soldiers and injuring dozens more, among them a Saudi soldier. The Saudi-led coalition continued to conduct airstrikes throughout Yemen, including in Sanaa city.