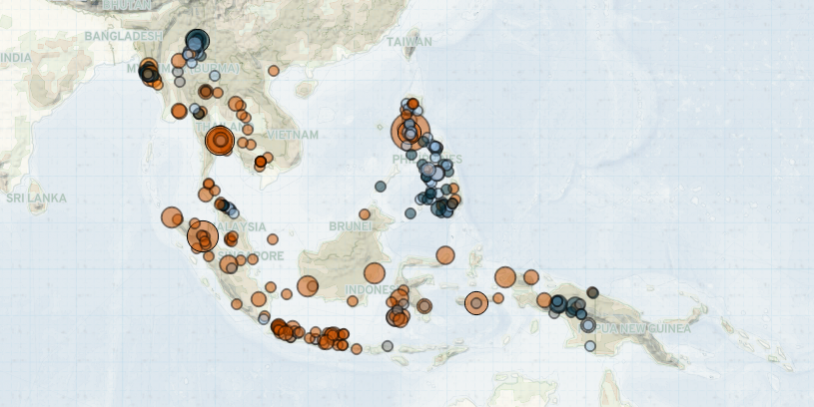 Last week in Southeast Asia, civilian displacement continued in Rakhine state in Myanmar amid ongoing shelling. Meanwhile, election-related violence has been on the rise. Demonstrations also continued across the region. In the Philippines, people protested to mark the anniversary of the imposition of martial law by former President Ferdinand Marcos in 1972. In Indonesia, demonstrations were held in conjunction with National Farmers Day and to call for self-determination in Papua province. Likewise, anti-government demonstrations continued in Thailand. Other notable developments in the region include: Malaysian opposition leader Anwar Ibrahim’s claim of having enough support to form a new government, and exiled Cambodian opposition leader Sam Rainsy’s announcement to return to Cambodia.

Meanwhile, a riot broke out as hundreds of supporters of the opposition Union Solidarity and Development Party (USDP) threw rocks at the home of a supporter of the ruling National League for Democracy (NLD) in Meiktila township in Mandalay region, a stronghold of the USDP. The USDP claimed their movements were blocked by NLD supporters prior to the riot. As the country gears up for general elections in November, reports of election-related violence have been on the rise (Irrawaddy, 24 September 2020). Unexploded grenades were also discovered at an election commission official’s home in Nay Pyi Taw last week, following the commission’s refusal to postpone the election (Myanmar Now, 21 September 2020).

In the Philippines, there was an uptick in demonstrations across the country on 21 September, the 48th anniversary of the imposition of Martial Law by then-president Ferdinand Marcos. People gathered not only to denounce the abuses of Marcos’ military regime, which lasted for 14 years, but also to condemn what they see as similarities between his regime and the current Duterte administration, referencing the ongoing extrajudicial killings and human rights abuses in the country (Manila Bulletin, 21 September 2020). Relatedly, fatal incidents of drug-related violence remained high last week, with at least 10 people killed by vigilantes and police.

There was also an increase in demonstrations in Indonesia last week. On 24 September, demonstrations calling for agrarian reform were held across the country to mark National Farmers Day. Some protesters also voiced opposition to the omnibus bill on job creation. The bill, which the government is aiming to pass in October (Tempo, 9 September 2020), has been touted by the government as a positive boost for the country’s economy, but labor unions and environmental groups alike have criticized it as being overly pro-business (South China Morning Post, 20 August 2020). Meanwhile, protests against the extension of Papua’s Special Autonomy status — which opponents say will only disenfranchise the Papuan people — persisted in Papua province alongside demonstrations marking the first anniversary of last year’s deadly riots, which were sparked by anti-Papuan discrimination (ABC, 19 August 2019).

In Thailand, following a major anti-government rally held on 19-20 September, the number of demonstration events decreased last week. Since the 19 September demonstration, charges have been filed against 16 protest leaders (Bangkok Post, 22 September 2020). This comes amid reports of the harassment of those who have criticized the monarchy. A 15-year-old student was summoned by police for posting about the ongoing protests on social media (The Nation Thailand, 25 September 2020), while pro-establishment activists have filed a lèse majesté complaint against protest leaders and threatened to do the same against a media outlet that broadcasted the demonstrations (Prachatai, 25 September 2020; Bangkok Post, 28 September 2020). Nonetheless, anti-government demonstrators protested again on 24 September to call for reforms to the constitution, as parliament convened to decide on whether or not to proceed with proposed constitutional amendments. The proposed amendments, which include the formation of a new charter-drafting assembly, seek to make the constitution more democratic by amending the electoral system and curbing the senate’s powers. The decision by lawmakers to delay voting on the proposed motions by another month has caused further dissatisfaction among protesters and could likely lead to an escalation in tensions (Bangkok Post, 27 September 2020).

Finally, in Malaysia and Cambodia, announcements by prominent opposition leaders stirred up political tensions in both countries. In Malaysia, opposition Pakatan Harapan leader Anwar Ibrahim unexpectedly convened a press conference on 23 September, during which he claimed to have secured sufficient support to form a new government (Asia Times, 23 September 2020). His announcement came shortly before the highly anticipated Sabah state elections — widely considered to be a referendum for the current un-elected government’s popularity (Aljazeera, 26 September 2020) — and was deemed by his opponents to be an attempt to destabilize an already shaky political landscape (Malay Mail, 23 September 2020). Speculation about another change in government has been running high since Anwar’s announcement.

In Cambodia, the exiled leader of the opposition Cambodia National Rescue Party (CNRP), Sam Rainsy, declared his intention to return to Cambodia to bring about democratic reform in the country. A similar announcement made by Rainsy last year led to a country-wide campaign to crackdown on CNRP members and supporters, with around 100 people arrested (Radio Free Asia, 25 September 2020). Family members of CNRP members jailed as part of the last crackdown have been protesting regularly for the detainees’ release since June of this year.