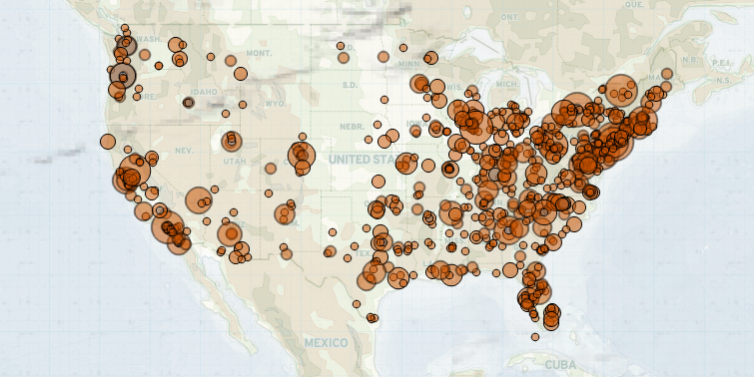 Last week in the United States, the number of demonstration events spiked by nearly 60% relative to the previous week. Following the Kentucky grand jury decision not to indict any Louisville police officers for directly killing Breonna Taylor, demonstrations associated with the Black Lives Matter (BLM) movement increased threefold compared to the week prior. Taylor was shot and killed by Louisville police officers executing a search warrant of her apartment in March. Violent demonstrations were reported in Kentucky, California, North Carolina, Oregon, Missouri, Washington, and the District of Columbia. At events in California, New York, Colorado, and New Mexico, vehicles were driven into demonstrations, injuring several people. Meanwhile, demonstrations over issues related to the coronavirus pandemic, including demands for in-person education and the resumption of high school sports, continued nationwide.

Last week, 45% of all demonstration events reported in the US were associated with the BLM movement. Demonstrations increased following the 23 September decision by a Kentucky grand jury that officers involved in Breonna Taylor’s death were justified in discharging their weapons into her apartment (Washington Post, 23 September 2020). The grand jury decided to indict one of the officers on three counts of wanton endangerment, and set a bail bond at $15,000. The indictment was for recklessly shooting into a neighboring apartment, endangering the lives of others during the raid, and not for the killing of Taylor. The charges could result in fines and up to five years in prison for each count (Washington Post, 23 September 2020). The grand jury decided not to charge any of the three officers directly for Taylor’s killing.

Taylor, a Black emergency room technician, was shot and killed by Louisville police earlier this year when officers raided her apartment and opened fire after her boyfriend fired a warning shot, thinking they were intruders breaking into the home (New York Times, 24 September 2020). A search warrant was issued based on an affidavit from a detective who had been investigating Taylor’s ex-boyfriend and claimed that he had information verified through a US postal inspector that the man had received packages suspected to contain drugs at Taylor’s apartment (WHAS 11, 24 September 2020). However, an internal report from the Louisville Metro Police Department’s Public Integrity Unit indicates that Louisville officers asked police from another department to check with a US postal inspector and were informed that no packages “suspicious or otherwise” were delivered to Taylor’s home in connection with the investigation (30 September 2020, WDRB). A US postal inspector in Louisville told the media that city police did not use his office to verify the detective’s information (30 September 2020, WDRB). Taylor’s lawyers claim that the information provided by the detective was false and that “no packages of interest” had been delivered to the address (WHAS 11, 24 September 2020). The detective has since been “reassigned amid questions about how and why the warrant was approved,” and the warrant application remains under investigation by federal authorities (30 September 2020, WDRB). No drugs were found in the apartment.

Car rammings were reported in several demonstrations associated with the BLM movement last week. In Buffalo, New York, on 23 September, one demonstrator was injured and transported to the hospital with non-life-threatening injuries after being struck by a pickup truck that drove through a group of demonstrators participating in a march (Hill, 24 September 2020). In Los Angeles, California, on 24 September, a vehicle, driving against traffic, accelerated and rammed into at least two demonstrators, causing minor injuries to one of them (Newsweek, 26 September 2020). On the same day, in Eureka, California, videos show a driver running over a demonstrator’s foot after demonstrators stopped the vehicle at an intersection. Likewise, a car was driven through a student-led BLM demonstration at the University of New Mexico in Albuquerque on 25 September, though no injuries were reported (KOB4, 25 September).

On 21 September, Florida Governor Ron DeSantis unveiled the ‘Combating Violence, Disorder, and Looting and Law Enforcement Protection Act’ which, as it stands, would increase legal punishments for various actions during a demonstration, including property damage and blocking roads. The act would grant protection to drivers who injure or kill demonstrators if they are “fleeing for safety from a mob” (Orlando Sentinel, 23 September 2020; Insider, 21 September 2010). Dozens of incidents of individuals driving through crowds of demonstrators have been reported since the latest wave of demonstrations associated with the BLM movement began in May (for more, see the recent US Crisis Monitor report tracking trends during summer 2020). The act also threatens to cut funding for any local governments that reduce their law enforcement budget. If passed, Florida would be the second state in the US to introduce harsher penalties for participating in protests, following Tennessee which passed a similar bill in August (Associated Press, 21 August 2020).

Meanwhile pro-Trump demonstrations and rallies continued last week, and the number of events remained constant compared to the week prior. Violent demonstrations were reported in Yorba Linda, California and in Portland, Oregon. In Yorba Linda, Trump supporters and demonstrators associated with the BLM movement engaged in a physical altercation. One of the demonstrators allegedly participating in the march in support of the BLM movement drove a vehicle through a crowd of Trump supporters, injuring two people.

In Portland, members of the Proud Boys gathered to hold a rally in support of President Donald Trump’s re-election campaign and against Antifa. One of the participants attacked a person livestreaming the event, pushing them to the ground and kicking them in the face. Three demonstrators were issued criminal citations for the possession of loaded firearms in public. The Proud Boys, established in 2016, advocate for “anti-political correctness” and an “anti-white guilt” agenda. While the group attempts to distance itself from the far-right, its members and leaders consistently project extremist views and maintain affiliations with white nationalists (Southern Poverty Law Center). President Trump has been hesitant to denounce white supremacist groups and during the first 2020 presidential debate he referenced the Proud Boys, telling them that they should “stand back and stand by,” which the group’s members have interpreted as a signal of support (Washington Post, 30 September 2020).

Demonstrations over issues related to the coronavirus pandemic continued nationwide last week. Similar to the week prior, demonstrations by parents and students demanding in-person education and the resumption of high school sports were reported in several states, including in Tennessee, California, North Carolina, Illinois, and Washington. The opening of in-person schooling amid the pandemic has become a political issue, with President Trump publicly pushing to open schools in contradiction of Centers for Disease Control and Prevention (CDC) recommendations and guidelines (New York Times, 28 September 2020). According to documents and recent interviews of current and former government officials, the Trump administration pressured the CDC to downplay the risks of opening schools during the pandemic and to produce reports showing a decline in coronavirus cases among young people (New York Times, 28 September 2020; Politico, 12 September 2020). Meanwhile, in several states, including in California, Georgia, Texas, New York, Indiana, and Oklahoma, teachers and parents demonstrated against in-person teaching amid the pandemic.

Lastly, on 26 September, President Trump nominated federal appeals court judge Amy Coney Barrett to fill the Supreme Court seat left vacant by the recent death of Justice Ruth Bader Ginsburg. Demonstrations against the nomination and the possible vote on Barrett’s confirmation before the November presidential elections were reported in more than 20 states. People held marches and demonstrations outside the homes of Senator Lindsey Graham and Senate Majority Leader Mitch McConnell in Washington, DC. During the 2016 election year, both Graham and McConnell had repeatedly argued against filling the Supreme Court seat left vacant by the death of Justice Antonin Scalia, citing the upcoming vote (CBS News, 19 September 2020; New York Times, 21 September 2020). Now, both Graham and McConnell are pushing for a swift confirmation of Barrett. Her confirmation could have even greater political ramifications since President Trump has repeatedly declined to commit to a peaceful transfer of power if he loses the election in November (ABC News, 23 September 2020). Republican Party leaders, including Senator Ted Cruz, have raised the possibility of election results being contested, which could lead to a Supreme Court ruling on the vote, providing further incentive for the administration to confirm Barrett before the election (Hill, 29 September 2020). During the highly contested 2000 presidential election, the Supreme Court made a controversial decision to end the vote recount in Florida, giving the presidency to George W. Bush (New York Times, 13 December 2000).