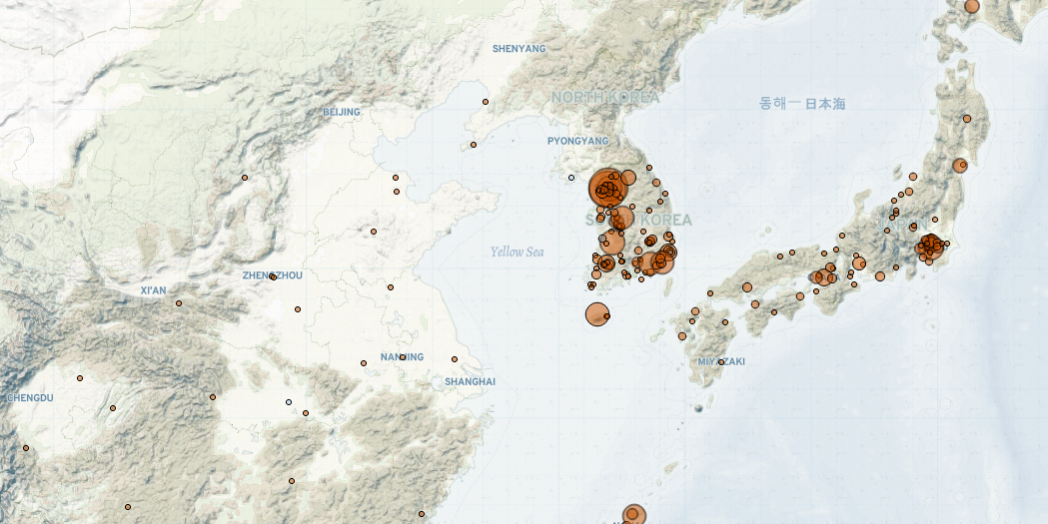 Last week in East Asia, scattered protests were held across Hong Kong in support of the 12 Hong Kong fugitives first captured and detained by mainland Chinese authorities on 23 August. They were fleeing for Taiwan, as some of the detainees were allegedly facing legal liabilities linked to last year’s mass demonstrations. On China’s National Day on 1 October, protests against the Chinese government’s policies towards Hong Kong, Inner Mongolia, and Tibet were reported in Hong Kong, Taiwan, Japan, and Mongolia. In Japan, protests were held against the new Prime Minister’s decision to refuse the appointment of six candidates to the Science Council of Japan, which was seen as infringing on academic freedom. Also in Japan, women gathered to protest against an MP’s comments that were perceived as discriminatory against victims of sexual violence. In South Korea, mass rallies were staged by conservatives calling for the resignation of the Justice Minister amid allegations of abuse of power. Separately, the main opposition party in South Korea demonstrated against the government’s mishandling of the investigation of the killing of a South Korean official by North Korean forces. Lastly, in Taiwan, activists gathered to protest against Japan’s decision to change the name of a group of islands that are disputed by Taiwan, China, and Japan.

In Hong Kong, on China’s National Day on 1 October, demonstrators held scattered protests across the city in support of the 12 Hong Kong fugitives captured and detained by mainland authorities while fleeing for Taiwan. The group was first intercepted on 23 August and has since been in the custody of mainland authorities. It was reported that some of the detainees were facing prosecution for their involvement in last year’s violent demonstrations (SCMP, 30 September 2020). The Civil Human Rights Front (CHRF), an organizer of many of Hong Kong’s mass protests last year, had originally planned to organize a mass rally on National Day as they did last year, but authorities denied their request (SCMP, 25 September 2020). While protests were reported in Yau Tsim Mong and Kwun Tong districts, most of the activities were held around Wan Chai district, where protesters gathered to chant pro-democracy and anti-police slogans. 6,000 police officers were deployed across Hong Kong on the day to stop any protests, and a total of 86 arrests were made (SCMP, 2 October 2020). The muted affair was in stark contrast to the mass rally a year ago, which turned violent as dissatisfaction against the government mounted amid the anti-extradition bill movement. The tougher measures to crack down on the pro-democracy movement have been hailed as a “return to stability” by the Chief Executive of Hong Kong. At a reception in commemoration of the National Day, the Chief Executive highlighted the effectiveness of the National Security Law in restoring stability in the city after a year of mass social unrest (Straits Times, 2 October 2020).

In Taiwan, also on China’s National Day, a protest was held at the Beishan Broadcasting Wall on Kinmen Islands, the closest point in Taiwan to China, located just 2 km away from China’s Xiamen City. This event was part of a global “Resist China” campaign, as protesters expressed their support for the independence of Taiwan and Tibet, and freedom for the people of Hong Kong (CNA, 1 October 2020).

Meanwhile, in Japan, a protest was held in Tokyo against the Chinese government’s suppression of the democratization movement in Hong Kong, as well as their repression of various minority ethnic groups, including Tibetan, Taiwanese, Uyghur, and Mongolian groups, in Inner Mongolia. The protest occurred in reaction to China’s recent policies affecting these groups, including abolishing Mongolian language education in Inner Mongolia. Besides Japanese activists, about 600 Uyghurs, over 2,000 Hong Kongers, and more than 600 Tibetans and Mongolians reportedly joined the protest, as did participants from other Asian nations (Asian News International, 3 October 2020). While this is not the first time such protests have been held, it is the first time ACLED has recorded these minority groups gathering in such large numbers over these issues in Japan.

In Mongolia, dozens of people protested in Ulaanbaatar, demanding the release of ethnic Mongolians arrested in the Inner Mongolian region of China (News.mn, 2 October 2020). The Inner Mongolians were arrested by the Chinese authorities in September for protesting over a new education policy which replaces school instruction in Mongolian with Mandarin Chinese . The protest in Ulaanbaatar occurred days before the US Secretary of State’s scheduled visit to East Asia, which excludes China in the context of growing tensions between the two countries. The visit to Mongolia was eventually canceled due to US President Trump’s COVID-19 diagnosis.

In Japan, Prime Minister Yoshihide Suga’s failure to confirm the appointment of six out of 105 candidates nominated to the Science Council of Japan, the representative body for scholars and scientists from all fields, sparked backlash among academics. This marks the first time a Prime Minister has not confirmed all 105 replacement candidates nominated to the council every three years. As some of the rejected scholars had spoken out against the Security Bill and the Conspiracy Law (TV Asahi, 1 October 2020), Suga’s actions were perceived as a violation of academic freedom. A large online protest, which generated over 250,000 tweets against Suga’s decision, was held on 2 October (Tokyo Shimbun, 2 October 2020). Professors and students gathered for a large in-person protest in front of the Prime Minister’s Office the next day (Mainichi Shimbun, 3 October 2020). This is the first large-scale protest against a decision made directly by Suga, who was inaugurated just last month.

Separately, a series of demonstrations were held nationwide after Liberal Democratic Party (LDP) lawmaker Sugita Mio made comments perceived as discriminatory against female victims of sexual violence. Sugita is notorious for her conservative views, and this is not the first time her comments have provoked an uproar (Mainichi Shimbun, 27 July 2018). The protests were organized by the Flower Demo movement, a female-led movement that aims to draw attention to the ongoing issue of sexual discrimination and violence against women in Japan. While the movement usually holds events monthly on the 11th, they gathered spontaneously to protest against Sugita’s comments. The demonstrators demanded Sugita’s resignation and appealed to the public to support victims of sexual violence. This marks the first time the organizers of the Flower Demo movement have gathered for ad-hoc protests outside of their monthly demonstrations since the movement began in 2019.

In South Korea, despite the Korean government’s discouragement of mass rallies during the coronavirus pandemic, nationwide anti-government rallies were staged by conservative organizations. In an attempt to comply with pandemic restrictions, conservative groups held “drive-through” anti-government rallies, demanding the resignation of the Justice Minister (Yonhap News Agency, 3 October 2020). Although prosecutors cleared the Minister of charges that she used her influence to extend her son’s leave from military service in 2017, protests demanding the Minister to step down have continued. This draws parallels to a similar scandal last year when the Moon administration’s Justice Minister was forced to resign after weeks of large protests.

Separately, lawmakers from the conservative People Power Party – the main opposition party – criticized the government’s mishandling of the investigation into the shooting of a South Korean official by North Korean forces. The official was shot dead on 22 September after crossing the maritime border into North Korea. The lawmakers took turns to stage a series of one-person protests in front of the Blue House in Seoul and in their local constituencies (The Korea Herald, 27 September 2020). The incident is seen as a setback to the reconciliation efforts between the two countries.

Lastly, in Taiwan, protesters gathered at Keelung Port ahead of Japan’s planned name change for a group of islands claimed by both Taiwan and Japan. The islands are known in Taiwan as Diaoyutai. Protesters had originally planned to sail out to the disputed islands, but instead held the protest at the port after several boat captains declined to take them to the islands (Taiwan News, 30 September 2020). Japan plans to change the name of the disputed islands to Tonoshiro Senkaku. Taiwan and mainland China view this as a provocation, as they still claim sovereignty over the islands. This development may further inflame tensions in the area.