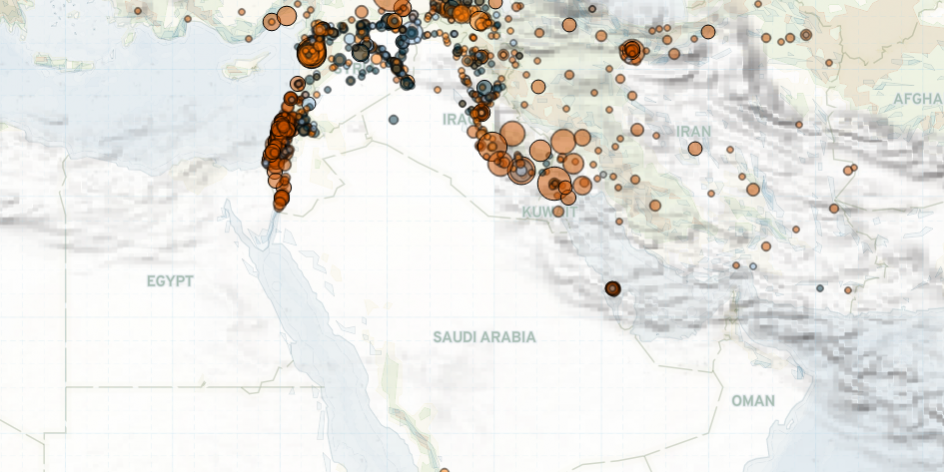 Last week in the Middle East, the Islamic State (IS) carried out several attacks in eastern and central Syria against pro-Assad forces. Fighting continued in Yemen as Houthi forces pushed closer to Marib, while 1,000 Sudanese troops were reportedly sent to Yemen via Saudi Arabia. In Israel, anti-Netanyahu demonstrations continued despite new coronavirus restrictions, while pro-Azerbaijan rallies were held in Turkey and Iran. Finally, in Kuwait, a new Emir was sworn in.

In Syria, IS launched several new attacks in central and eastern Syria  — including near Al Teem oil field — against regime forces and their allies. The attacks were followed by heavy clashes and regime airstrikes. A 48-hour long clash ensued following an IS attack in Ar-Raqqa, reportedly resulting in heavy casualties among regime forces. Elsewhere in southern Syria, regime forces entered Kanaker in Rural Damascus after having besieged the town for almost two weeks. This followed demonstrations against the arrest of three local women, who were detained while passing through a checkpoint and taken to an undisclosed location. As part of an agreement between the government and the local reconciliation committee, regime forces pledged to release the three female detainees and to lift the siege, which had prevented the entry of basic materials, food, and medicine to the town. In return, they were allowed to inspect houses that are believed to have weapon caches (North Press agency, 4 October 2020). According to ACLED local partner the Syrian Network for Human Rights, at least 62 people, including six women and two children, were arbitrarily detained in Syria in September 2020. This marks the highest number of monthly arrests since the outbreak of the coronavirus pandemic (SNHR, 2 October 2020).

In Yemen, fighting between Houthi and anti-Houthi forces continued on multiple fronts. Houthi forces made advances in northern and southern Marib, pushing closer to the strategically important Marib city. This threatens thousands of previously internally displaced persons (Reuters, 5 October 2020). Fighting continues in northwestern Ad Dali, southern Al Hodeidah, southern and eastern Al Bayda, and on the Lahij-Taizz border. Infighting between anti-Houthi forces also occurred behind frontlines in Al Hodeidah and Taizz, and between forces loyal to the Southern Transitional Council (STC) and the internationally-recognized Hadi government in Abyan. Additionally, a security operation in Al Ghaydah city, capital of Al Mahrah governorate, reportedly resulted in the killing of 3 Al Qaeda (AQAP) members and the capture of others (Arab News, 3 October 2020).

Despite the continued clashes between pro-STC and pro-Hadi forces in Abyan, the two forces implemented a prisoner exchange deal that saw about 70 fighters exchanged, including the commander of the pro-Hadi 115th Brigade (Al Khaleej Today, 1 October 2020). Likewise, on 27 September, the pro-Hadi and Houthi governments agreed to another prisoner exchange after UN-sponsored negotiations in Switzerland (Al Jazeera, 27 September 2020). However, within a week of the agreement — and before any implementation of the deal — at least two prisoners of Houthi forces due to be released died from unclear causes. Signs of torture were reported on the body of one of the prisoners. Their deaths may negatively affect implementation procedures.

In Saudi Arabia, recent reports indicated that over 1,000 Sudanese army officers and soldiers arrived in Jizan port on 22 September, ostensibly en route to Yemen (Middle East Eye, 2 October 2020). This redeployment indicates a reversal of Sudan’s previous decision to limit its forces in Yemen to 657 personnel in January 2020, after a high of around 40,000 in early 2017 (Carnegie Endowment, 15 April 2020). Some reports have indicated that they have been active on the frontlines in Yemen since 2 October. Additionally, the Saudi Presidency of State Security claimed that it “disrupted a terrorist cell” of Islamic Republic Guard Corps-trained operatives in the Kingdom the previous week (Twitter, 28 September 2020). Notably, there were no claims of drone or missile strikes in Saudi Arabia by Houthi forces.

Last week in Israel, demonstrations calling for the resignation of Prime Minister Benjamin Netanyahu continued across the country. The Israeli Prime Minister is on trial on multiple corruption charges and is being blamed by many Israelis over the country’s handling of the pandemic. Last week, Israel’s parliament passed a new law that limits demonstrations to groups of 20 people within 1 kilometer from their homes during the coronavirus lockdown (Deutsche Welle, 4 October 2020). Critics have accused the Prime Minister of using the lockdown to suppress dissent, suggesting that the contentious legislation is aimed at criminalizing the weekly anti-Netanyahu rallies, which have been ongoing since June (Guardian, 30 September 2020).

In light of an increase in attacks by those who oppose the demonstrations (New York Times, 5 October 2020), Netanyahu has also been criticized for portraying demonstrators as left-wing “anarchists” and “traitors,”exacerbating the polarization of society (WSWS, 5 October 2020). As thousands of people defied the new restrictions and took to the streets in Tel Aviv on 1 October, a car stopped and then accelerated into a group of protesters standing in the middle of a road before fleeing the scene. A woman was hit, but no serious injuries were reported. A suspect was later arrested on suspicion of “premeditated grievous assault” (Time of Israel, 5 October 2020). The police have also been accused of violence as they detained or dispersed demonstrators (New York Times, 5 October 2020). According to the mayor of Tel Aviv, demonstrators were peaceful and practicing social distancing when police raided a group of 120 people on 3 October, targeting “one young woman with inexplicable violence” (Time of Israel, 4 October 2020). Israel’s Tourism Minister, a member of the centrist Blue and White Party, resigned on 2 October, citing the crackdown on the demonstrators and accusing the Prime Minister of running “the country according to his own political interest” (Reuters, 2 October 2020).

Meanwhile, demonstrations were held in both Iran and Turkey in solidarity with Azerbaijan amid Azerbaijan’s ongoing clashes with Armenia in the Nagorno-Karabakh region. Turkey, which shares strong linguistic and cultural ties with Azerbaijan, has firmly put its support behind Azerbaijan, vowing to support it “on the battlefield or the negotiating table,” if needed (Associated Press, 2 October 2020). However, the government has rejected allegations that its military “experts” were “fighting side by side with Azerbaijan” and that it had sent F-16 combat jets and several hundred Syrian fighters to assist Azerbaijan (VOA, 29 September 2020).

Iranian leaders are faced with a much more delicate balancing act in the conflict than Turkey. Given its sizable Iranian-Azeri minority — comprising a quarter of the population — Iran has to be careful not to damage sensitive relations with Azerbaijan. Following last week’s pro-Azerbaijan demonstrations in the capital and several predominantly Azeri cities, the Friday prayer leaders of four Iranian provinces expressed their support for Baku in a joint statement (Al Jazeera, 5 October 2020). However, experts argue that it is not in Iran’s national interest to deal with an emboldened pro-NATO Baku, which has close ties with Israel (Asia Times, 29 September 2020). Azerbaijan had accused Iran of supporting Armenia in the past, and videos on social media allegedly show Russian military equipment being transferred to Armenia via trucks passing through the Iranian border. Iranian officials have rejected the allegations and have offered to mediate between the two countries (Anadolu Agency, 29 September 2020). Spill-over of the conflict into Iranian territory remains the main worry of Iranian leadership, as several shells have landed in Iran, with one injuring a six-year-old on 1 October. Iran’s Defense Minister has cautioned the warring parties that “Tehran will take measures stronger than warnings” if shells continue to hit Iranian territory (Tasnim, 6 October 2020).

Finally, Nawaf al-Ahmed al-Jaber al-Sabah was sworn in as Kuwait’s new Emir on 30 September, following the death of his 91-year-old half-brother Sheikh Sabah. Nawaf is expected to continue the nonaligned foreign-policy approach pursued by the late Emir, who played an intermediary role between many regional states (Foreign Policy, 30 September 2020). Kuwait’s domestic political landscape, however, may undergo change if the new Emir makes a bid for national reconciliation (Bloomberg, 30 September 2020). Sheikh Nawaf met with two of Kuwait’s veteran opposition politicians and received proposals for political and economic reforms — including anti-corruption measures — last month while he was still crown prince. With parliamentary elections scheduled to take place in the coming months, “the big question for the opposition is whether the new Emir will change the electoral law” and allow the return of self-exiled opposition leaders (Reuters, 1 October 2020). The electoral law was changed in 2012 by the late Emir, when the Arab Spring reached Kuwait and thousands of protesters and opposition parliamentarians demanded constitutional change to increase the power of the Parliament. The government responded by arresting dozens of protesters, dissolving the opposition-dominated Parliament, and using an emergency law to change the rules in favor of government candidates (New York Times, 29 September 2020). The new Emir’s steps towards reconciliation, consideration of a new electoral rule, and economic reforms, including anti-corruption drives, will determine the character of his reign in the years to come (Carnegie, 30 September 2020).