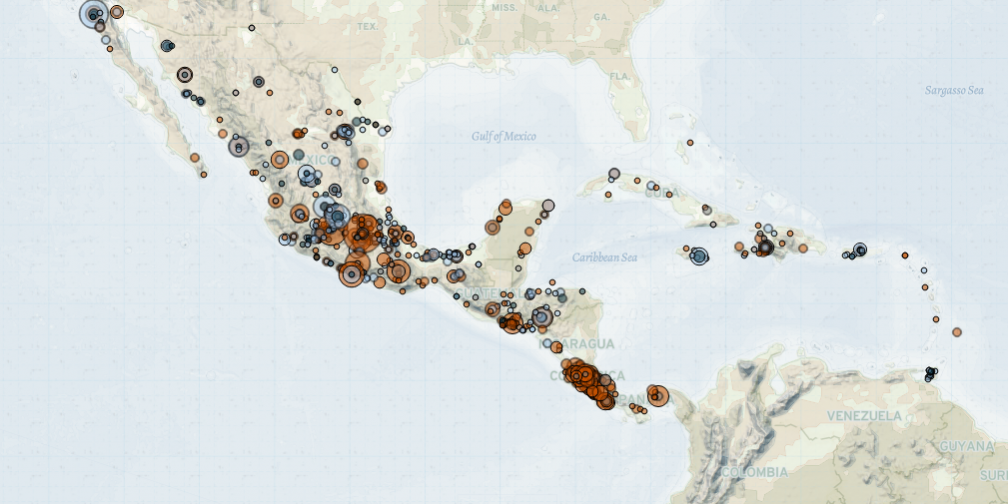 Last week in the Mexico, Central America, and Caribbean region, demonstrations against tax reforms continued to climb in Costa Rica, as demonstrators pressure the government to pull out of negotiations of a loan with the International Monetary Fund (IMF). In Guatemala and Mexico, women demonstrated against gender-based violence amid increasing rates of violence targeting women. In Nicaragua, students demonstrated against a bill on cybersecurity, which criminalizes the spread of fake news and information on the Ortega regime. Meanwhile, 54 political prisoners started a hunger strike demanding their release and an end to torture. In Haiti, police violence sparked unrest, resulting in the killing of one demonstrator by law enforcement. Meanwhile, doctors protested against the kidnapping of a colleague by armed men amid soaring violence in the capital and in provinces of Haiti. In Mexico, the turf war between the Jalisco New Generation Cartel (CJNG) and the Santa Rosa de Lima Cartel over the control of the state of Guanajuato continues to claim lives, with fatalities reported in the neighboring state of San Luis Potosi.

In Costa Rica, the government’s proposal to raise taxes continued to spark unrest. Demonstrators organized road blocks throughout the country for the second consecutive week. Clashes between law enforcement and demonstrators were reported, mostly in the districts of Limon, Guanacaste, and Puntarenas. The government’s tax proposal comes amid negotiations with the IMF over a financial aid package to stimulate the Costa Rican economy. Demonstrators, led by the National Rescue Movement — a movement that emerged from a coalition of labor unions, small businesses, and landowners during the coronavirus pandemic — demanded the cancellation of negotiations with the IMF. Although President Carlos Alvarado announced the withdrawal of the initial proposal earlier last week, demonstrators fear that the government will further engage in negotiations with the IMF and will propose new austerity measures (El Pais, 9 October 2020).

Demonstrations against gender-based violence were recorded in Guatemala and Mexico last week. This follows drastic increases in violence targeting women — which includes domestic violence — during the coronavirus pandemic, according to data released by the International Rescue Committee (IRC) in June (IRC, 9 June 2020). In Guatemala City, members of women’s rights groups from different parts of the country protested to demand greater measures to tackle the issue, while in Teculután, Zacapa some 350 people demanded justice for the killing of a woman on 7 October. Women’s right groups have criticized the government for failing to reduce gender-based violence. Although the government has emphasized the severity of violence against women during the pandemic, it has announced a plan to downgrade the status of the Presidential Secretary of Women, an advisory and coordinating entity on public policies affecting women (Nomada, 3 September 2020). Similarly, in Mexico, localized demonstrations were reported in Mexico City and in the states of Guanajuato and Veracruz following the rape and murder of three women in separate events across the country. The demonstrations come weeks after nationwide demonstrations against the failure of Mexican institutions to seriously address gender-based violence.

In Nicaragua, students demonstrated against a bill on cybercrime, which would criminalize the spread of fake news or the release of information on the regime of Daniel Ortega. The bill was introduced shortly after the pro-government Sandinista National Liberation Front proposed the so-called Regulation of Foreign Agents bill, aiming to force organizations receiving foreign funds to undergo financial inspections (Human Rights Watch, 8 October 2020). Opposition groups fear that both proposals aim to silence dissent and to impose further restrictions on freedom of expression nearly a year ahead of the next general election. In September, acts of intimidation and attacks against political activists and civil society actors by law enforcement and by pro-government militia increased.

Meanwhile, 53 political prisoners in Nicaragua started a hunger strike to demand they be released. Three prisoners sewed their mouths shut to protest against torture they have allegedly endured. During the coronavirus pandemic, the government ordered several releases of prisoners since April for sanitary reasons. The measure did not apply to prisoners who were jailed for dissenting political opinions (Amnesty International, 10 August 2020).  As such, about 94 opponents of the Ortega regime are currently jailed after being arrested at protests or for voicing dissent (UNHCR, 14 September 2020).

In Haiti, the killing of a student by police forces during a demonstration sparked unrest in Port-au-Prince over four consecutive days. Several cars were set on fire and students erected flaming barricades. On 5 October, demonstrators clashed with law enforcement, which intervened with tear gas and live ammunition. One demonstrator was killed. In September alone, 44 cases of abuse of police force were opened for investigation. In addition, police have been frequently denounced for their excessive use of force against demonstrators, as witnessed in 2019 during a wave of anti-government demonstrations (HPN, 5 October 2020; Amnesty International, 31 October 2019).

Meanwhile, gang activities continue to claim lives in Haiti as insecurity continues to rise. In Carrefour, Port-au-Prince, doctors demonstrated following the kidnapping of one of their colleagues by armed men. Kidnappings perpetrated by alleged gang members wearing police uniforms have been on the rise in the capital and in the provinces of Haiti. After organized crime groups stopped receiving payments from the government, gangs have multiplied kidnappings and requests for ransom in an alleged attempt to compensate for their loss of income (Le Nouvelliste, 7 Octobre 2020). In the Northwest region of the country, members of a gang set houses on fire and killed several residents in the municipality of Saint-Louis du Nord; this comes months after a similar incursion in the same locality in August. Intensifying clashes between rival gangs and violence targeting civilians have been attributed to the shifting of gang alliances following the creation of the G9 gang coalition by the influential gang leader Jimmy Chérizier. Allegedly, the government has supported the newly created gang coalition, viewed as a way to unite gangs and silence opposition ahead of the upcoming elections (Insight Crime, 24 July 2020).

In Mexico, gang violence continued between the CJNG and the Santa Rosa de Lima Cartel. A video was released showing a clash between the two gangs in the state of Guanajuato over disputed territory last week. In the neighboring state of San Luis Potosi, over 20 fatalities were recorded in one day alone as a result of killings perpetrated by armed groups. In El Barril, the Santa Rosa de Lima Cartel killed 12 people in an attack that could be related to its turf war with the CJNG. Recently, the presence of the Santa Rosa de Lima Cartel was reported in the state of San Luis Potosi on several occasions. Allegedly, members of the cartel tried to reorganize their operations following a forceful retreat from the state of Guanajuato, caused by the expansion of the CJNG (Milenio, 9 July 2020). In addition, the CJNG announced its arrival in San Luis Potosi in February (Mexico News Daily, 4 February 2020), suggesting that the ongoing conflict may have ramifications now in both Guanajuato and San Luis Potosi states.