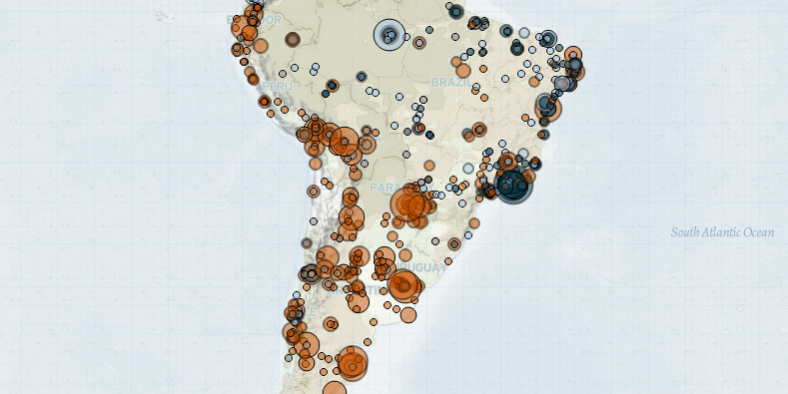 Last week in South America, demonstrations over coronavirus-related issues continued across the region. Meanwhile, political killings took place in Colombia, and social and political unrest was reported  in Chile and Venezuela. In Brazil, armed clashes continued between armed groups and state forces.

The number of coronavirus pandemic-related demonstration events significantly declined across the region in comparison to the previous week. In Bolivia, parents of students continued to block streets in the cities of Tarija, La Paz, Sipe Sipe, and Cochabamba. They demanded that schooling incentives, such as the breakfast bonus, be distributed in cash as classes have been suspended since the onset of the pandemic. In Paraguay, indigenous people carried out a protest in Caaguazu municipality against the government’s lack of assistance during the pandemic. They demanded improvement in basic services. In Brazil, labor groups continued to protest to demand that they be allowed to resume their businesses, which are still restricted due to coronavirus outbreaks.

Meanwhile, in Venezuela, the number of demonstrations continued to increase, with citizens demanding access to basic services, including potable water, electric power, gas for domestic use, along with the distribution of fuel. Additionally, a nationwide protest called by teachers, to ask for better salaries and working conditions, took place across several cities on 5 October.

In Colombia, reports of political killings continue to decline across the country. An Awa indigenous leader was killed in Tumaco, Nariño department. On another note, one of the main leaders of the dissident group from the Revolutionary Armed Forces of Colombia (FARC), the Second Marquetalia, was arrested in Popayán, Cauca department. He is accused of forced population displacement, as well as coordinating FARC dissidents in the Cauca department and engaging in combat with state forces. The Second Marquetalia is a group made up of former FARC members who refused to demobilize after the 2016 Peace Agreement with the Colombian government. (For more, see the recent ACLED Analysis piece: Understanding the Killing of Social Leaders in Colombia During COVID-19).

In Chile, protests against police brutality were held, calling for police reform and the resignation of the General Director of the Police Forces. The demonstrations were fueled by an event that took place on 2 October in which a 16-year-old boy was pushed from a bridge by a police officer into the Mapocho river during an anti-government demonstration.

Meanwhile, tensions in the south of the country rose as suspected indigenous militiamen carried out an arson attack, setting fire to at least 15 trucks in Angol area, Araucania region (La Nacion, 9 October 2020). Indigenous groups demanding land restitution from areas controlled by forestry companies often carry out attacks on the Araucanía and Biobío regions (for more, see the recent ACLED Analysis piece: Understanding Indigenous Conflict in Chile). Consequently, truckers’ unions stopped all activities and threatened to escalate their actions if the government does not guarantee more security for their drivers.

In Brazil, at least 51 people were killed in armed clashes between armed groups and state forces, as well as between different organized criminal groups due to territorial disputes. During one of these clashes, a local leader of the Red Command (CV) in Lucas do Rio Verde municipality, Mato Grosso state, was killed. Still in Mato Grosso state, another CV member was killed alongside three other people in the city of Pedra Preta. Another man was killed by CV members in the city of Tapurah after posting on social media a statement in which he claimed to belong to the group. Moreover, clashes were reported in Rio de Janeiro between the criminal groups Amigos dos Amigos (ADA), CV, and militia groups in the western zone of the city over drug-trafficking territorial disputes. Several communities in the west zone of the city are under the control of police militias that are also involved in drug trafficking activities. A large-scale operation was carried out by state forces against international drug-trafficking operations connected to the First Capital Command (PCC) at Viracopos International Airport, Campinas municipality, São Paulo (G1, 11 October 2020; Istoé, 9 March 2018). Two individuals were killed in armed clashes that happened during the operation and police carried out 35 arrest warrants in the states of São Paulo, Mato Grosso, Amazonas, and Rio Grande do Norte. Among the individuals arrested were civil and military police officers, both of whom passed on logistic and security information to the PCC. The group’s heist was organized in three core categories: (1) management and grooming of employees; (2) employees working inside the airport, such as logistics operators; and (3) the European group, who bought the drugs and managed its withdrawal in Europe (UOL, 6 December 2020).

Finally, several attacks continued to be reported in Brazil in the lead up to municipal elections expected to take place on 15 November. In recent years, political killings prevailed during municipal elections and were linked to militia groups (InSight Crime, 3 October 2016). In Pedro Velho city, Rio Grande do Norte state, a candidate for city hall affiliated with the Democrats Party (DEM) was executed by two men during a political event. The perpetrators were family members of one of the City’s Councilmen. Likewise, in Dom Eliseu city, Pará state, a candidate for city hall affiliated with the Solidarity Party (SD) was shot to death in the city center, in a politically-motivated attack. In Itaquaquecetuba city, São Paulo state, a candidate for city council was attacked and injured in a drive-by shooting when arriving home. The attack occurred after he announced he would report drug-trafficking activities in the city.