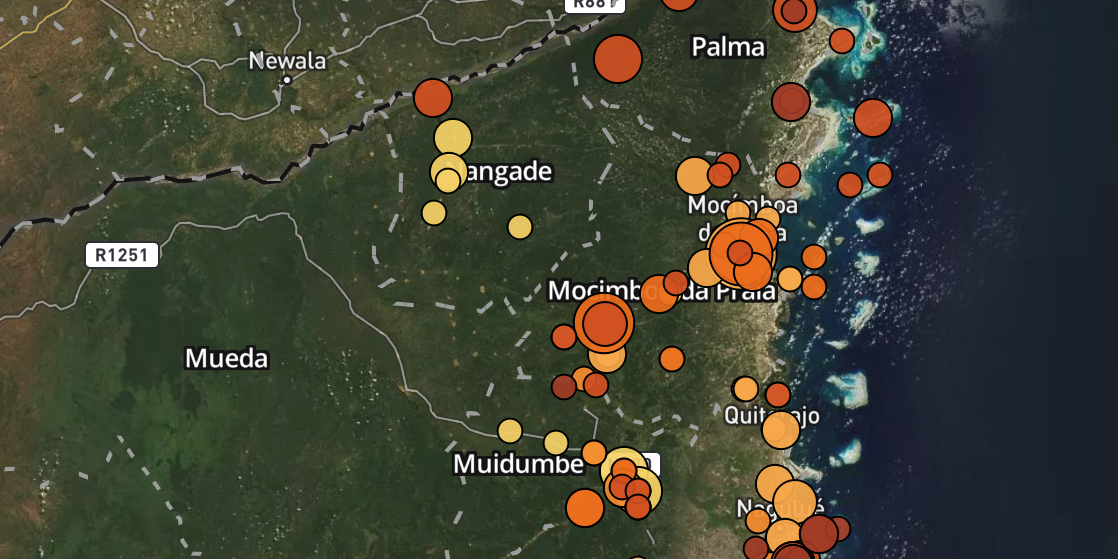 The Cabo Delgado conflict took on a more regional character last week, as a major attack in Tanzania on the same day as three other attacks across Cabo Delgado demonstrated the insurgency’s reach.

On 14 October, insurgents entered Kitaya, a village in Tanzania’s Mtwara region on the north bank of the Rovuma river. The BBC reported at least 20 killed in the attack, and subsequent videos on social media showed that the attackers captured a Tanzanian military WZ-551 armored vehicle. More details on the attack are available in this week’s incident focus.

In Nacate, Macomia district, insurgents arrived at night and set fire to homes. One girl died after she was caught inside one of the burning houses. The attackers left the same night. People in Macomia town, just to the north of Nacate, and surrounding villages slept in the woods out of fear that the insurgents would strike the town next. According to a Carta de Mocambique report, a contingent of insurgents did attempt to attack Macomia town that night, but were repulsed by government troops. Insurgents last occupied Macomia town in late May of this year.

In Namalala, a village in southern Palma district on the road to Mocimboa da Praia, insurgents attacked during the night, injuring an unknown number of civilians and burning homes. Residents of the village fled north to Palma town.

Two days later, on 16 October, insurgents attacked Olumbe, Palma district, about 20 kilometers northeast of Namalala. The initial assault displaced a unit of marines defending the village, causing an unknown number of casualties. The marines retreated north toward the Afungi peninsula, where other marine units are stationed as part of the joint task force that guards the liquified natural gas infrastructure there. After the marines left, insurgents burned homes in the village, forcing local civilians to flee. Dyck Advisory Group (DAG) helicopters responded to the raid, leading to one report that the attackers had been repelled.

On 14 October, the same day that insurgents were launching near-simultaneous attacks across four districts and two countries, Mozambican forces held a photo opportunity for the pro-government website Notícias de Defesa in Quissanga district, in which soldiers and DAG personnel once again searched two former insurgent hideouts in near Cagembe. According to Notícias de Defesa, the search recovered 30 AK-47 magazines, some uniforms, and other camp sundries. The operation comes in response to the recent renewal of insurgent attacks in Quissanga district. Ndique, which is roughly 20 kilometers southeast of Cagembe, was attacked by insurgents the same day.

New information also emerged last week about earlier incidents in the insurgent offensive on eastern Macomia district. On 7 October, a group of seven insurgents attacked Ilha Makalowe, killing two civilians and burning houses and buildings near the market area. Sometime during the subsequent weekend (9-11 October), insurgents launched a new raid on Nambo, in which three civilians were killed and two abducted.

A report also came through last week that insurgents are particularly keen on collecting mobile phones from civilians during attacks. Taking the phones helps the insurgents by giving them more methods of communication, limiting their victims’ ability to communicate, and providing them with the information needed to target particular individuals. For example, during the recent insurgent offensive in eastern Macomia district, insurgents acquired the phone of the Frelimo First Secretary in Mucojo. Using that phone, they were able to contact the mayor of nearby Manica village, in order to issue a death threat.

As previously reported, however, the phones can be a double-edged sword. If the government knows a phone has been stolen, it can track the phone’s location and use that information to launch attacks.

Details about the 14 October attack on Kitaya are still somewhat murky. An eyewitness said that two civilians had been killed, while other sources put the fatality count at over twenty. Still others say that three Tanzanian soldiers and 15 civilians were beheaded. What is clear, however, is that insurgents crossed from Mozambique and arrived in Kitaya at night. There, they both attacked the town and engaged with Tanzanian security forces, capturing a WZ-551 armored vehicle. They left the same night. The Islamic State claimed the attack shortly afterward. The Tanzanian government has not yet acknowledged the attack.

The Kitaya attack is not the first insurgent incursion into Tanzania since the start of the Cabo Delgado insurgency, but it is certainly the most significant. The only other attack in Tanzania that originated in Mozambique was the November 2019 raid on Ngongo, a village on an island in the Rovuma river. The Ngongo raid was deadly, killing six Tanzanian civilians and injuring seven, but it seemed like a natural extension of a conflict for the loyalties of Cabo Delgado civilians who live their lives on both sides of the border. The Kitaya attack also struck an area of importance to Cabo Delgado civilians, as over 830 displaced Mozambicans were recently evicted from Kitaya by the Tanzanian government. The attack seemed directed not at Cabo Delgado, or even Mozambique, but instead at Tanzania itself.

In a video of the attack that was released on social media, insurgents shout in Kiswahili that they are “Al Shabaab from Mozambique” and that they have “come to remove Magufuli,” referring to Tanzanian president John Magufuli. Magufuli faces an election on 28 October, and insurgents can be seen in the video tearing down one of the president’s campaign posters. The explicit aim to influence Tanzanian national politics is a first for the insurgents, who up to now have focused their messaging on Cabo Delgado, and, to a lesser extent, Mozambique broadly.  Even the more regionally-focused Islamic State, in its statements about its Mozambican affiliate, tends to focus more on deterring international involvement in Cabo Delgado than on becoming political actors in surrounding countries.

Tanzania plays a special role in the Cabo Delgado insurgency. Many of the clerics associated with the insurgency trained in Tanzania, and analysts have long speculated that Islamist militants arrived in Mozambique from Tanzania following a Tanzanian government effort to root out a budding insurgency in Kibiti and Rufiji districts in 2017. Tanzanian security forces have also been involved in the counterinsurgency effort, arresting 104 people in 2018 on suspicion of plotting with the insurgency and carrying out sweeps of border areas to prevent the insurgency from establishing a Tanzanian foothold.

It is a major step, however, from insurgents engaging with Tanzania because they are operating in a borderland where what happens in southern Tanzania directly affects what happens in Cabo Delgado to insurgents threatening the Tanzanian national government. The attack and the accompanying video indicate a more international focus and a broader ambition than the insurgency has previously shown. The attack is sure to cause concern among regional governments, which have not yet been able to coordinate a response to the insurgency through the Southern African Development Community.

The displacement situation in Cabo Delgado continues to worsen. On Ilha Matemo, where civilians displaced from eastern Macomia district have congregated, diarrhea deaths had climbed to six by 15 October. The district health service tried to send a team from Ibo to address the sanitation problems on Ilha Matemo, but they were turned back by bad weather.

On 18 October, 25 boats carrying roughly 700 people from eastern Macomia district arrived in Pemba. Most of the displaced were women and children. In all, the government estimates that there are now some 304,000 displaced civilians in Cabo Delgado, plus many others who have fled to other provinces. Among those who have left Cabo Delgado are 8,500 people now in Namialo, Nampula province, where the World Food Programme and Mozambique’s Islamic Council are providing food, shelter, and other aid.

For those who remain in their homes, joining government-backed militias is an increasingly available option. Reliable reports identified militias in Lyaula and Nangude, Muidumbe district, and Licangano, Macomia district, as well as one from an unidentified part of Mueda district. The Muidumbe militias took on an offensive operation at some point during last week, searching nearby Chitunda for insurgents. They did not find anyone in the village. In Licangano, militia members received arms directly from the district police command.

There was little movement on the international front last week. Mozambican president Filipe Nyusi had telephone calls with his counterparts in South Africa and Botswana during which they discussed security issues, but no further details have been disclosed. No new information about a mooted security and humanitarian assistance package from the European Union (EU) has emerged either. Human Rights Watch has called on the EU to disclose the terms of any deal and to obtain “verifiable commitments from the Mozambican security forces to respect human rights in its operations and hold violators accountable” in exchange for assistance.

Around 13 October 2020 (between 13 and 14 October), FDS forces clashed with insurgents in Nacate (Macomia, Cabo Delgado). During the attack, several houses were set on fire, and a girl was killed; no other reports on injuries and/or fatalities.

On 14 October 2020, several villagers were injured during an attack by insurgents in Namala, 20 km from Olumbe (Palma, Cabo Delgado). Houses were set on fire.

On 14 October 2020, FDS forces clashed with insurgents in Macomia (Macomia, Cabo Delgado). The group burned houses during the attack; a woman died inside a burning house.

On 14 October 2020, two people were killed by insurgents during an attack in Indique/Ndique (Quissanga, Cabo Delgado).

On 16 October 2020, FDS forces clashed with insurgents at a military outpost near Olumbi (Palma, Cabo Delgado). An unidentified number of soldiers were killed. 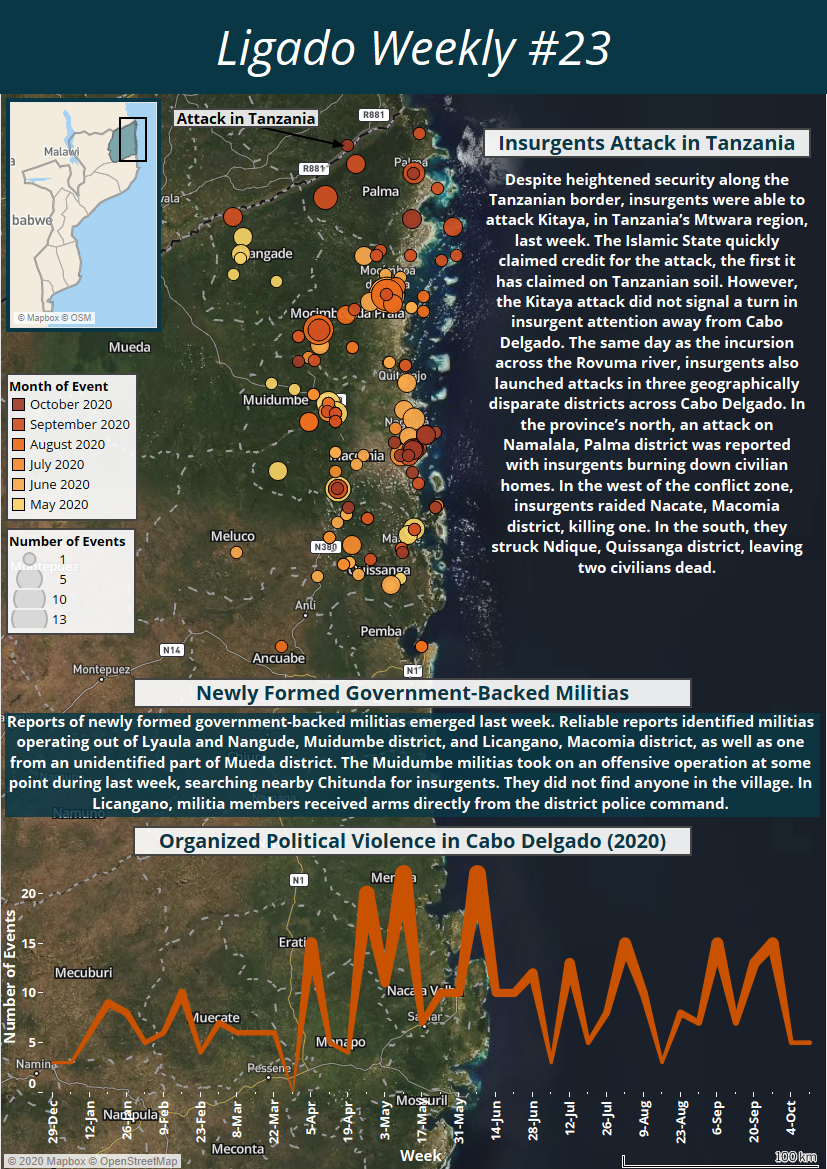