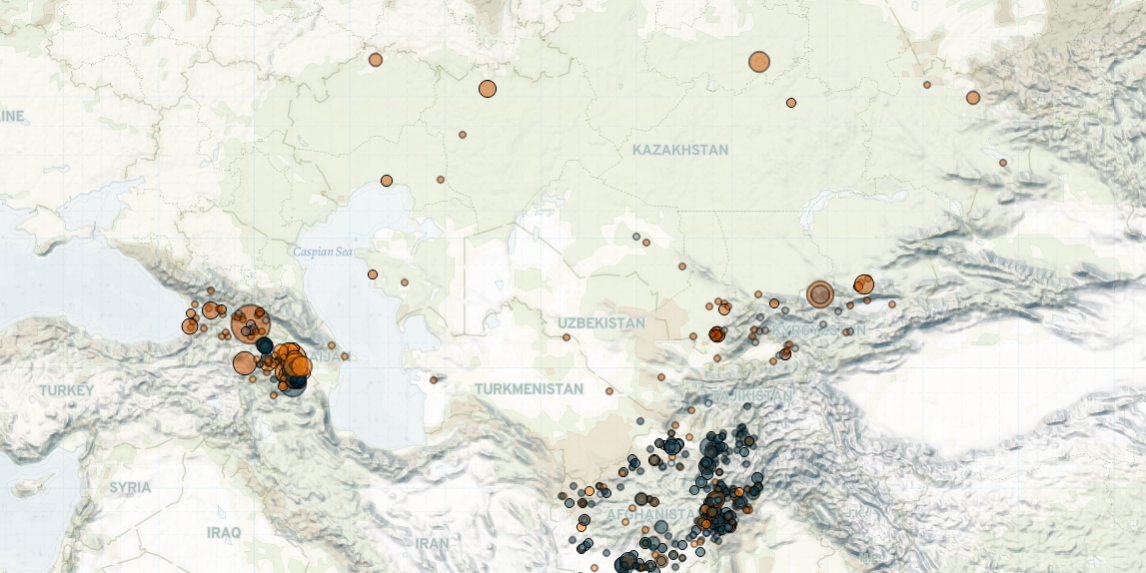 Last week in Central Asia and the Caucasus, clashes between the military forces of Armenia, Azerbaijan and the de facto Artsakh Republic continued despite a second humanitarian ceasefire. In Afghanistan, a massive Taliban offensive in Helmand province was the highlight of the week, as the ongoing violence led the US to reconsider its policy about Taliban attacks in the country. The political crisis created by post-election riots in Kyrgyzstan led to the president’s resignation. Meanwhile, in Georgia, political violence towards party members and activists continued ahead of parliamentary elections.

In the Caucasus, clashes continue along the Artsakh-Azerbaijan Line of Contact (LoC) despite the humanitarian truce between the de facto Artsakh Republic, Armenia and Azerbaijan announced on 10 October. The most severe confrontations continue in the southern, northern, and northeastern parts of the Artsakh-Azerbaijan LoC, in the directions of Martakert and Hadrut regions of the de facto Artsakh Republic, respectively. At the end of the week, Azerbaijan President Ilham Aliev claimed that Azerbaijan’s military forces captured Fizuli city and several settlements in the Hadrut region of Artsakh. Meanwhile, the Azerbaijani and Artsakh sides reported shelling and missile attacks on civilian buildings in Stepanakert, Shushi, Martakert, Ganja, and Mingechevir cities as well as bordering villages. Azerbaijani authorities claim that a missile attack by Armenian forces on Ganja city resulted in 14 killed and more than 50 wounded civilians. The Armenian Ministry of Defense denies this claim. Azerbaijani authorities also reported that non-military groups made up of volunteer fighters from Armenia were involved in the clashes around the Artsakh-Azerbaijan LoC. Armenia reported shelling of military and civilian infrastructure in Kapan and Vardenis regions neighboring de facto Artsakh territory, but away from the frontlines.

As of 20 October, the Artsakh Army of Defense has reported 729 military casualties since the start of the conflict on 27 September. Azerbaijani authorities did not release the exact number of military deaths, although Armenian and Artsakh sources mention thousands of Azerbaijani fatalities (Armtimes, 19 October 2020). ACLED records over 120 events occurring during the period from 11 to 17 October, including battles, airstrikes, downed drones, shelling, and artillery attacks targeting both civilians and security forces of all parties.

After the failure of the humanitarian truce, on 17 October, the Armenian and Azerbaijani ministries of foreign affairs announced a new ceasefire in Artsakh beginning 18 October. However, like the first truce, this one also did not last long. A few hours after the announcement, the clashes resumed (Politico, 18 October 2020). Meanwhile, Russian authorities began to discuss the deployment of peacekeepers and Russian observers to the region, noting that the final decision on format and scope are up to Yerevan and Baku (Gazeta, 14 October 2020). Despite Russia’s efforts to mediate the conflict, the short life of the recent two truce agreements show that the sides are now far from finding common principles which would allow for a restart of negotiations. In his last interview, the prime minister of Armenia, Nikol Pashinyan, stated that the peace talks would be possible only after the agreement on the status of Artsakh. The president of Azerbaijan, Ilham Aliev, said that the status of the region should be discussed only after the withdrawal of Armenian forces (Jam News, 19 October 2020).

In Afghanistan, violence between the Taliban and Afghan forces continued at similar levels last week.  However, ACLED records a 25% increase in reported fatalities from the fighting between the two parties when compared to the week prior. The Taliban has been conducting offensives and claimed territorial gains in Herat, Balkh, Badakhshan, Baghlan, Parwan, and Nuristan provinces. The increase in lethality is partially due to the large Taliban offensive in Helmand province, where numerous clashes took place in Nahri Saraj and Nad Ali districts as the group advanced towards the capital, Lashkargah. The Taliban denied they were attempting to capture the capital and said they had targeted checkpoints outside of the city (Washington Post, 14 October 2020). The fighting in Lashkargah has caused over 500 families to be displaced. Doctors Without Borders (MSF) said the main trauma hospital in the city has reached full capacity (Al Jazeera, 19 October 2020). Furthermore, the US supported Afghan forces with airstrikes last week —  a step the Taliban argued violated their agreement in the peace deal signed with the US on 29 February (Voice of Jihad, 18 October 2020).

Meanwhile, the complete withdrawal of US forces from the country has been rephrased as a ‘desire’ of the current US government by the president’s national security adviser (VOA, 16 October 2020). Following the intensive clashes in Helmand, the US envoy to Afghanistan also stated that they would “reset” their commitment to the peace deal, stating that after a series of meetings with the Taliban, the group agreed to reduce the violence (Military Times, 19 October 2020). High levels of violence are likely to continue in Afghanistan amid these developments.

Meanwhile, the nationwide demonstrations in Kyrgyzstan led to the transfer of power to the opposition. This resulted in a significant drop in opposition riots and protests last week. On 14 October, Kyrgyz parliamentarians elected former lawmaker Sadyr Japarov as the new prime minister, calling for incumbent President Sooronbai Jeenbekov to resign. Jeenbekov’s supporters held a protest in Bishkek on the same day; however, he still resigned on 15 October. Meanwhile, Japarov announced his plans for constitutional amendments so that he can run as a presidential candidate; acting presidents cannot currently take part in elections (RFE/RL, 16 October 2020). The new presidential elections are set for 20 December.

Lastly, as the parliamentary elections scheduled on 31 October draw near in Georgia, violence involving members of major political parties has been increasing. Last week, the ruling Georgian Dream party and the opposition European Georgia supporters engaged in clashes on two occasions while campaigning. At the beginning of the week, another brawl took place after the Kobuleti bazaar administration forbade members of Lelo, another opposition party, from distributing promotional materials. Meanwhile, in Tbilisi, a mob targeted a man for wearing a t-shirt with the prominent opposition party, United National Movement, branding. The latest opinion polls show that competition between the ruling Georgian Dream party and the opposition alliance — formed by the United National Movement, European Georgia, the Georgian Labour Party, and New Georgia — will be tense as one-third of voters remain indecisive or have avoided disclosing their choice (Mtavari, 18 October 2020).