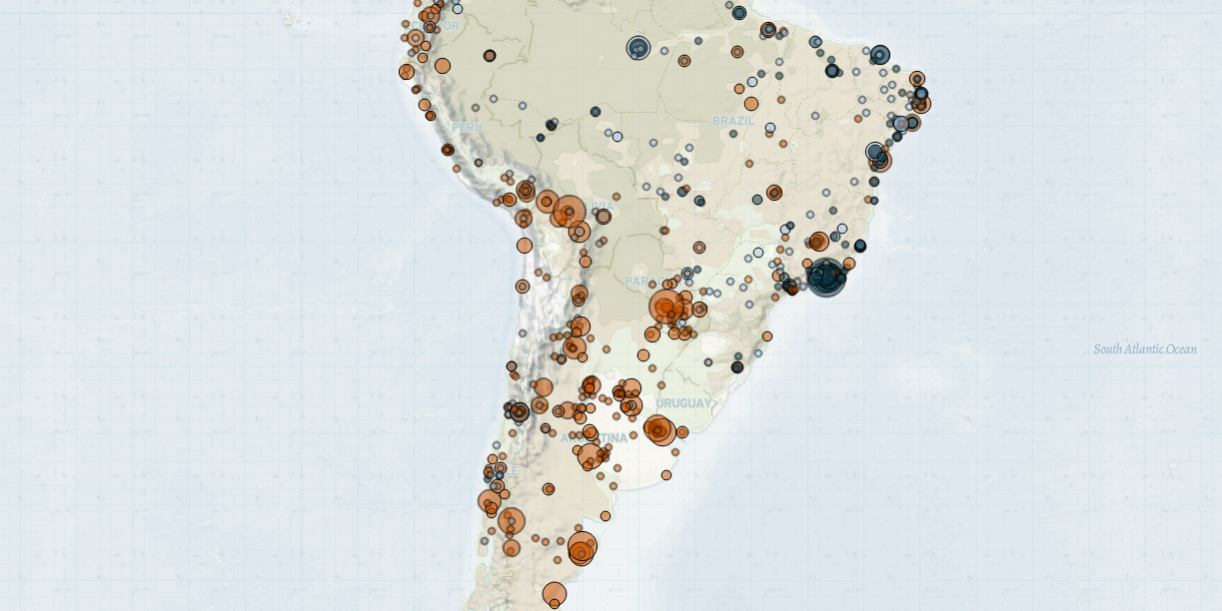 Last week in South America, indigenous groups carried out protests across the region over various demands. Demonstrations over coronavirus-related issues and against the government significantly increased in Argentina. In Bolivia, the week before the elections was relatively peaceful, with few reports of violent events. Tensions increased in Chile in the lead up to the constitutional referendum. In Brazil, armed clashes increased between police militia groups and state forces.

Indigenous groups held several protests across the region last week. On the anniversary of Christopher Columbus landing in the Americas, protests by indigenous groups were reported in Argentina, Ecuador, and Chile. The groups demanded recognition of indigenous rights. In Paraguay, members of different indigenous groups and local farmers gathered to protest in the capital, Asunción. They called for countrywide land reform and an economic plan to help them overcome the effects of the pandemic.

Similarly, in Colombia, nearly 7,000 members of several indigenous communities and farmers have started a motorcade from rural areas of Cauca department to Santiago de Cali, in Valle del Cauca department (El Espectador, 15 October 2020). The protest was organized under the movement known as La Minga Indígena, created in 1991 in southern Colombia to demand autonomy to indigenous territories. Those on the march called for the protection of indigenous and vulnerable groups targeted by armed groups (for more on this, see this recent ACLED piece). Following failed negotiations with state government representatives, the group continued their march towards Bogotá, demanding a meeting with President Iván Duque.

Additionally, in Peru, members of several indigenous communities staged a protest at the 5th station of Petroperu, the state oil company, located in Felix Flores, Loreto department. They demanded the completion of development projects in their communities, as provided for by previously signed agreements with the regional government. The station has been occupied by the group since 28 September. In Venezuela, members of the Wayuu indigenous group protested in Paraguaipoa, Zulia state to demand access to basic services, including gas for domestic use, and the distribution of food bags. State forces intervened in the protest, but no injuries or arrests were reported.

Meanwhile, in Argentina, the number of pandemic-related demonstrations significantly increased, with a nationwide protest held on 12 October. Thousands of protesters took to the streets in several provinces to show their discontentment with President Alberto Fernandez’s handling of the pandemic, which has exacerbated the economic crisis in the country (La Nación, 12 October 2020). With the fifth-highest confirmed case total in the world (Buenos Aires Times, 15 October 2020), Argentina has also been struggling with high inflation rates and a severe financial crisis. Nearly half of the country’s population now lives in poverty (NBC, 1 October 2020).

In Bolivia, tensions decreased amidst a long-awaited general election, which took place on 18 October. During the week, a few clashes between supporters of the Movement Towards Socialism (MAS) — the political party of former President Evo Morales — and supporters of other candidates were reported in Santa Cruz de la Sierra and La Paz cities (for more on this, see this recent ACLED piece). On 19 October, exit polls indicated that Luis Arce, the MAS candidate, won the presidential race. Luis Arce was the Economy Minister under former President Morales (BBC News, 19 October 2020).

Meanwhile, in Chile, tensions increased in the lead up to a referendum to decide whether a new Constitution will be written. The referendum is expected to take place on 25 October. Thousands of demonstrators gathered in Providencia, Metropolitan region to demand government reforms and to call for improvements in the educational and health systems (DW, 17 October 2020).

In Brazil, attacks against electoral candidates continued to be reported for the third week in a row in the lead up to municipal elections expected to take place on 15 November. In Parauapebas city, Pará state, a candidate for city hall from the Brazilian Labor Renewal Party (PRTB) was intercepted by armed men while he was driving. He was shot and injured. In recent years, political killings have been common during municipal elections and have been linked to militia groups (InSight Crime, 3 October 2016).

In Rio de Janeiro state, deadly armed clashes were reported, with more than 30 fatalities. Most of the fatalities occurred during police operations. In Itaguaí city, 12 militia members were killed in a joint operation between the Civil and Federal Highway Police targeting criminal activities during the electoral period. The suspects were connected to the largest active militia in the state, the Ecko Militia, formerly known as the League of Justice (G1, 16 October 2020). A recently released report claimed that as of 2019 police militias controlled more than half of Rio de Janeiro city’s territories. This means that more than 2 million inhabitants are living under the control of militia groups (Folha de São Paulo, 18 October 2020).

Bhavani Castro is the South America Research Manager at ACLED. She holds a M.A. in International Security from the Institut d´Études Politiques de Paris – Sciences Po Paris, and a B.A. in International Relations from University of São Paulo. Her research interests include ethno-nationalist conflicts, communal violence, and non-state armed groups and gender. She is fluent in Portuguese, English, and French and is based in São Paulo, Brazil.
21 October 2020
Share
TweetShare on Twitter Share on FacebookShare on Facebook Share on LinkedInShare on LinkedIn