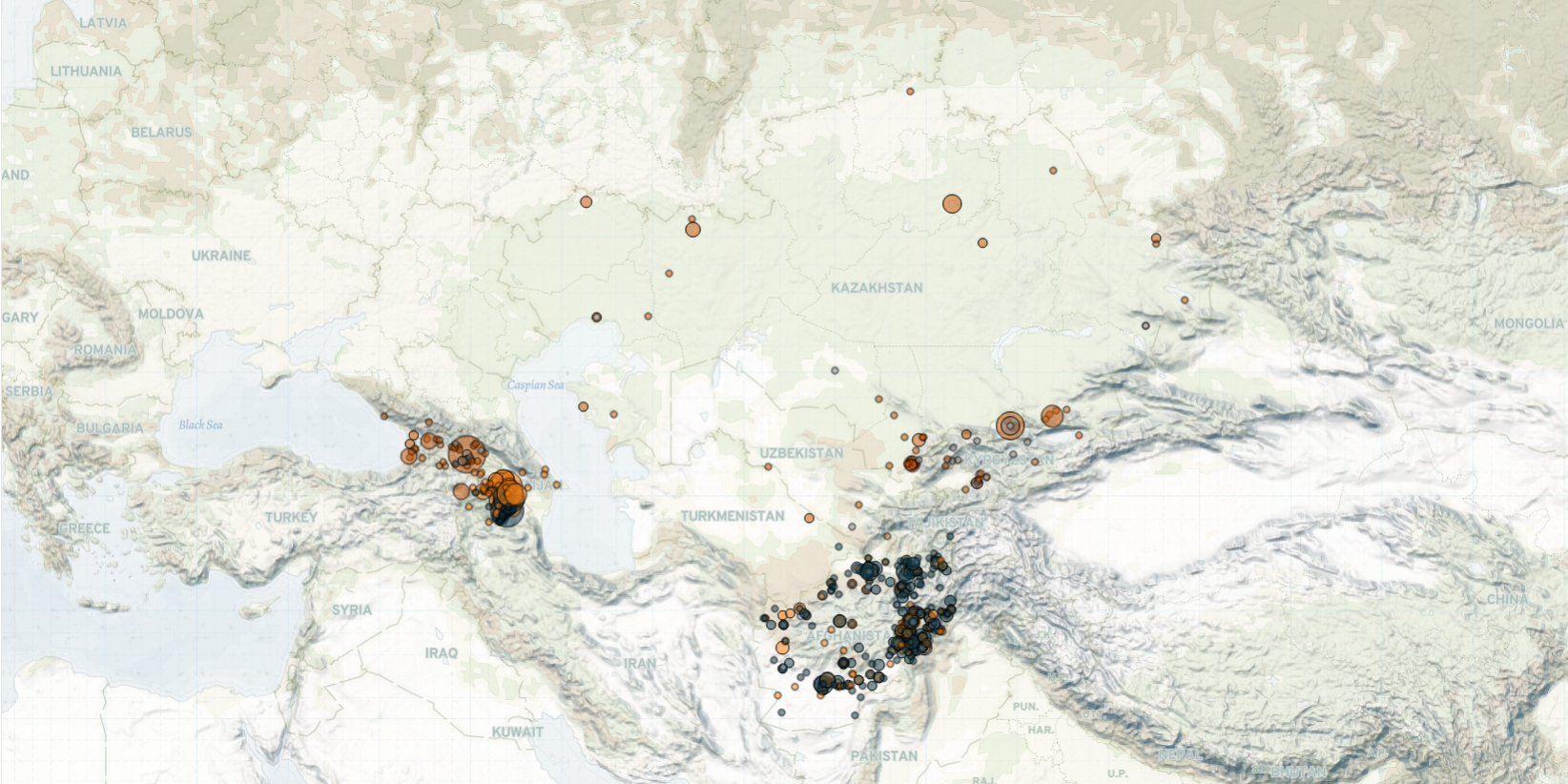 Last week in Central Asia and the Caucasus, high levels of violence between the Taliban and Afghan forces continued, while civilians were targeted by an airstrike and a suicide bombing claimed by the Islamic State (IS). An Afghan intelligence operation targeting Al Qaeda was another key development, especially as it could jeopardize the US-Taliban peace deal. Elsewhere, the number of clashes between the military forces of Armenia, Azerbaijan and the de facto Artsakh Republic increased as another ceasefire was declared and quickly violated by the end of the week. In Kyrgyzstan, post-election disorder decreased as the new acting president, Sadyr Japarov, took steps towards eliminating widespread corruption in the country. In Georgia, election-related violence persisted as two events involving gunfire between the opposition and ruling party members occurred. In Uzbekistan, thousands of workers rioted, demanding unpaid salaries, while a rare protest featuring women took place in Turkmenistan against corruption.

In Afghanistan, lethal clashes between the Taliban and Afghan forces continued as violence remained at high levels, similar to weeks prior. ACLED records over 500 fatalities (from both sides) from 18 to 24 October, about two hundred more than the week prior. The Afghan military ramped up airstrikes against the Taliban, especially in Badghis and Nangarhar. One of the deadliest airstrikes was carried out in Taloqan district of Takhar province, where the Taliban had launched a massive offensive a couple of weeks ago. One of the airstrikes in the region reportedly hit a religious school, killing at least 12 children. Afghan officials first denied the reports, but later announced a probe into the incident. Meanwhile, the Taliban continued its assault on the capital of Helmand province, Lashkargah, while also launching new offensives in Imam Sahib district in Kunduz province and in Dawlat Abad, Chimtal, and Charbolak districts of Balkh province. Furthermore, Afghan forces said they cleared Maimay district in Badakhshan province of the Taliban. The Taliban, on the other hand, claimed they captured bases and checkpoints in Kunduz and Baghlan provinces.

IS and Al Qaeda also surfaced in two separate developments last week, as the fighting between the Taliban and Afghan forces intensified across the country. Afghan intelligence announced they had killed Al Qaeda’s second-in-command leader in Andar district in Ghazni province. The district is largely under Taliban control. A prominent Al Qaeda member found in Andar may mean a significant breach in the peace deal signed with the US, as the Taliban had agreed not to allow Al Qaeda to operate in Taliban-controlled territories (New York Times, 27 October 2020). In another development last week, a suicide bomber killed over two dozen civilians and wounded dozens more during an attack on an education center in Kabul city. IS claimed responsibility. The attack took place in an area that is densely populated by Afghanistan’s Shiite community, signalling that the IS claim may be true. Throughout 2020, IS has conducted three similar attacks targeting Shiite Muslims.

Meanwhile, fighting continued in the southern and northern parts of the Artsakh–Azerbaijan-Armenia Line of Contact (LoC). Last week, the clashes also spilled over into the eastern part of the Artsakh-Azerbaijan LoC, in the direction of Martuni, Martakert, and Kashtagah regions in the de facto Artsakh Republic. Azerbaijani officials reported territorial gains in Fuzuli, Hadrut, and Jabrayil regions, though Artsakh authorities denied many of these claims. ACLED records over 160 events from 18 to 24 October, including battles, airstrikes, downed drones, shelling, and artillery attacks targeting both civilians and security forces of all parties. This marks a 25% increase from the previous week. From 27 September to 24 October, the number of events where artillery and missiles were used has increased and dispersed over the regions away from the frontlines, such as Gegharkunik and Syunik districts of Armenia, and Naftalan, Gabala, Absheron, and Khizi regions of Azerbaijan. These regions are mostly populated by civilians.

On 26 October, Armenia and Azerbaijan agreed on a humanitarian truce again — the third one since the start of clashes on 27 September. This current truce was mediated by the US. However, as with the previous two ceasefires, shortly after the truce was announced, fighting  resumed along the Artsakh-Azerbaijan LoC (BBC, 26 October 2020). On the same day, the Armenian side reported that Azerbaijani forces captured Gubadly city and nearly reached the Armenian border (Aysor, 26 October 2020). This means that the Azerbaijani army is close to Lachin town, which is a strategic area connecting Armenia and the de facto Artsakh Republic.

The failure of the ceasefires mediated by Russia, France, and the US shows that diplomatic solutions are insufficient to stop the fighting. The Azerbaijani army is currently advancing in the southern part of the front line using its military advantage against Armenia (Al Jazeera, 13 October 2020). With Turkey’s support, Azerbaijan President Ilham Aliyev seems to have little interest in the establishment of a permanent ceasefire (Eurasianet, 26 October 2020). Meanwhile, the Armenia Prime Minister Nikol Pashinyan recently stated that the Armenian side is ready for  “compromises,” though implying that the independence of Artsakh would be their red line (Panorama, 26 October 2020).

In Georgia, ahead of the parliamentary elections scheduled for 31 October, two incidents involving gunfire were reported last week. First, an opposition activist from the Force Is In Unity coalition claimed that Georgian Dream supporters fired gunshots at his car in Bolnisi. Two days later, an unidentified armed group approached the Georgian Dream office in Dmanisi and brawled with party members, leading to an exchange of gunfire, injuring several people. This violence also coincides with a period in which coronavirus infections and resulting deaths have increased in the country. Consequently, thousands of people could be unable to vote due to shortcomings in the procedures for registering people in hospitals and in self-isolation for ballots (JAM News, 27 October 2020).

In Uzbekistan, a mass riot took place, involving 5,000 employees of a gas-to-liquids facility construction site in the southern Qashqadaryo region. On 21 October, thousands of workers stormed the facility, damaging the site, after the employer failed to provide food for the workers amid ongoing discontent about unpaid salaries. The riot only ended after the police special forces unit surrounded the facility, and used tear gas to arrest some of the workers. One of the reported reasons for the demonstration was workers not being able to leave the facility to meet with their families, due to ongoing coronavirus restrictions (RFE/RL, 27 October 2020). Although worker demonstrations are rare in Uzbekistan, a similar riot was reported in November 2019, due to unequal pay for Uzbek and Turkish workers at a construction site.

In Kyrgyzstan, the number of post-election demonstrations continued to decrease after the resignation of former president Sooronbay Jeenbekov and the election of former politician Sadyr Japarov as acting president. Last week, Kyrgyz parliament allowed changes in the legislation preventing acting presidents like Japarov to run for the presidency. This week, Japarov announced that he would run for the upcoming election on 10 January 2021. He also launched an anti-corruption campaign and ordered the appointment of new heads for law enforcement bodies. He also ordered the detention of several high-ranking officials (Eurasianet, 23 October 2020).

Lastly, in Turkmenistan, in a rare occasion, about 100 women gathered in Turkmenabat to protest widespread corruption in the renewal of driver licences, which affects women disproportionately. Protesters claimed that renewal of their driving licence, when it expires, tends to take much longer for women. They also noted that their licences are often unfairly seized by police, who often demand bribes of up to 5000 USD to reissue the licence (RFE/RL, 21 October 2020).