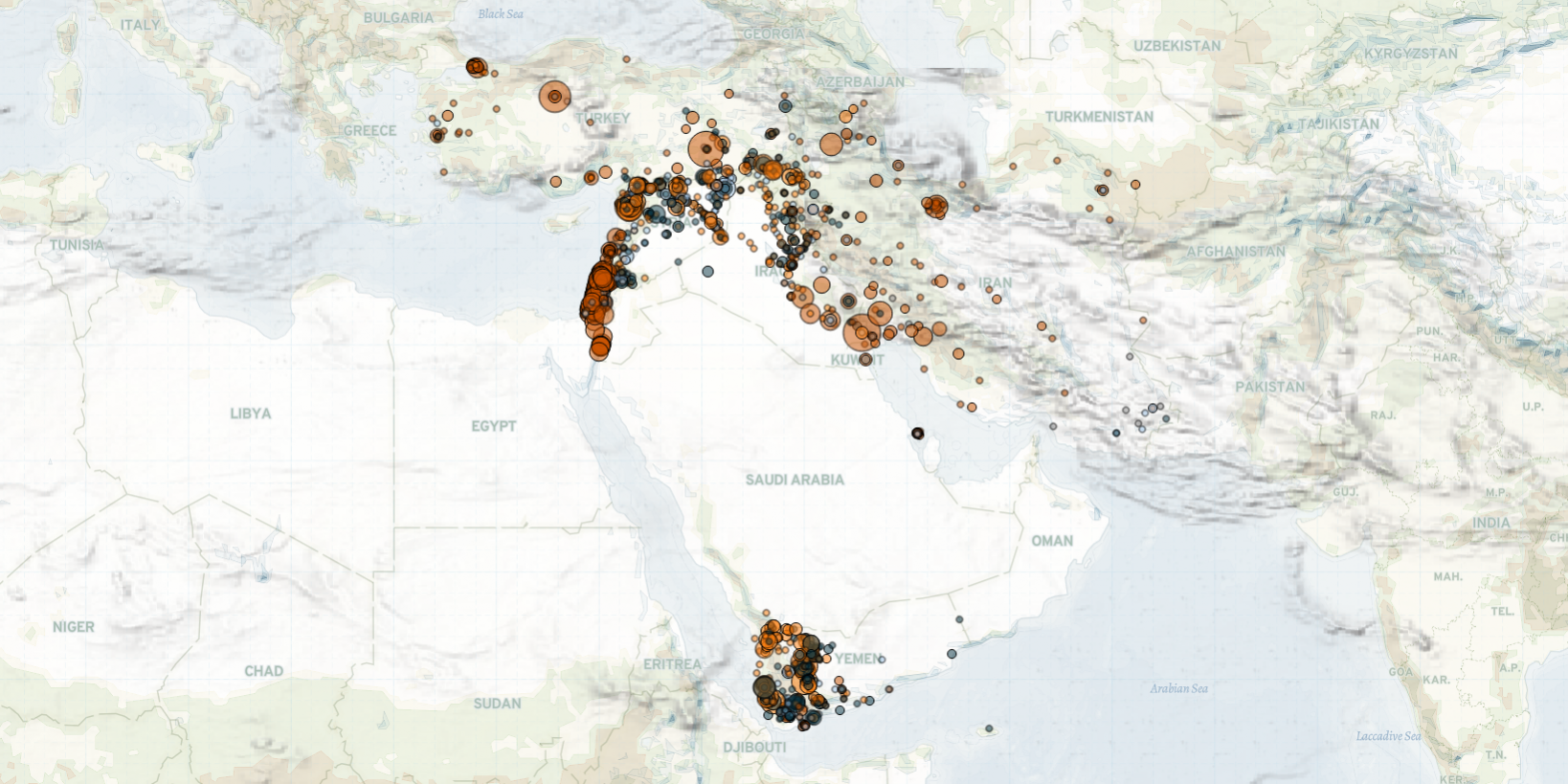 Last week in the Middle East, intense fighting between the Houthis and joint anti-Houthi forces was reported in Ad Ali and Mirab, while renewed clashes broke out between pro-Southern Transitional Council (STC) and pro-Hadi fighters in Yemen’s south. In Syria, both a prominent Sunni cleric in charge of the Damascus region and the head of the reconciliation committee for the south were killed by an unclaimed car bomb outside the capital. Meanwhile, amid anti-Islamic State (IS) clearance operations by regime forces and their Iranian allies against IS in Syria, IS militants carried out several surprise attacks. Anti-IS operations also continued in Iraq, where at least two IS militants were reportedly killed. Elsewhere, Saad Hariri was named as Lebanon’s new prime minister. Finally, several instances of Israeli settler attacks against Palestinian olive farmers and the destruction of their olive trees were reported in Palestine.

In Yemen, Houthi and anti-Houthi forces clashed along most major frontlines during the past week. Fighting was most intense in northern Ad Dali governorate, where joint anti-Houthi forces made some gains. In western Marib, Houthi forces gained territory around the strategic Mas Military Camp, threatening to encircle Marib City from the north. Clashes were also intense in southern Marib and Al Hodeidah governorates, although no significant territory was exchanged on these fronts. In southern Yemen, clashes broke out between pro-STC and pro-Hadi forces after a prolonged period of calm (Debriefer, 22 October 2020). Such clashes come as the two groups negotiate another iteration of the Riyadh Agreement, a power-sharing deal to form a unity government.

Prolonged insecurity continues throughout Yemen, with Aden being particularly devastated by violence. Over the past two weeks, at least two women have been abducted by unknown parties in conjunction with a general rise in violence (Belqees Rights, 20 October 2020). At least four assassination attempts were conducted by unknown parties, highlighted by separate attacks on the financial officer of the Turkish Red Crescent and a leader of the Southern Movement (Debriefer, 23 October 2020). Such insecurity is not limited to Aden, however, as similar attacks, often of a criminal nature, targeted civilians in Ibb, Lahij, Sanaa, and Taiz.

In northwest Syria, Hayat Tahrir al-Sham (HTS) continued to arrest numerous members of the extremist group Hurras al Din in Idleb, in what is assessed to be an effort by HTS to portray itself as a moderate group and a more legitimate actor. Following one operation, an unidentified armed group attacked HTS positions in Idleb city where heavy clashes ensued. Russian warplanes carried out airstrikes on areas in Idleb province and launched three sorties on civilian neighborhoods, wounding six civilians. IS continued their surprise attacks against regime forces and Iranian militias in the Syrian desert, amidst ongoing operations by the latter to clear out IS hideouts and curb their string of attacks.

In southern Syria, an IED went off in Qadsayya in Rural Damascus province killing the Mufti (religious jurisconsult) of Damascus and its countryside along with the head of the reconciliation committee for the south (BBC, 24 October 2020). This assassination is part of a string of attacks in southern Syria that target regime members and affiliates, as well as former opposition members. It comes a week after three prominent anti-regime figures were assassinated on the Damascus-Dar’a highway, which was largely blamed on regime security forces.

In Iraq, demonstrations by recent graduates demanding jobs broke out across the country last week ahead of the one-year anniversary of the onset of protests in Iraq. In Kirkuk province, a mass grave was discovered containing 45 civilian bodies believed to have been executed by IS when they had control over the area (Al Maloomah, 20 October 2020). Elsewhere, and as part of the ongoing anti-IS operations in Iraq, Iraqi intelligence units and the Counter-Terrorism Service (CTS) clashed with IS militants and killed two in Al Abara district in Diyala. Meanwhile, a suspected IS IED targeted a car in Makhmour town in Erbil, killing four family members (Rudaw, 21 October 2020).

Elsewhere, Saad Hariri was named as Lebanon’s Prime Minister-designate on 22 October, after securing a majority of parliamentary votes. Hariri — who is returning to the position of prime minister for the third time — had resigned from the post last year following weeks of demonstrations calling for an overhaul of the political system (for more on demonstrations in Lebanon, see this recent ACLED piece). Two attempts at forming a new government in Lebanon failed since then, amid a deepening economic crisis compounded by the coronavirus, as well as Beirut’s port explosion in August. Hariri has vowed to form a government of non-partisan experts to implement economic and political reforms, as outlined in an initiative proposed by French President Macron (BBC, 22 October 2020).

Skepticism remains about Hariri’s ability to resolve the country’s financial crisis and his willingness to implement much-needed reforms not implemented in his previous governments (Reuters, 22 October 2020). Hariri’s return is also believed to be a big challenge for the anti-government protest movement, with a political activist describing it as “the peak of the counter-revolution” (Al Jazeera, 22 October 2020). However, the popular reaction has been weak so far, with only a handful of demonstrations against his appointment reported last week. According to some experts, the mood in Lebanon now is “one of exhaustion” (Globalist, 25 October 2020).

Finally, in Palestine, several events involving Israeli settlers destroying or looting olive trees belonging to Palestinians, as well as attacks on Palestinian olive farmers, were reported last week. About 45% of agricultural land in Palestine is planted with olive trees, and olive farming is a key source of income for between 80,000 and 100,000 families (OCHA, 19 November 2019). Olive-based livelihoods have been undermined by attacks by Israeli settlers and soldiers on farmers, and the destruction of their farms, which peak during the annual olive harvest between October and November (B’Tselem, 6 January 2002). Since the start of October, ACLED records at least 10 instances of assaults against Palestinian farmers and the looting and vandalism of olive trees, a three-fold increase compared to the month prior.